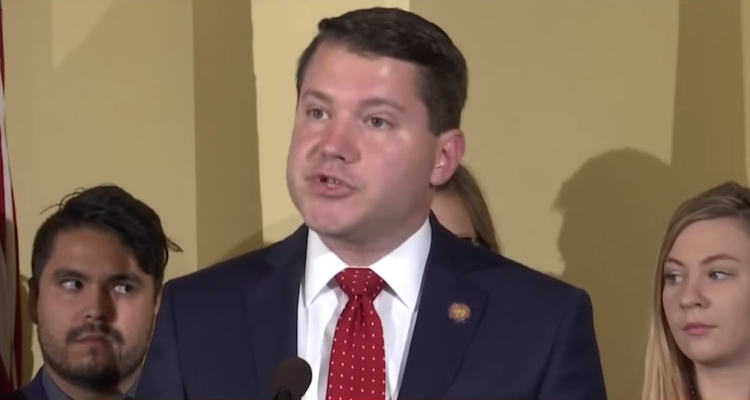 Republican politician Wes Goodman has resigned after “inappropriate misconduct,” but many still want to know one burning question: Is Wes Goodman gay? There are no shortages of scandals in Washington, D.C. and now, it’s the Ohio lawmaker’s turn to face the music. For more details on his resignation, here’s our Wes Goodman wiki.

Wes Goodman’s age is 33 and if you’re wondering about Wes Goodman’s wife, her name is Bethany Goodman. She graduated from Grove City College in 2007 and, according to her blog, she met Wes in Washington, D.C. According to Bethany, when they met they were both “working on Capitol Hill, serving (different) members of Congress from Ohio, and we now live in the Columbus, Ohio area.” According to her LinkedIn account, she’s been the assistant director for the March for Life Education and Defense Fund since August 2013. The couple has no children together, and she hasn’t commented on the news about her husband or the allegations against him.

Goodman resigned after it was made public that he reportedly had sexual relations with a man in his Riffe Center office. Goodman is known for his anti-LGBTQ stance and strong Christian faith. The man in question was not an employee of the state office.

“We all bring our own struggles and our own trials into public life,” said Goodman in a statement. “That has been true for me, and I sincerely regret that my actions and choices have kept me from serving my constituents and our state in a way that reflects the best ideals of public service. For those whom I have let down, I’m sorry. As I move onto the next chapter of my life, I sincerely ask for privacy for myself, my family, and my friends.”

Ohio House Chief of Staff Mike Dittoe was told by a witness regarding what took place with Goodman and his employee. Dittoe then informed House Speaker Republican Cliff Rosenberger.

“I was alerted to details yesterday afternoon regarding his involvement in inappropriate behavior related to his state office,” Rosenberger said in a statement to the Columbus Dispatch. “I met with him later in the day where he acknowledged and confirmed the allegations. It became clear that his resignation was the most appropriate course of action for him, his family, the constituents of the 87th House District and this institution.”

Goodman’s campaign website (which has been taken down) stated his family views: “Healthy, vibrant, thriving, values-driven families are the source of Ohio’s proud history and the key to Ohio’s future greatness. The ideals of a loving father and mother, a committed natural marriage, and a caring community are well worth pursuing and protecting.”

His Twitter, Facebook, and Instagram accounts have also been removed in the wake of the allegations and his resignation. He has always said that he’s a believer in a “natural marriage” between a man and a woman, but the recent scandal has many questioning his sexuality and character. The incident was reportedly consensual and occurred several weeks ago in the state-appointed office. No sexual harassment charges are being laid, but Goodman isn’t the first person in Ohio government to be caught in a scandal. Senator Cliff Hite also resigned last month after his employee reported him for sexual harassment after alleging that the Ohio Republican repeatedly propositioned her to have sex with him.

It seems in the wake of all these sexual assault allegations surfacing, more and more people are coming forward each day to reveal the injustices done to them.  It’s shocking to see how many have already come forward.