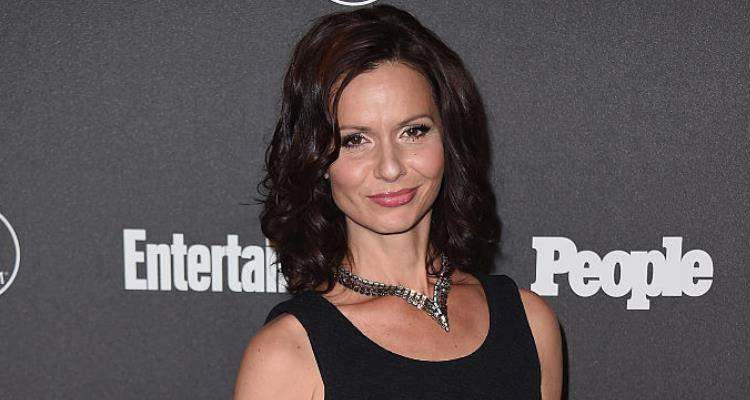 From helping Kevin cook up a perfect Thanksgiving meal to bringing him delicious meals with a smile, Wendy has been doing her best to win over Kevin from day one.

On last night’s episode, Kevin is forced by his business partner, Vanessa Cellucci (Leah Remini), to cut off ties with his pretty neighbor. But we don’t think things have come to an end between the two just yet!

Wendy may have appeared only a couple of times on the show, but she is a big hit with fans. Keep reading to know more about the beautiful actress who plays Wendy on Kevin Can Wait.

Florencia Lozano, 48, plays the role of Wendy on Kevin Can Wait. She rose to fame with the role of Téa Delgado, an attorney on the ‘90s daytime drama, One Life to Live.

Lozano’s character on One Life to Live became so popular that she received fan mail even two years after she left the show! She reprised her role on the show in 2008 until 2012.

While Lozano has appeared in many films, she is known for her roles in the 2007 film, Perfect Stranger (with Bruce Willis and Halle Berry) and The Ministers in 2009.

In 2016, Lozano took on the role of agent Claudia Messina in the Netflix crime drama, Narcos.

As Wendy, Lozano guest-stars on Kevin Can Wait and has already become popular with fans of the show.

We first met Wendy on Kevin Can Wait’s Thanksgiving episode in 2017. She won over Kevin (and us!) with her incredible cooking skills.

After Kevin’s wife Donna’s death, he found it hard to put together a Thanksgiving meal. But with Wendy’s help, Kevin was able to prepare a perfect Thanksgiving meal for his family and Vanessa.

Also Read: The Real Reason Why They Killed off the Wife In “Kevin Can Wait”

Will Wendy Win Over Kevin?

With her constant talking, frequent visits to the Gable home, and amazing cooking abilities, she wormed her way into Kevin’s life. It’s no wonder Kevin called her the “best cook on Seville Lane.”

Everyone knows the real reason for Wendy’s visits, but Kevin thinks she is just helping him out as a single parent.

When Kendra, Kevin’s daughter reminds him that “Wendy wore Spanx to deliver ziti last week,” Kevin plays down Wendy’s interest in him and claims that all he cares about is the food.

Lozano posted this picture on Instagram before the episode aired. Dressed in a floral print apron, Lozano described herself as “‘Wendy’ the kooky cooking neighbor!”

Food…specifically my delicious (Swedish meat) balls are the way to his ❤️. Check me out as “Wendy” the kooky cooking neighbor on Kevin Can Wait this Monday March 5th on CBS at 8pmEST. #DINGDONGIt’sWendy!” #justplaindingdong #nextdoorneighborshenanigans #foodasseduction

Will Wendy finally succeed in seducing Kevin via her home-cooked meals? Keep watching Kevin Can Wait to find out!