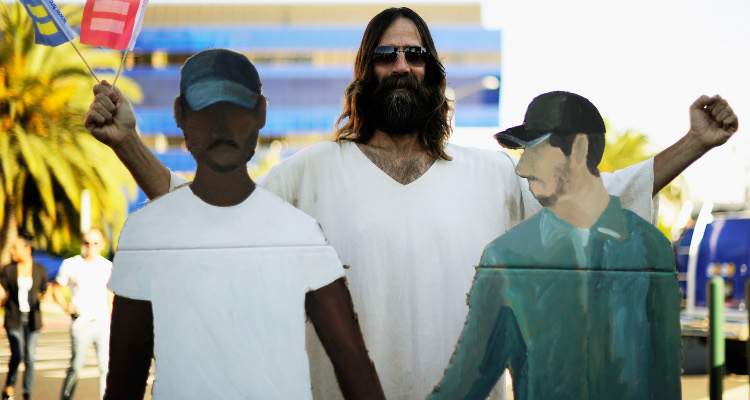 If you need more confirmation that 2017 was out to take away every famous person we love, here it is: WeHo Jesus (Not O.G.) is dead. West Hollywood officially got sadder.

West Hollywood has its fair share of eccentric residents —from every budget-version of an Avenger, to cuddly favorites like Elmo and Tom & Jerry. But there is only one Jesus West Hollywood recognizes and it’s Kevin Lee Light (or Kevin Short), who stopped for pictures and gave out rad high-fives. WeHo Jesus will be missed. Read about Kevin Lee Light’s death here.

There’s not much known about Kevin Short, or Kevin Lee Light , the man behind the Biblical garb and neat beard. According to comedian Jason Farone, who always wanted WeHo Jesus’ sandal style, Short’s day job was a building manager in West Hollywood, “which is weird, because the original was a carpenter.”

But he’s most memorable for walking down the streets of West Hollywood in a flowing white robe and sandals, with the wind in his long brown hair and trimmed beard. He’d pose for pictures with tourists, often have celebrities flock to him, and spread his arms out to redeem any bad pictures.

He joined the Pride Parade in Hollywood and blessed celebrity events with his presence both in L.A. and abroad. He’s most memorable for telling a lot of people that they are loved and special, and was everyone’s cheerleader.

Sadly, this iconic Jesus won’t be seen around anymore. Short passed away before Christmas, on December 13. He reportedly died after being hospitalized in Cedars-Sinai for pulmonary issues. He was 57.

12 hours he's still going like a locomotive Anthony Chirco I LOVE YOU so much fun!https://t.co/T7DW8bDOMo pic.twitter.com/vG3liczzPJ

His friend and neighbor, Brian Hamilton shared the news on his Facebook page. “I have just confirmed the sad news that my friend and neighbor Kevin Short, aka ‘WeHo Jesus’ or Kevin Lee Light, has died after a brief illness,” wrote Hamilton, “We’ve lived across the street from one another for over 20 years. I hadn’t seen him in a few weeks, so I tried calling him & voice mail was full. Then I sent an email. No response. Kevin’s neighbor Wes who also lives in the same building just confirmed he has died.”

As an actor, he almost appeared in comedic public information videos by the city. Contrary to his humble appearance, Short was rumored to come from money. He dined in expensive restaurants, drove a Mercedes, and attended exclusive parties.

RT @ThePerezHilton: So very saddened to hear of the passing of West Hollywood Jesus! An icon! May you rest with the real Jesus! And 2018 better not take from us the Rosas lady!!!! #KevinLeeLight #WeHoJesus #KevinShort pic.twitter.com/U6M1E9dplB

Since news of WeHo Jesus’ death broke, fans have flooded Twitter with an outpouring of grief. Many added a touch a humor as it went well with WeHo Jesus’ style. This Jesus had a more quiet passing than the original, but fans are nevertheless praying for his second coming.

R.I.P. Kevin. You won’t be forgotten.

I am really sad to hear of the passing of “WeHo Jesus” (Kevin Short). I will miss seeing him around our neighborhoods. Rest In Peace. #weho pic.twitter.com/gfOR0VEQUB