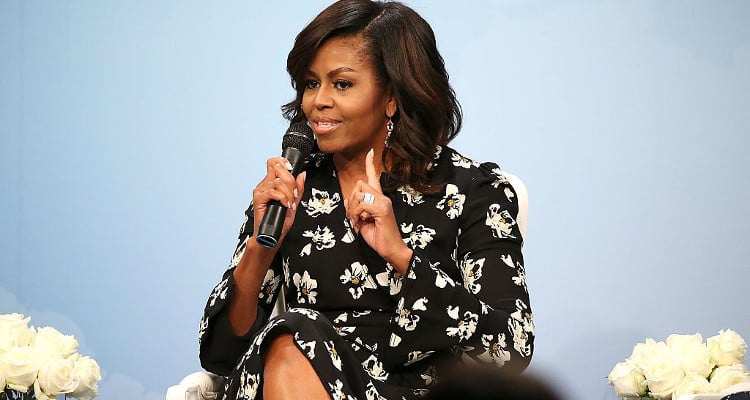 Michelle Obama gave one of the best speeches of her life in New Hampshire on Thursday. She spoke about why voters must come together to ensure Hillary Clinton wins the election. She also painted a bleak picture for the future girls and women, should Donald Trump win. She spoke in depth about Clinton’s achievements and why she deserves to occupy the Oval office for the next four years.

Sometimes a speech captures the raw emotion of the moment and embodies what people are feeling, but struggling to express. This kind of speech has the power to change minds and lead them in a new direction. The Michelle Obama speech in New Hampshire was this kind of speech, and it has garnered much attention. All those who saw Michelle Obama’s speech video on TV or YouTube can’t help being transfixed by her eloquence and passion. Michelle Obama’s speech on October 13, 2016 was clear, bold and cut right to the heart of the matter.

Obama spoke about the contrast in the characters of the two presidential candidates, Donald Trump and Hillary Clinton. This speech was given in New Hampshire, after the 2005 tape of Trump bragging about his aggressive behavior with women went viral. Obama spoke about Trump’s comments on women, without repeating Trump’s indecent words. She refused to repeat Trump’s words because they were so derogatory to women. She said that Trump was a bigot and a bully, who disrespected women and treated them like they were less than human.

Why Clinton Deserves to be President

She spoke about how important it was for decent minded men and women to come together and stop Trump from becoming the president of the United States. She said that the way to do this was by coming out in full numbers on November 8, 2016 and to vote for Hillary Clinton. Obama spoke about how Clinton has worked hard all her life to solve problems and help people, right from the time she was young. Obama listed out Clinton’s achievements and contributions to society over the years, stemming from the time she was in college. Obama even said that when it came to working for the people of America, Clinton had accomplished more than even Barack Obama and Bill Clinton.

Clinton’s Not One to Walk Away

Obama said that Clinton had never walked away from her responsibilities, both in her personal and professional life. She has been a loyal wife and a caring mother, who raised a wonderful daughter. Clinton has held vital posts throughout her political career and there was no one in America who was more deserving that her to become the next president of the United States. This endorsement by Obama is sure to get more voters onto the Clinton camp.

Bleak Future for Girls and Women

Obama painted a bleak picture for girls, women and even men, if Trump were to become the next president. She asked the audience if they could justify Trump’s character to their daughters and sons. She made people think about what message would go out to young girls and boys if a man, who uses such demeaning language about women, becomes president? Obama said that decent people all over America owed it to their children and families to defeat Trump by casting their important vote against him. This way they could show the world that it is not acceptable for young girls and women to be treated like cattle.

Being a Woman is Incidental

Michelle Obama’s speech was powerful and timely. New Hampshire is an important state and has a big role in the presidential election. The audience, who all support the Clinton-Kaine ticket, clapped and cheered Obama as she gave one of the best speeches of her life. She made it very clear that Clinton deserved to be president because of her abilities. The fact that she is a woman was just an incidental matter, and if Hillary were a man, these vital points about the way Trump degrades women would remain the same. In a few weeks we will know if the voters in America agree with Obama.

To listen and watch the entire Michelle Obama speech, just click below: