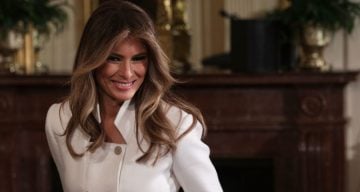 First Lady Melania Trump is seen flinching when her husband, President Donald Trump, touches her. The video has since gone viral, further fueling rumors of the First Lady being abused.

With the month-old Trump administration in the middle of consecutive controversies regarding cabinet appointments and decrees, it’s surprising that First Lady Melania Trump managed to make an appearance. However, a new viral video has brought the President and his wife under the spotlight, and not in a good way. A video of Melania flinching at Trump’s touch has sparked speculation that the former model is being abused. If you haven’t seen the video that’s created a wave of controversy, you can watch it right here.

Is Melania Trump Being Abused?

President Trump and his wife, Melania were addressing a campaign-style rally in Florida last Saturday (February 18). It was a rare public appearance by the First Lady since Donald Trump took office. Melania Trump has deferred most of her First Lady duties to Ivanka Trump while she stayed back in New York for their son Barron to finish school.

Melania Trump opened the rally by reciting the Lord’s Prayer before introducing her husband, whom she calls “the pinnacle of civility and unity.” A video of Melania Trump’s opening speech became viral. Watch a clip of it below:

The video shows Melania Trump, who was all smiles before giving the invocation, until Donald Trump came over and touched her arm. As he touches her, Melania seems to flinch, pausing before beginning her speech.

Since the video has gone viral, the Twitterati have had a lot to say. There is some worry that Melania Trump is being abused by her husband and is suffering from PTSD. Others think her reaction is a physical revulsion towards her husband. Certain users have speculated that Melania Trump’s flinch was an indication of fear towards her husband. The video resulted in the hashtag #FreeMelania trending on Twitter in a matter of hours.

Many people do not think that the First Lady is being abused. People have brought to light that she could have simply been startled, like anyone would be with unexpected contact. Some do no see Melania Trump’s reaction as a recoil or flinch, seeing it instead as a “warming squeeze” or reassuring touch to calm her nerves.

This isn’t the first time reports of strained marriage between Melania and Donald Trump have surfaced. Last month, at Donald Trump’s inauguration, a clip of Melania frowning started rumors of marital problems between them. In the clip, Donald Trump has his back to the camera and is talking to his smiling wife. Once he turns towards the camera, her smile immediately falls. Neither have addressed the video.