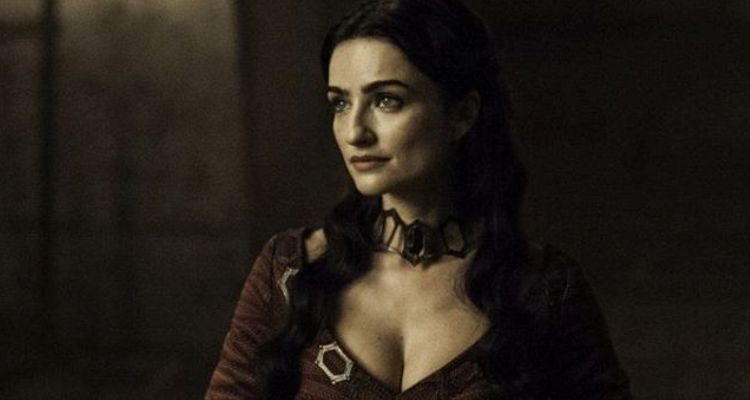 Let’s take a quick step back, first. Melisandre, the current Red Woman we’ve grown to despise until she brought back Jon Snow, now believes that he is the Prince promised by the God of Light. She tells Ser Davos as much near the end of the last episode, literally saying, “He was the Prince that was promised.” For all the Jon Snow fans out there, that may or may not be a good thing, seeing what happened to Lord Stannis, the last leader Melisandre thought was the promised Prince. We’ll keep our fingers crossed though.

Taking it back one step further to episode 3, you may recall a brief moment in which Tyrion crossed paths with a priestess preaching to a small crowd and claiming that “the Lord of Light of hears your voice. He has sent you a savior. From the fire she was reborn to save the world: A Dragon Queen.” A bit of foreshadowing, it seems, as the full revelation of the Red Woman is upon us.

That brings us back now to the new Red Woman. In the Game of Thrones season 6, episode 5 promo, she is seen speaking to Tyrion and Varys in Meereen’s throne room telling them that “knowledge has made you powerful, but there’s still so much you don’t know.” Assuming that she is of the belief that Daenerys is her promised savior, this puts her at odds with Melisandre and her presumption that Jon Snow is the one who will unite the Seven Kingdoms.

Though this all seems new, the Game of Thrones season 6, episode 5 leak really happened last year. Referred to as the Game of Thrones “The Door” episode, an audition video leaked with a different actress repeating the same words the new Red Woman says in this week’s preview. Actually, she says a lot more. In the video leaked online, the actress identified as Tehmina Sunny announces herself as Kinvara, exclaiming boldly that she is the “High Priestess of the Red Temple of Volantis, the Flametruth, the light of wisdom, the first servant of the Lord of the Light.”

Tyrion seems more accepting, but Varys is far more skeptical. Either way, it makes for some great possibilities. And the insertion of another Red Woman leaves fans wondering whether she will be as sinister as Melisandre, or if she has other more peaceful intentions.

So, let’s bring Game of Thrones season 6, episode 5 all together. There’s a new Red Woman. She’s in Meereen speaking to Tyrion and Varys and believes that Daenerys is the promised leader to unite the Seven Kingdoms. Also in the Game of Thrones season 6, episode 5 promo, Sansa confronts Littlefinger about Ramsey, and Cersei questions if the Knights of the Veil are ready to “fight for their king.”

Yup, it’s just another day in Westeros. And if you’re a die-hard fan, you’re not going to be able to hold your breath much longer. They really need to start making these episodes two hours long because one hour is not enough to really get a fill of everything GoT has to offer. And as if you need a reminder, Game of Thrones season 6, episode 5 goes down tonight (Sunday, May 22) at 9:00 p.m. on HBO. You can stream the show on HBO NOW and if you already have a subscription to Roku, just ass the HBO NOW channel to your playlist!