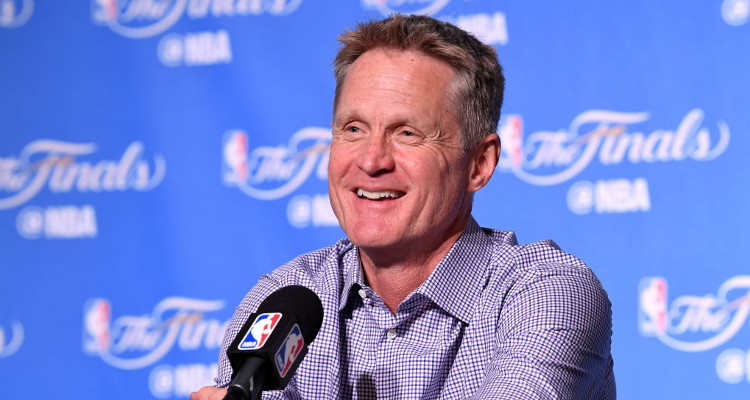 Steve Kerr could not coach the Golden State Warriors at the start of the NBA Finals due to back pain issues. But now, he has returned with his signature humor and words of praise for his team.

The Golden State Warriors are the favorites to win the NBA 2017 Finals, but had to start the championship without their coach. Steve Kerr’s illness had him sidelined for a while, but he made a comeback in Game 2 against the Cleveland Cavaliers. The Warriors won the game and Kerr can’t stop praising his star duo, Kevin Durant and Stephen Curry. What happened to the Warriors coach? Find out right here in our Steve Kerr wiki.

He Was Born in Lebanon

Steve Kerr was born in Beirut, Lebanon to Malcolm H. Kerr and his wife, Ann. Kerr also has three siblings; Andrew, John, and Susan. His father, an America citizen born and raised in Beirut, was a university professor of political science, specializing in the Middle East and the Arab World.

Steve Kerr spent most of his childhood in Lebanon and other Middle Eastern countries. He attended the American Community School in Beirut, Lebanon, Palisades High School (now Palisades Charter High School) in Los Angeles, and Cairo American College in Egypt.

He Did Not to Attend His Father’s Funeral

Malcolm Kerr was an assistant professor at the American University of Beirut’s Department of Political Science. The family divided their time between Lebanon and California. Civil unrest in Lebanon didn’t allow the Kerr family to return to Beirut for a long time. Malcolm was selected to be President of the American University of Beirut in 1982. Only 18 months after his appointment, he was shot and killed by two gunmen associated with the Hezbollah group, for reasons unknown.

Steve Kerr was a student at the University of Arizona at the time, when a family friend relayed him the message of his father’s death. His teammates said that, following the news, Kerr did nothing but walk around the streets aimlessly and came back much calmer. He didn’t fly to Beirut for his father’s funeral. Instead, he attended basketball practice and played against Arizona State. He played the best game of his freshman season that year. For him, playing basketball was “cathartic” and was what he needed in order to cope.

The Kerr family sued the Iranian government under the Antiterrorism and Effective Death Penalty Act of 1996. When he played against Arizona State again, Kerr was heckled with shouts of “your father’s history.” An angry and tearful Kerr scored 20 points in the first half, making all six of his 3-point attempts. The Athletic Director of Arizona State, Charles Harris, sent an apology letter to Kerr a few days later. To this day, Kerr opts for comedies instead of action films so he doesn’t have to wince at the sound of a gunshot.

While playing for the University of Arizona, Kerr was part of the last USA Team in the FIBA World Championship (which consisted of amateurs) to win a gold medal. An injury caused him to miss a season with Arizona. He was a second round pick at the 1988 NBA draft by the Phoenix Suns. He’s played for the Cavaliers, Orlando Magic, Chicago Bulls, San Antonio Spurs, and Portland Trailblazers.

Steve Kerr retired from playing in 2003 and became a broadcast analyst for TNT. But he put his broadcast days behind him to work in the Phoenix front office as the team’s manager. He briefly returned to broadcast before becoming the most sought-after coach in the NBA. He became the head coach of Warriors and was named the Coach of the Year in the 2015-16 season. He has earned a net worth of $18.0 million in his long career, with an annual salary of $5.0 million.

He Chose to Coach the Warriors for His Daughter

Kerr married his college girlfriend, Margot Brennan, in 1990. The couple has three children —Maddy, Nick, and Matthew. Nick played basketball for San Diego, while Maddy played volleyball at the University of California, Berkeley.

When Kerr was in the running for head coach, several teams wanted him. Everyone thought he’d go for the New York Knicks since his old coach, Phil Jackson, was there. The Warriors also had the potential to become an excellent team under the 51-year-old’s coaching and guidance. In the end, he went with the Warriors because of the location. California has been Kerr’s home for years and he wanted to stay close to his daughter.

What Happened to Steve Kerr?

Steve Kerr’s health has held him back from coaching as he has been suffering from chronic back pain since he underwent surgery for a spinal cord leak. He took an indefinite leave to recover during the NBA Finals this year.

In Kerr’s absence, Mike Brown stepped up as his replacement. While many were worried for the Warriors, the team took their coach’s absence as a motivation to play better. Eventually, when Kerr returned to the court in Game 2, he was greeted by a standing ovation and roaring cheers from the crowd.