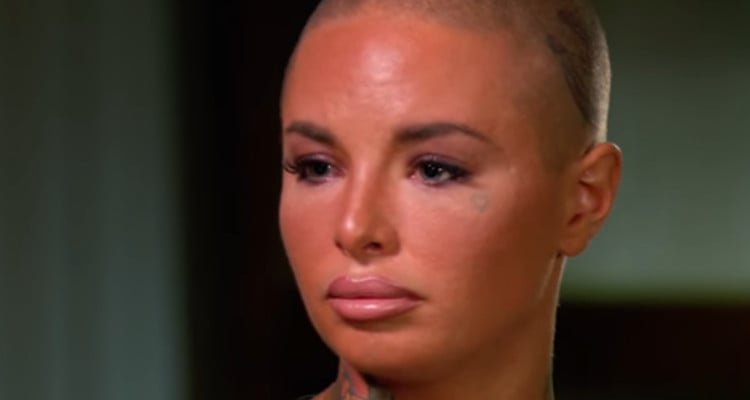 Christy Mack finally got the justice she fought for as her ex-boyfriend and former MMA fighter, War Machine, was sentenced to prison for life with the possibility of parole after 36 years. Here is everything you need to know from Christy Mack’s wiki.

Jonathan Paul Koppenhaver (a.k.a. War Machine) was sentenced to life imprisonment for kidnapping, sexually assaulting, and beating his ex-girlfriend, Christy Mack. He will be eligible for parole in 36 years, when he will be 71 years old.

The sentence was announced on Monday, and Christy Mack broke down saying, “I do know that when he gets out he will kill me.” Keep reading for more details about War Machine’s ex-girlfriend, and his trial, right here.

Christine Mackinday was born in South Chicago Heights, Illinois on on May 9, 1991, which makes her age 26. She spent most of her childhood in Edinburgh, Indiana, and goes by Christy Mack.

Start to Her Career

Here's a pic of me embarrassing my dog with my butt flexing.

In 2012, Mack started her career in pornography. After garnering success in the industry, Mack launched a website with Puba. In 2015, she announced her retirement from the adult film industry.

Mack started getting inked before she turned 16. She was an amazing painter and says that she designed most of her tattoos. The first tattoo she got is on her lower back; a nautical star with sparrows. She has “Love Sick” tattooed on her knuckles. According to Mack, having tattoos makes her feel beautiful and, “the more tattoos I get, the more beautiful I become.”

#ThrowBackMack to a photo by @ericcoleman1 and makeup by @krissyaye and hairstyling by me. I think I did a good job.

At the age of 18, Mack tied the knot with her high school boyfriend. Three years later, she was offered to pose as a nude tattoo model, so she left her husband and moved to Miami. She was then in a relationship with former MMA fighter, War Machine, and the two were featured in the January 2014 issue of Hustler.

Christy Mack was Beaten Up by War Machine

2 days, 2 weeks, 4 weeks, and last night.  I've had several dentist visits to make eating more comfortable and make my smile look more normal. I still have a few more dental visits to go. I've had my eyes checked out and made aware that I'm very lucky to have my vision where it is, since the muscle is tethered by the fragments from the blowout fracture in my left eye. My multiple nose fractures will be fixed in the next couple of months. While they're fairly symmetrical, my nose is shifted on the inside and out causing breathing issues. (I also make everyone feel how my bone sticks out on the left side because it feels so weird.) My top lip will regain movement in less than 6 months… looking forward to using straws again.  My liver seems to be alright. I was admitted back to the hospital shortly after I was released the first time for some minor treatment, but I did not have to have surgery. While my face is starting to look decent again from the swelling going down, it is still not my own. Cutting what was left of my hair off, and losing 15 lbs(it's a lot when you're 5'1") made me feel even further away from myself. It's hard to look in the mirror every day and see someone you do not know. After having makeup done and dressing up for yesterday's charity event, I felt much better about how I look now. It made me feel more normal, and beautiful for the first time in a very long time. The event that I went to was for Face Forward. A non profit charity that funds surgeries for women and children that have been in horrible situations that require them to have reconstructive surgery. They are not funding me, my surgeries are being donated by other doctors. I met many wonderful people and look forward to working more with them in the future.

In 2014, Christy Mack and her friend Corey Thomas were assaulted by War Machine in her Las Vegas home, after the former MMA fighter accused the two of having an affair. Mack was taken to the hospital after having broken ribs, missing teeth, a lacerated liver, and a broken nose and eye socket. War Machine was sentenced to 36 years in jail after being convicted on 29 counts, including kidnapping and attempted rape.