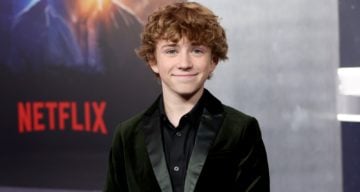 A Percy Jackson and the Olympians reboot is in the works! The upcoming Disney+ series has cast its three main stars. Walker Scobell will play the role of Poseidon’s son, Percy Jackson, which Logan Lerman portrayed in the original film series. You might recognize the young actor from a recent A-lister movie that premiered on Netflix called The Adam Project. Scobell earned attention for his acting talent from the get-go, making his version of Percy Jackson a much-anticipated project. He is slated for a long career in the acting industry. So, we trace his early beginnings in this Walker Scobell wiki.

Walker Scobell was born on January 6, 2009. He grew up in a military family and has lived in many places.

He is the middle child of three born to Heather and Pete Scobell. He has an older sister, Leena, and a younger brother, Tanner.

Walker’s dad, Pete Scobell, is a former Navy SEAL, a competitive skier, and a country musician. After retiring from his military career, Pete and Heather moved to Colorado with their children in 2012. Walker spent the majority of his childhood there.

Walker Scobell caught the acting bug through drama class in school. On a trip to California, the young Walker had decided to pursue acting professionally.

Currently a student of Fairview Middle School, Scobell auditioned for the Disney+ reboot of Percy Jackson and the Olympians series. Months later, he made his acting debut in Netflix’s The Adam Project alongside Ryan Reynolds and Zoe Saldana.

While he was earning critical acclaim for his first on-screen role, Rick Riordan announced in April that they had cast Scobell to play the titular character in the upcoming Percy Jackson series.

“Walker Scobell is an incredibly talented young man who blew us away with his audition tapes for the role of Percy,” Riordan, the author behind the demigod YA novels, said in a statement. “It was obvious to me and the rest of the team that Walker had the perfect mix of comedic timing, sweetness, rebelliousness, snark and heroism to embody our hero Percy Jackson.”

The Percy Jackson and the Olympians series, which recently cast its Annabeth and Grover roles, won’t premiere until next year. But you can still catch Walker Scobell in his upcoming projects that are reportedly in post-production.