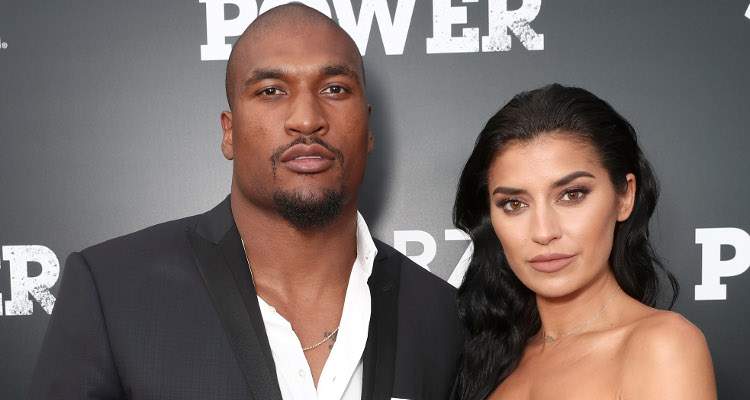 Larry English and Nicole Williams’ wedding was in May this year, and it was beautifully captured and aired on WAGS LA last night! Check out how she made it big in the fashion industry, along with some facts you never knew, right here.

Larry English is one lucky guy! He and Nicole Williams are enjoying married life, but fans had to wait for details about their ceremony. The wait ended last night when their wedding aired on WAGS LA. It was a beautiful Laguna beach ceremony, and Williams’ flawless dress made her the perfect bride. Here’s a look at Nicole Williams’ wiki to help you get to know her better.

#1. From Canada to America

Nicole Williams is from Toronto, Canada, and was born on October 30, 1987, making her age 30. She came to the U.S. to become a model. Williams has been associated with some of the biggest modeling agencies like Wilhelmina Models, FM London, Next Toronto, and Major Models New York.

Nicole Williams started dating San Diego Chargers linebacker Larry English in 2012 and has been by his side ever since. She was already an international model when the reality TV show offer came to her, and it was the perfect opportunity for her to reach new fans. WAGS LA season 3 saw a lot of hookups and breakups, but it wrapped up perfectly with a two-part finale. The first part had Williams leave her bachelorette party to check in on Larry in Colombia, with the second part showing their big day.

Who's tuning into #WAGS tonight!??

English popped the question after four years of being together. Seeing that six-carat diamond ring, we’re sure she didn’t think twice before saying yes!

Larry English and Nicole Williams tied the knot on Laguna Beach, Southern California. The perfect setting was created with a wispy floral archway under which the couple took their vows. It was a beautiful outdoor wedding, with the bridesmaids in black, and Williams in a figure-hugging lace dress.

Mr. & Mrs. English were introduced for the first time and had their first dance on a floor that featured a giant N & L monogram. Check out some Instagram pics of Nicole and Larry’s wedding right here!

It's been SO hard keeping this a secret for so long!! Thanks to everyone for being so kind and supportive throughout this journey! My heart is so full!❤️ I get to marry my best friend! Pinch me! ekkkkk!! ?? Thank you SO much @ritani for helping Larry design the most beautiful ring my eyes have ever seen! ?

I married my best friend this past weekend, it was the happiest moment in my life! I love you baby with all of my heart! ??❤️?? Thank you @javenonline for our vows and pronouncing us Husband and Wife! I want to take the time to thank @avant_garden for designing our fairytale ceremony, the flowers and arch were absolutely breathtaking!! When I walked down the aisle for the first time I couldn't believe my eyes. You made our vision come to life and this brides dream come true ?Thank you to @alissahussey our wedding planner for making all of this come together and organizing the most magical and beautiful evening that we will never forget!! ?? Thank you also to @theartistsllc orchestra for the beautiful ceremony music, it was so beautiful. ? Lastly… my dear friend @michaelcostello … I have no words to describe the love and appreciation I have for you. You made the most perfect wedding dress for me, two reception dresses and 12 bridesmaids dresses… I will forever be grateful for your kind and sweet soul!! We did it!!!!! These beautiful images captured by the amazing @dukeimages ? @montagelaguna #NicandLarry #MrandMrsEnglish

By beautiful bridesmaids!! The best friends and sisters a girl could ever ask for ❤️ I'm so grateful for each and every one of you. You all hold a special place in my heart and to share this day with you was something I'll always cherish!!! Thank you for being the amazing women you are and thank you for being in my life! ?❤️?❤️?❤️?❤️?❤️? @michaelcostello designed 12 different gowns, each gown to compliment their individual personalities, I wanted everyone to feel like themselves and to feel beautiful! ? We love you Michael! Bridesmaids makeup @beautybycarriepurser ?Photo by @dukeimages ?

First dance as Husband and Wife! ????thank you @djtendajilathan ? Also can we talk about how cute this design is of our initials by @darlamariedesigns ! Thanks for making this possible @alissahussey ? Photo by @dukeimages