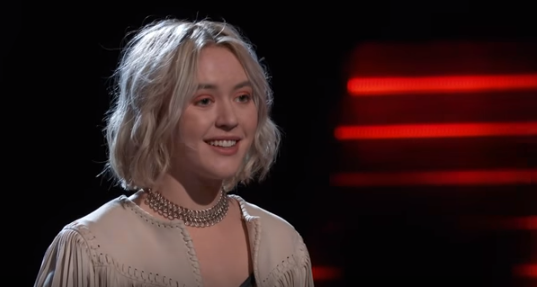 Last night’s Knockouts round on The Voice included some strong performances, and one of the artists received the honor and excitement of being stolen! The Voice’s Chloe Kohanski is getting to stay on the show, and if you want to learn more about her, check out our Chloe Kohanski wiki.

Chloe Kohanski, age 23, sang an emotional song that showed off her lower range, control, and raspy voice. The judges seemed blown away by her performance, but she lost the battle against Ashland Craft, who sang “Wanted Dead or Alive.” Thankfully, as Kohanski was saying her goodbyes, Jennifer Hudson and Blake Shelton both hit their buzzers for an epic “double steal!” It was a tough choice, but Kohanski sided with Shelton as her new coach. “I have wanted you on my team every single time you’ve set foot on that stage,” he told her.

As soon as Chloe Kohanski’s audition began, people commented that she sounded very much like Miley Cyrus. Even her outfit and movements were similar to Cyrus’ performance mannerisms. While the judges fought over her, she decided to go with her idol. “Turning around and seeing your style, you really know who you are,” Cyrus said. “Any my foundation is really knowing who I am. We’ve got a very similar range, so I think I know songs that would be great for you.” It was to Cyrus’ delight that Kohanski said, “Well, I’m obsessed with Miley, so I choose Miley.” No surprise there!

She graduated from DCA in 2012, and had a music and academic scholarship to Cumberland University in Lebanon, Tennessee. She dropped out to pursue her career in singing, and worked at Starbucks. She played in a blues band for years before moving to Nashville to take her career to the next level. Chloe Kohanski’s parents still live in Tennessee. According to her mother, Aimee Kohanski, “The plan was for her to be an English teacher. We’ve always supported her music, but she didn’t come from a musical family and always wondered ‘am I really good or are you just supportive parents?’ We told her if she quit college she would need to pay her own way and she did, she worked at Starbucks and pounded the pavement.” To see the Miley Cyrus lookalike, just check out Chloe Kohanski’s Instagram account (@chloekohanski).

Kohanski is already making a name for herself in the music industry. She excitedly posted her latest accomplishment on Facebook, saying, “Y’ALL…. I WOKE UP TO NUMBER 13 ON THE ALL OVER ITUNES CHARTS. Please keep sharing my version of Landslide to your friends and family! It’s slowly making its way to the top 10 on the all over ITunes Charts!!! I can’t believe this. Thank you guys so much!!!”
If you want to see Chloe Kohanski’s “Landslide” performance, watch the video below!