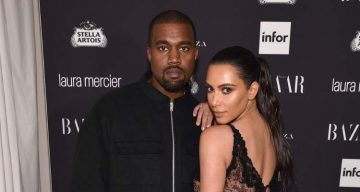 In the latest news, the adult entertainment company, Vivid Entertainment boss would pay $25 million for Kim Kardashian Kanye West sex tape. Steve Hirsch, the 55-year-old founder, and co-chairman of Vivid Entertainment would be happy to fork up a staggering $25 million for a sneak peek into the boudoir of rapper Kanye West and his entrepreneur and socialite wife, Kim Kardashian. If you’re scandalized by this breaking news, you probably shouldn’t be because if memory serves us correctly, the Keeping Up With The Kardashians star shot to fame because of the infamous sex tape with ex-boyfriend singer Ray J and Kim Kardashian. The sex tape that was shot in 2003, but purchased by Vivid Entertainment in 2007, was leaked and quickly became the most famous celebrity sex tape in existence.

Steve Hirsch said that a sex tape featuring the power couple and any of her sisters as well would instantly become a blockbuster. He’s not wrong. From a business perspective, the sex tape with Ray J and Kim Kardashian is still making huge profits for the company, even after a whole decade. Hirsch claimed that the decision to make the tape go public was the best deal ever made in the history of adult entertainment. It has been said that Kim’s ‘momager’ Kris Jenner advised her to film the sex tape. It generated immense publicity and sales for the reality TV star and launched her career into stardom. The sales of the tape are directly co-related to any news and events relating to Kim Kardashian and a brand new sex tape featuring her, and Kanye would be worth $25 million bare minimum.

Furthermore, Hirsch said that a sex tape featuring any of the Kardashian-Jenners would garner a lot of fame, but it would depend on how far the members of the family are willing to push the envelope. The amount he would be open to paying for the tape would depend on what the Kardashian-Jenners would be doing in the video. This comes after rumors that the youngest sister 18-year-old Kylie and her rapper boyfriend Tyga’s sex tape leaked online. So does this mean that a sex tape of Kanye West and Kim Kardashian will be released soon? Keep watching this space for more updates.