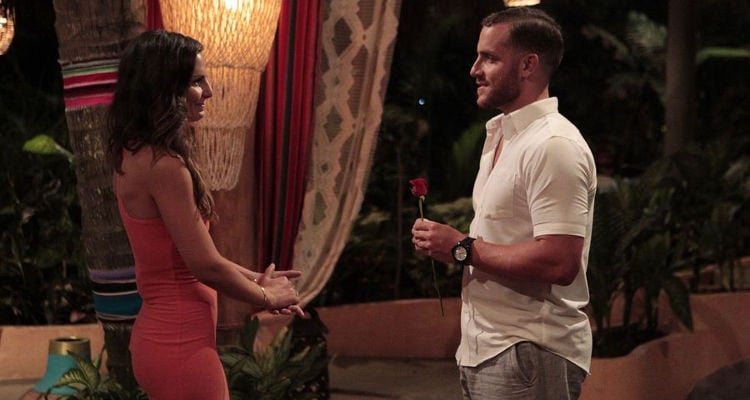 Before we dig into the details about the show, just a heads-up that this article contains Bachelor in Paradise spoilers, so if you wish to catch up on Monday’s episode of BIP then we suggest that you don’t read any further!

So, you want to know what really happened to the couple? Let us go back and start from the beginning. Since day one of meeting each other, both Vinny and Izzy were mesmerized with each other, and especially after their first kiss, the two were inseparable. In fact, they were even known as ‘Vizzy’ on the show. The couple who were head over heels in love with each other but now, with the arrival of a new bachelor, Izzy’s attention has shifted and her feelings have changed. If you have seen the episode or the preview at least, Vinny can be seen saying, “This morning, I thought I would leave paradise with Izzy, but what we had has been ripped apart.”

Each week, the remaining contestants get new surprise guests joining the show, and yesterday Brett Melnick was one of them. He is the reason why Izzy and Vinny broke up. When Izzy saw Brett enter Paradise, her heart skipped a beat, and she immediately started having second thoughts about her relationship with Vinny. Although, they were together since one week, Vinny was quite heartbroken.

Vinny was pretty confident about his relationship with Izzy, however, Izzy started having doubts about her feelings for him. She admitted that the moment she saw Brett, something sparked inside of her, as he is exactly what she envisioned her ideal man to look like. She was immediately interested in getting to know Brett and decided to talk to him first instead of Vinny. She told Brett that he is making her “rethink things.”

She decided to talk to Vinny about the whole situation and she admitted to him that with the arrival of Brett, her feelings dropped from 100% to 75% for him. She did not want to hurt Vinny and felt really bad about putting him through pain. Vinny was heartbroken, as he really saw a future with Izzy. After Izzy’s confession, Vinny could not sleep and discussed the whole situation with the other guys.

To put his mind and heart to ease, he decided to talk to Izzy about it. However, the show ended when both of them in tears and “To Be Continued…” scrolled across the screen. Vinny was heartbroken about the situation and said, “I wasn’t expecting it at all.” He added, “You’re gonna talk to some dude for 10 minutes, and you’re gonna throw everything we have out the window? Because he looks good? With jeans and f–king sandals, rolled up? Get the F–k outta here.”

Izzy gave him the option to get back together after she was done going on a date with Brett. However, Vinny refused the offer and decided to walk out of the show, devastated.

Now that another couple is headed for splitsville, do you think things will work out between Izzy and Brett? What if Brett ditches Izzy for some other girl on the show? What do you think about the whole situation? Let us know your opinion in the comments section below! Also, for the juiciest gossip about Bachelor in Paradise contestants, click here.