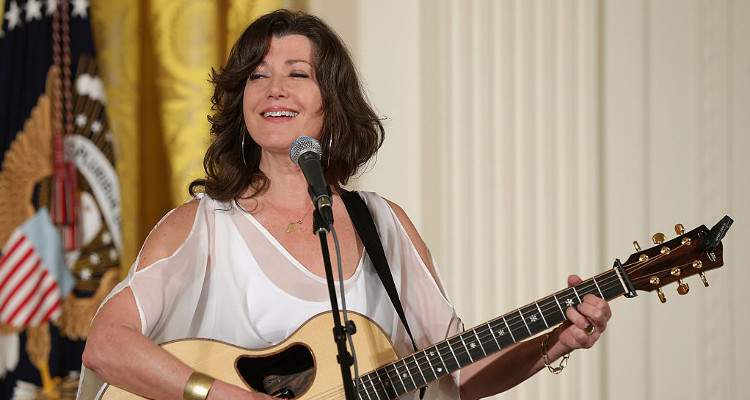 Amy Grant started out as a gospel singer but soon shared her talent across multiple genres. Grant released several albums that spawned numerous chart-topping hit singles. But later in life, she returned to her roots and released several classic albums. Her second marriage to country singer-songwriter Vince Gill has stood the test of time, and she has four children. With a net worth of over $55.0 million, Grant proved without a doubt that talent and faith can overcome any obstacle. Keep reading to know more about this superstar in Amy Grant’s wiki.

Amy Grant was one of the first successful female singers who crossed over from gospel to commercial pop music way back in the late 1980s. She became one of the first contemporary Christian musicians to become a bona fide pop star with the release of albums like Unguarded and Lead Me On.

Grant’s peak came with the release of her blockbuster album, Heart in Motion, which yielded “Baby Baby.” The song topped the Billboard Christian album chart for 32 weeks, and sold five million copies in the U.S. alone.

In 1986, her duet with ex-Chicago lead singer Peter Cetera, “The Next Time I Fall,” became a No. 1 hit. No wonder she was often referred to as “The Queen of Christian Pop!”

A Passion for Gospel Music

Born on November 25, 1960, in Augusta, Georgia, Amy Grant’s age is 57. Grant’s family moved to the Mecca of country music, Nashville, Tennessee, in 1967. So, she was exposed to music from an early age.

Baby, baby / My tender love will flow from / The bluest sky to the deepest ocean #BabyBabyTurns25 #tbt

In 1976, Grant wrote and performed her first song, “Mountain Man,” at Harpeth High School, an all-girls school in Nashville. The song did the rounds in Nashville, and she was offered a recording contract five weeks before her 16th birthday.

Grant released her first album, Amy Grant, in 1977. She went on to release successful Christian music albums like My Father’s Eyes, Never Alone, Age to Age, Straight Ahead, and a couple of Christmas albums.

In late 1980, she studied at Vanderbilt University and met Gary Chapman, her first husband.

Making the Leap to Pop Music

Then, Grant did something that opened doors for other crossover artists like Shania Twain and later Taylor Swift. She widened her fan base and became a successful contemporary pop singer with the release of mainstream albums like Heart in Motion, House of Love, and Behind the Eyes.

Amy Grant’s songs like “Find a Way,” “Stay for Awhile,” “Saved by Love,” “Every Heartbeat,” “That’s What Love is For,” “Good for Me,” “I Will Remember You,” “Lucky One,” and “Takes a Little Time” burnt up the pop charts and established her as a chart-busting pop singer.

Last night warming up backstage at the Franklin Theater..

Also Read:  What is Gwen Stefani’s Net Worth in 2017? Gwen’s “Harajuku Girls” Empire is Unstoppable!

After her divorce in 1999, Grant married country singer-songwriter Vince Gill on March 10, 2000. Amy Grant and Vince Gill have one daughter named Corrina Grant Gill, who was born on March 12, 2001. She also has three children with Gary Chapman.

Today, Grant is known as a singer, songwriter, author, and media personality who is respected wherever she goes. And, thanks to the sale of millions of her albums and singles, live performances, and concert tours, Amy Grant’s net worth is a huge $55.0 million and growing.

Nostalgic… warm…hopeful… loved… not alone. This is what I hope you feel as you listen to this record. #TennesseeChristmas is out now… you can pick it up wherever you buy music! [iTunes link in bio]

Those who want to see some pics of the singer should head over to Amy Grant’s Instagram account, which shows Grant performing on stage, taking care of her children, hanging out with friends, working in the studio, practicing her music, and cooking. There also some great outdoor pictures, tour posters, and quotes.

Although she was once criticized for her non-Christian image and commercial success, Grant took it with a grain of salt, explaining that she never crossed the line in her professional and personal life.

No matter what people say, Amy Grant established a rich legacy and proved that in the end, it’s talent that really matters.