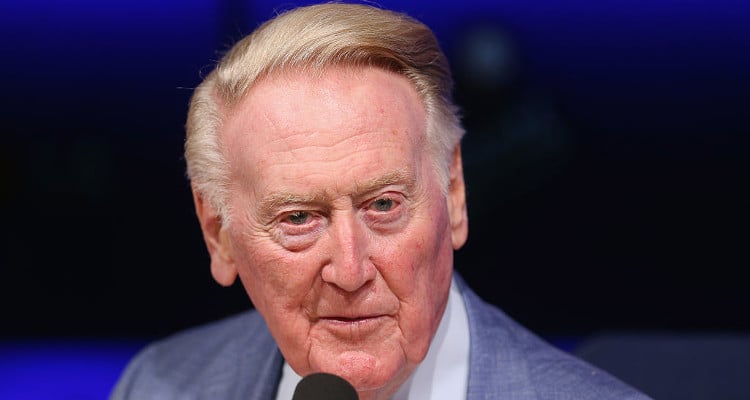 The ESPY Awards 2017 will air tonight at 8:00 p.m. EST on ABC, retired sportscaster Vin Scully will be honored with the Icon Award. If you want to know more about the sportscaster, then take a look at our Vin Scully wiki.

Born Vincent Edward Scully on November 29, 1927, Vin Scully’s age is 89. He was born in The Bronx but grew up in the Washington Heights area of Manhattan. Scully worked several odd jobs delivering beer and mail, pushing clothing racks, and cleaning silver in the basement of a hotel in New York City.

He was born to Vincent Aloysius Scully, a silk salesman and Bridget Scully, a homemaker. When he was four years old, Vin Scully’s father passed away from pneumonia. After his dad’s death, his mother remarried an English merchant sailor named Allan Reeve, who became very close with his stepson.

At a very young age, Scully discovered his love for baseball. He would attend a lot of games and soon became a New York Giants fan. When he was eight years old, Scully decided that he would grow up and become a sports announcer.

Vin Scully’s Net Worth and Salary

After graduating, he got a job offer that led him to work as a college football broadcaster for CBS Radio. In 1950, Scully joined the Brooklyn Dodgers’ radio and TV booths. He followed the team to California, and eventually became the principal announcer for the Dodgers. Scully had become so popular that fans would often carry their radios to the stadium to listen to his commentary.

He also occasionally announced other sports such as tennis and golf for CBS. At the start of the ‘80s, Scully covered baseball for NBC. He was with the network until the late ‘80s when they decided to cut down on baseball coverage. Scully was with Dodgers for 67 seasons, and retired in 2016.

Even though his professional life was doing really well, things were not that great in his married life. Scully married his first wife, Joan Crawford, in 1958. However, in 1972, when Crawford was just 35, she passed away from an accidental medical overdose.

One year after his wife’s death, Scully tied the knot with Sandra Hunt. At the time of their marriage, Hunt had two kids of her own. Later, the couple welcomed their son, Michael to the world. Unfortunately, at the age of 33, Michael lost his life in a helicopter crash, while working for the ARCO Transportation Company. Scully has four children, two stepchildren, 16 grandchildren, and three great-grandchildren. Currently, Scully and Hunt live in Thousand Oaks in California.

President Barack Obama has named Vin Scully as a recipient of the Presidential Medal of Freedom. The Award will be presented at the White House on November 22nd. : : ? by @dominicdisaia

In honor of his Icon Award at the ESPYS, take a look at some of Vin Scully’s most memorable quotes:

“Don’t let the winds blow your dreams away… or steal your faith in God.”

“The roar of the crowd has always been the sweetest music. It’s intoxicating.”

“To be honest, I’ve never been interested in how many games I’ve done and seen. It doesn’t mean anything to anybody. All I know is I’m eternally grateful for having been allowed to work so many games.”

“I try to call the play as quickly as I possibly can and then shut up and let the crowd roar because, to me, the crowd is the most wonderful thing in the whole world when it’s making noise.”

“I really love baseball. The guys and the game, and I love the challenge of describing things. The only thing I hate – and I know you have to be realistic and pay the bills in this life – is the loneliness on the road.”