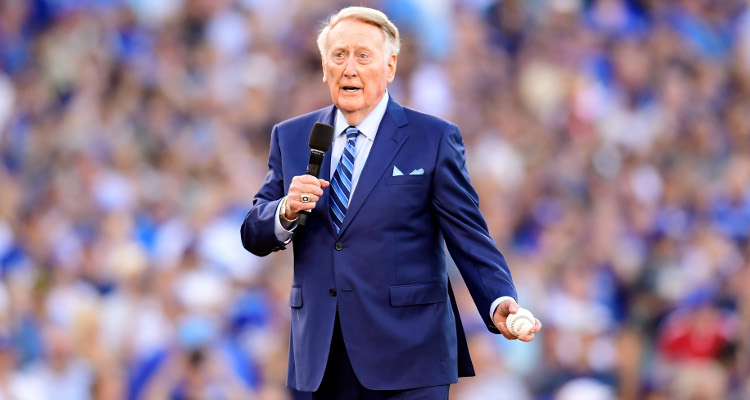 Vin Scully is irreplaceable to the Dodgers, which is why he was missed when he retired at the end of last season. But the sportscaster made a glorious return to the diamond, “throwing” the first pitch for the L.A. Dodgers World Series game —with the help of some notable faces!

Leave it to Vin Scully to make the World Series at Dodger Stadium magical! The beloved sportscaster came out of retirement to “throw” the first pitch with the help adored veteran Dodgers pitcher, Fernando Valenzuela and veteran Dodgers catcher, Steve Yeager catching. It was a beautifully nostalgic moment to see all three of those veterans back on the field, and fans absolutely loved it! Scully won’t be returning to the broadcasting booth, but the stadium thundered with applause by welcoming fans. Learn all out about this much-loved sportscaster, right here in our Vin Scully wiki.

Vincent Edward Scully was born in The Bronx to Vincent Aloysius, a silk salesman, and Bridget, a homemaker. He was raised in Washington Heights in Manhattan.

His father died of pneumonia when Scully was just four years old. His mother later remarried Allan Reeve, an English merchant sailor. Scully grew up with Reeve as his father figure referring to him as “my dad.”

Growing up, Scully worked delivering beer and mail, pushing garment racks, and cleaning silver in the basement of the Pennsylvania Hotel in NYC.

Scully was a young boy of eight when he discovered his love for baseball. He saw the results of the 1936 World Series at a laundromat when the New York Giants lost to the New York Yankees. He felt a pang of sympathy for the losing team since he lived near the Polo Grounds and was into extracurricular activities. He attended many games for free and became a Giants fan.

#2. The Start of an Illustrious Career

After serving in the U.S. Navy for two years, Scully started his career as a student broadcaster at Fordham University, where he studied English. He had a lot on his plate during his university days.

Scully worked at an FM radio station, was an assistant sports editor at The Fordham Ram, sang in a barbershop quartet, played center field for the university baseball team, and did radio broadcasts for all the games.

In Fordham, Scully played against the former president, George H.W. Bush. Bush was a first baseman at Yale.

At the same time, he was studying and mailing 150 letters to stations looking for a job. Only the CBS Radio affiliate in Washington D.C. responded with an offer.

Scully was recruited by Red Barber, the sports director of the CBS Radio Network, to cover college football news. One of his broadcasts during a freezing football game from the stadium roof without a press box or warm clothes impressed so much, Barber took him under his wing.

Scully joined Barber in the broadcasting booth of the Brooklyn Dodgers in 1950. When Barber left, Scully filled in for him at the 1953 World Series. At 25, he was the youngest person to broadcast a World Series game.

With Barber’s departure, he became the principle Dodgers broadcaster, even moving with the team to L.A. He also turned down a better offer from the Yankees to stay with the Dodgers where he became so popular, fans voted him the “most memorable personality” in the franchise’s history.

Even as his baseball career rose, he never let go of football. He did NFL broadcasts for CBS Sports with different analysts. He also covered the PGA Tour, but his network commitments caused his Dodgers schedule to suffer. After a long dispute, he left CBS for NBC, where he covered baseball and golf.

After his contract ended, he focused on his work with the Dodgers, but his declining health caused him to miss a few commitments. Last year, he announced he would be retiring at the end of the 2016 season. It marked the end of an era for Dodgers fans who didn’t want to see him go.

Soon after his retirement, the Dodgers advanced to the World Series for the first time in 29 years. Franchise fans petitioned for Scully to come out of retirement for the game, but he refused. He did, however, throw the first pitch last night with Steve Yeager and Fernando Valenzuela.

Scully’s career began four years before the transistor radio was invented and baseball fans would carry them to listen to his play-by-plays. At the time of his retirement, he earned $800,000 annually, bringing the 89-year-old’s net worth to an estimated $5.0 million.

#4. His Wife Supported Him

Outside the diamond, Scully went through personal tragedies. He was first married to Joan Crawford, but their marriage came to a tragic end after 15 years. Crawford was 35 when she passed away of an accidental medication overdose.

In 1973, he married Sandra “Sandi” Hunt and has a son with her. Hunt had two children from a previous relationship.

Scully is a father to four children and two stepchildren, and a doting granddad to several grandchildren. But his eldest son, Michael, passed away in a tragic helicopter crash at the age of 33. Scully credits his faith and job in helping him deal with the grief of losing his son.

His wife has been his biggest supporter through his career. He considered retiring a few seasons earlier, but she encouraged him to keep working all the way to his 67th season.

Hunt was a stay-at-home mom who worked as a chairwoman for the charity, Share Inc., which helps abused and developmentally disabled children. Although she kept a low-profile, Scully often spoke about her in the media.

As part of the Dodger Stadium farewells, Sandi Hunt escorted Vin Scully onto the field. And to thank her for all she does for him, he serenaded her with “Wind Beneath My Wings” in front of the entire stadium.