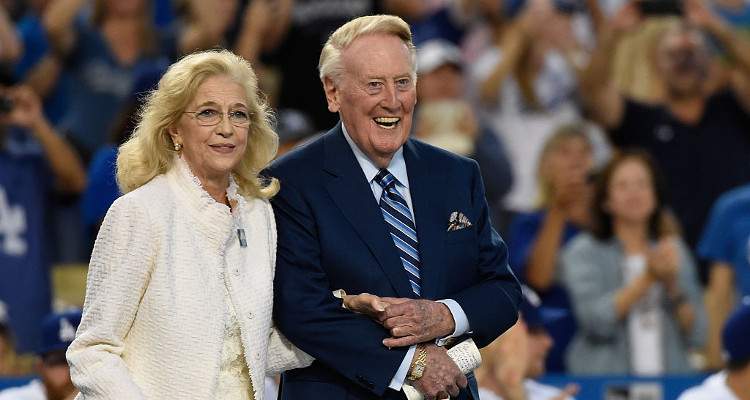 Vin Scully was the announcer for the Los Angeles Dodgers and has been a fan favorite for more than six decades before he retired. If you are wondering who Vin Scully’s wife is, then keep reading for all the details from Sandra Hunt’s wiki.

Sandra Hunt is Vin Scully’s wife, and she is more than excited about the World Series. The Los Angeles Dodgers won Game 1, and there nobody is more excited about it than Vin Scully. The loving sports announcer has been associated with the Dodgers for a long time, and there is something more to look forward to after their first win.

Sandra Jean Hunt Schaefer was a single mother when she met Vin Scully back in the ‘70s. She had two kids, Todd and Kelly, from a previous marriage.

Vin Scully was previously married to Joan Crawford (not the actress), and the two had three children. And after 14 years of marriage, Crawford died of an accidental medication overdose.

Sandra Hunt Is a Proud Wife

Scully was honored with his very own avenue last year, and his wife could not have been more proud. The two held the street sign up to make the official announcement.

He was a Dodgers broadcaster and announcer since the team was called the Brooklyn Dodgers, and has been associated with the baseball team for over 60 years, so the recognition was well-deserved.

Scully suffered a lot of loss in his life. After the passing of his first wife, he also lost his eldest son, Michael Scully, in a helicopter crash after his marriage to Hunt.

Sandra Hunt has been there for Vin Scully through good and bad. And, many have so much respect for her today.