Beyonce wore a pearl-laden, off-white dress with a plunging neckline to the CMA Awards 2016 ceremony in Nashville, and the diva looked as stunning as always! She teamed up with the Dixie Chicks and gave a mind-blowing performance of her song, “Daddy Lessons.” She brought the house down with her spectacular dress and fantastic live performance.

Everybody knows that Beyonce is a show stopper wherever she goes. However, Beyonce outdid herself at the CMA Awards show in Nashville, on Wednesday, November 2, 2016. Beyonce’s CMA outfit was over the top, but she pulled it off, just like she always does! When Beyonce took the stage along with country music super group, The Dixie Chicks, everybody at the venue was just gaping at her. Beyonce didn’t miss a beat as she gave a sterling performance on stage. The only person at the venue who looked unhappy with Beyonce was country singer Kenny Chesney, leading many to wonder, what’s going on with Kenny Chesney and Beyonce? It was evident as the camera panned to Chesney that he was not digging her performance. Than again, many die-hard country fans were up in arms about the fact that Beyonce was even performing at the Country Music Awards! Others thought she was a welcome addition to the CMA stage. Beyonce’s CMA performance was lively, fun, and many felt it was one of the best live performances of the evening.

Beyonce’s CMA dress was a floor length, curve-hugging sequined dress, with the most plunging of necklines! She was covered in pearls and the tight dress showed off her fantastic figure. Beyonce showed off her assets, as the low cut dress combined classy and sexy in the best way possible. However, Kenny Chesney’s facial expressions during her performance looked like he would have rather been anywhere else in the world! Either he wasn’t impressed with her performance, or he has a serious case of RBF (resting b**tch face). The look of disapproval he had as he watched Beyonce perform her song with the Dixie Chicks was palpable, and like a bad car accident, you just couldn’t look away! 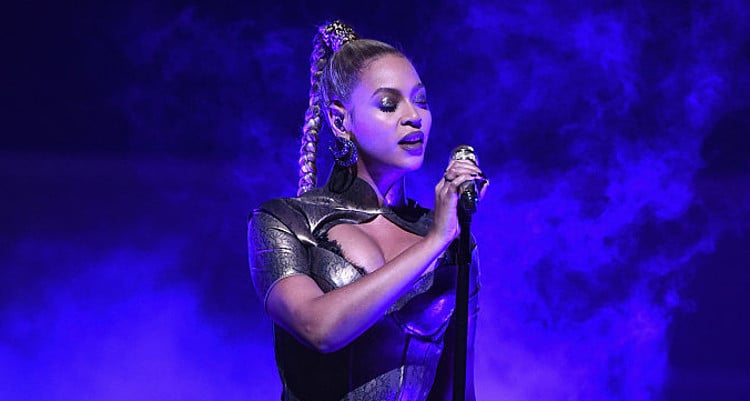 Beyonce’s performance was nothing less than stunning. She absolutely killed her performance with the Dixie Chicks, as they jointly performed a version of Beyonce’s song, “Daddy Lessons.” Beyonce and the Dixie Chicks’ CMA performance was one of the highlights of the night. Two acts from two widely different genres sung in tandem, as if they have been doing this all their careers. They complemented each other and the final result was innovative and evocative. “Daddy Lessons” had the entire audience on their feet, as most clapped and encouraged the two acts on stage. With a bunch of supporting musicians, the performance was both an audio and visual treat.

It was Beyonce’s dress that got a lot of attention at the ceremony. He hair was straight and sleek and her off-white dress was in contrast to the severe black dresses that the Dixie Chicks wore. The contrast looked amazing, and there is no doubt that the dress was one of the most discussed topics of the evening. Way to go, Beyonce!

If you want to check out Beyonce’s killer outfit and her fantastic performance at the CMAs, just click below!