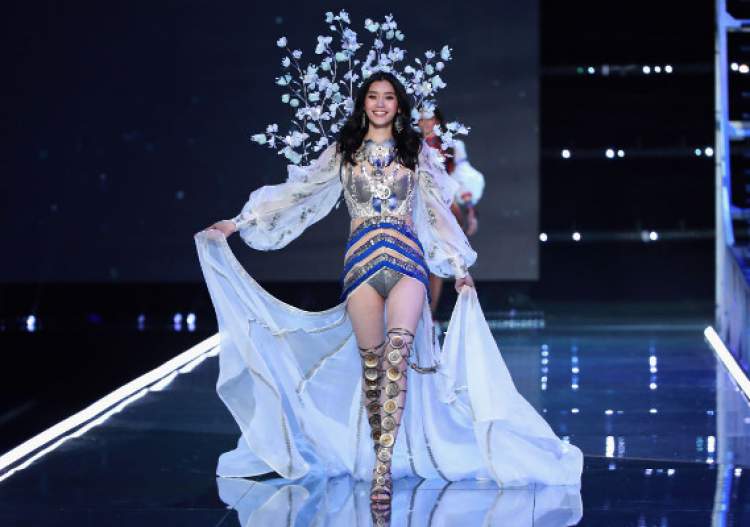 The most awaited Victoria’s Secret Fashion Show aired on November 28, 2017, in Shanghai, China at the Mercedes-Benz Arena. A lot of things go on during the fashion show and there are a lot of rehearsals that Victoria’s Secret models go through before the big show. But there are things that happen during a live show that are unpredictable and unplanned, like when a model loses her balance and falls straight on the ramp. One of the Victoria’s Secret models fell on the runway and this is currently the talk of the town. If you want to know more about Ming Xi’s fall, then we have the scoop for you right here.

Imagine you are walking on the sidewalk and there are a lot of people around you. Suddenly, you lose your balance and fall straight on your face! Naturally, somebody would come to your rescue and help you get up, but it can be a little mortifying for you. Now, imagine this scenario as a model, who is walking in front of a huge crowd; the fall would perhaps be your worst nightmare! This is what happened for Victoria’s Secret’s, Ming Xi!

Ming Xi’s Fall on the Runway

Struggles are required in order to survive in life because in order to stand up you got to know what falling down is like #bebeautiful ? • • • #styledlady4ever #mua #torontomakeupartist #life #l4l #livelovebeauty #fashionstylist #fashion #fblogger #bblogger #bbloggersca #theeverygirl #beauty #boss #inspiration #quotes #womensupportingwomen #vsfashionshow #mingxi #strength #lifehappens #keepgoing #reallife #human

Ming Xi’s age is 28 years old, and she was born in Shanghai, China on March 8, 1989. As a model in the Victoria’s Secret Fashion Show, all eyes were on her when she walked the ramp. Ming Xi has been a part of the show four other times before, but, unfortunately, the 28-year-old fell on her knees when the show was in her hometown last night! Looking at the video, it seems like the Chinese model fell when she got caught up in her flowing, sheer ensemble.

Despite the fact, that she fell in front of millions of viewers, she handled the situation gracefully. Although it was a mortifying moment for Xi, she didn’t let it show on her face and smiled through the whole ordeal, all the time balancing her beautiful headgear and trying to get up to continue her walk. In fact, Xi seems to be such a sport that she wasn’t even scared to laugh at herself! She adjusted her hair and got up to complete her walk, with a helping hand from a fellow model. The audience and Xi’s fellow models applauded her, and she finished her walk gracefully.

A Fellow Model to the Rescue

QOTD: What do you guys think about #gizeleoliveira helping #mingxi when she fell? AOTD: I thought Gizele was such a professional, I absolutely loved how she stopped to help Ming get up and waited until she was finished posing, absolutely amazing! ❤️ -Vana ? #vsfs2017 #gizeleoliveira #mingxi #victoriassecret #vs

A post shared by ❥Victoria's Secret Confessions (@victoriasecret.confessionss) on Nov 27, 2017 at 5:44pm PST

Ming Xi looked absolutely stunning in a blue lingerie look, which was complete with floral wings and silver medallions. When Ming Xi fell on the ramp, fellow model Gizele Oliveira helped her to steady and balance herself, so that she could walk it out and pose at the end of the runway. This act undoubtedly proves that VS models are there for each other through thick and thin.

The Aftermath of the Fall

As many of you may already know, I fell during my 5th year walking at the Victoria's Secret show yesterday. It was no doubt one of the hardest moments I have ever had to go through in my career, especially since the show was taking place in my hometown, in front of my mother's and my people's eyes. However, the support I received from everyone yesterday was incredible and I am truly grateful to everyone who was there for me. @ed_razek Thank you for your supportive words and your continuous support throughout these 7 years. @giizeleoliveira Thank you for helping me up after the fall, it was a very selfless and loving act from you. Thank you to all the girls who rushed to comfort me at backstage after what had happened, you are all family to me. Lastly thank you to everyone who sent and left me supportive messages. I will pick myself up from where I fell, and I will keep going in order to repay all the support you all have given me!! ❤️️#vsfashionshow @victoriassecret

Although Ming Xi showed no signs of embarrassment on the ramp, the 28-year-old model was all tears backstage. According to sources, “Ming was really upset when she fell on the runway. It was a hard fall. She got up as gracefully as she could. She was shaken up after that fall. All the models made her feel better after though. She is OK now.”

Later on, Ming Xi took to Instagram to talk about the incident; she wrote, “As many of you may already know, I fell during my 5th year walking at the Victoria’s Secret show yesterday. It was no doubt one of the hardest moments I have ever had to go through in my career, especially since the show was taking place in my hometown, in front of my mother’s and my people’s eyes. However, the support I received from everyone yesterday was incredible and I am truly grateful to everyone who was there for me.”

She also thanked her fellow Victoria’s Secret models who helped her up and let her walk it out. Ming Xi continued in the post, “@giizeleoliveira Thank you for helping me up after the fall, it was a very selfless and loving act from you. Thank you to all the girls who rushed to comfort me at backstage after what had happened, you are all family to me.”

If you want to watch the moment when Ming Xi fell but concluded her catwalk in the end, check out the video below. Also, let us know your opinion about the incident in the comments section!