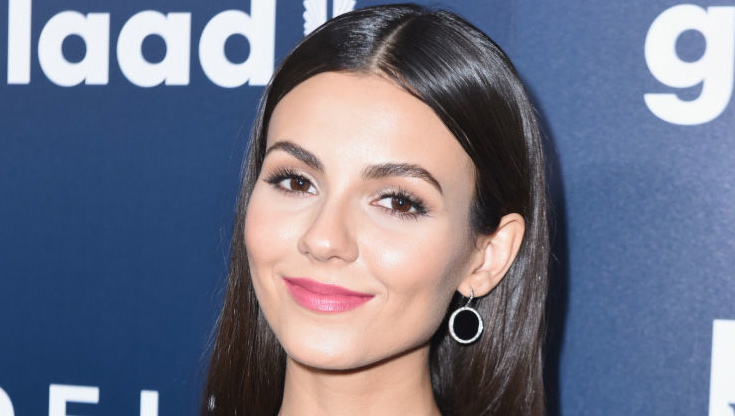 Victoria Justice’s age is only 24, but she has been a working in Hollywood since she was a child! Now, she’s suddenly all grown up and starring in a new comedy flick! Her new film, The Outcasts, hits theatres tomorrow (April 14) and we thought it would be the perfect time for you to learn all you need to know about the actress. So, check out our Victoria Justice wiki, right here.

Victoria Dawn Justice was born on February 19, 1993 in Hollywood, Florida to Serene and Zack Justice. Victoria Justice’s sister is actually her half-sister, Madison Grace Reed. Victoria’s father is of German, English and Irish descent and her mother is of Puerto Rican descent. The family moved from Hollywood, Florida to Hollywood, California when she was a child. It seems either way, Victoria was meant for Hollywood no matter where she was.

Justice first came onto our screens full-time when she co-starred on Zoey 101, but she has also made appearances on hit shows like The Suite Life of Zack and Cody and iCarly. Her movies include The Penguins of Madagascar, Bye Candy and The Outcasts, which will be released on April 14.

Her most notable follow-up role after Zoey 101, was when she starred in the musical show, Victorious, alongside pop singer, Ariana Grande. Victoria Justice’s songs would often appear on the show mostly, but it was Grande who broke out into the music industry first. But don’t right off Justice just yet—she’s a talented singer and actress but not everyone is meant to do everything at once. Still, Justice’s net worth of $8.0 million is something to be proud of, especially since many actors don’t have that despite being in the business for decades.

Been with this one since '96! Wouldn't have it any other way. Love you @themadgrace #NationalSiblingDay ?

Several of Hollywood’s past and present couples met and fell in love while filming, so we’re not surprised the same happened for Justice. She met her boyfriend, actor and songwriter, Reeve Carney, 33, when they were filming The Rocky Horror Picture Show. Back in 2016, an insider told E! News that, “They’ve been together for a couple months now and aren’t going out of their way to hide it but just don’t go out together in public a ton.”

The couple were spotted at an event in February in West Hollywood and have mentions of each other on the official Victoria Justice Instagram account.

She’s a Supporter of the LGBT

While at a GLAAD event, Justice spoke with Fox News about how much the LGBT community means to her.

“To me being able to support people so they can be their most authentic self and their true selves is so important, and I feel like they should always be supportive of that,” she explained. “I have so many gay friends and I grew up with the gay community so it’s just something very near and dear to my heart.”

I feel honored to have been invited to present and support @GLAAD at their Rising Stars luncheon yesterday. It was so inspiring to see young LGBTQ advocates recognized for their dedication to equal rights. I'm hopeful for the future and will continue to support the rights of the LGBTQ community. #?️‍??????

Millennials don’t have the best reputation (rolls eyes), but Justice isn’t in that category. She takes her job seriously and still manages to have fun.

“I think working on ‘Victorious’ really taught me a lot of things,” she said in a Fox News interview. “I was working really hard at a young age, at 16 years old. I was in 80 percent of the scenes, I would say. I would record on the weekends. I would learn choreography and rehearse during the week and [do] press. It was a non-stop thing. I think I developed a really great work ethic at a young age and that’s something I will always carry with me.”

Her Mother Kept Her Humbled

With so many cases of celebrities going wild, Justice was lucky enough to have a strong family unit that kept her humble and grounded, even while under the spotlight.

“I used to say when I was younger my mom would ground me a lot so that’s probably how [I stayed grounded],” she said.

Don’t forget to watch her latest teen-comedy flick, The Outcasts, which hits theatres on Friday April 14!