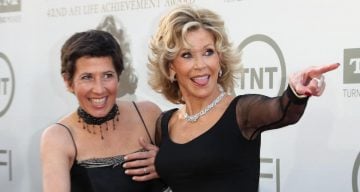 Vanessa Vadim comes from movie royalty, being the daughter of legendary Hollywood actress Jane Fonda and French filmmaker Roger Vadim. She is a documentary filmmaker and an eco-advice columnist for several websites, an interest she has inherited from her mother. Vadim is married to Paul Van Waggoner and has two children from two different men from her past. Vadim has struggled hard to escape her famous mother’s long shadow and has succeeded in a big way.

Even though Jane Fonda is 80 years old, her fans can’t seem to get enough of her. Scores of people still think about this legendary Hollywood actress and wonder how she has accomplished so much throughout her longstanding film career. With age, Jane Fonda has only become more loved, more enigmatic, and more alluring for both her fans and Hollywood watchers.

A New Documentary on Jane Fonda

Now, there is a new documentary on Fonda called Jane Fonda in Five Acts that details her professional and personal life. It also follows her social activism that made her a controversial but much-loved figure in Hollywood. The documentary, which is directed and produced by Susan Lacy, shows the viewers exactly why Jane Fonda is considered an icon even today.

Since the news of the documentary, people have become curious to know more about Jane Fonda’s daughter, Vanessa Vadim. Vanessa Vadim was born to Fonda from her marriage to the French film director Roger Vadim and was named after the actress and activist Vanessa Redgrave. Here are a few details from Vanessa Vadim’s wiki.

Her Family Is Famous

Born on September 28, 1968, in Paris, France, to Jane Fonda and Roger Vadim, Vanessa Vadim’s age is 50. She has a half-brother named Troy Garity, and her cousins are Bridget Fonda and Justin Fonda. She has three siblings from her father’s side, namely Nathalie Vadim, Christian Vadim, and Vania Plemiannikov.

Who Is Vanessa Vadim Married To?

Vanessa Vadim has been married to Paul Van Waggoner since June 12, 2010. She has two children of her own from two different men; a son Malcolm, born in 1999, and a daughter Viva, born in November 2002. Vanessa Vadim’s wedding to Waggoner was a “simple, lovely and spiritual” ceremony and was held in St. Tropez, France. Vadim was previously married to Mark Arnett, a producer known for The Quilts of Gee’s Bend and Do Not Go Gently.

Currently, Vadim is an ecological advice columnist for the “Mother Nature Network” website. After completing her high school studies, Vadim studied at Brown University in Providence, Rhode Island, where she completed her graduation.

Given that both her parents worked in the film industry, it was no surprise that Vadim chose a career in the arts. Vadim has dabbled in documentary making as well, and to date she has worked on two of them. She worked as a crew member on Blue is Beautiful in 1999 and as a director, producer, editor, and cinematographer on The Quilts of Gee’s Bend in 2002.

She also writes as an eco-advice columnist for the website TheDailyBeast. Vadim’s love and concern for nature and environmental issues have come from her mother Jane Fonda, who has fought many a battle for the protection of our environment in her time.

She Has Had Her Troubled Days

Vadim hasn’t always been such a prim and settled person in her life. In fact, in her early 20s, she was quite a wild child! When she was 21 years old, she was arrested in October 1989 in New York City on charges of obstructing government administration and wandering around for the purpose of purchasing drugs and creating disorderly conduct.

Vadim Is a Gifted Individual in Her Own Right

While Vadim’s maternal family is quite famous, she herself prefers to stay away from the limelight. She keeps a low profile and stays busy with her work and family. It is tough to escape the shadow of her famous mother, but Vanessa Vadim has been able to carve out a place for herself by her own efforts. And we commend her for it!