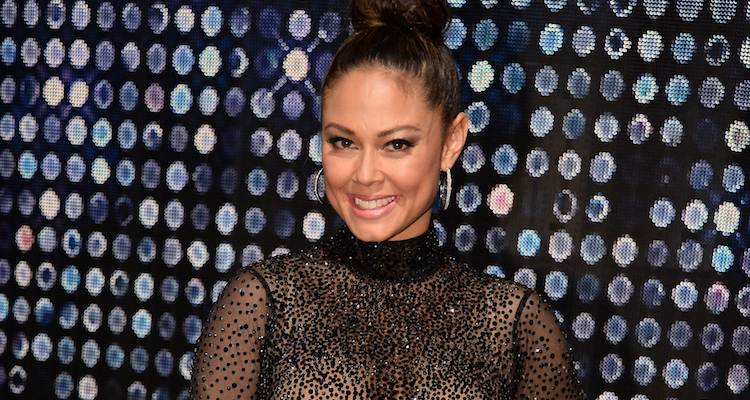 Is Vanessa Lachey pregnant with her fourth child? The Dancing with the Stars contestant has been enjoying herself so far, and a funny new nickname has led people to wonder if another Nick and Vanessa Lachey baby is on the way. Here’s the scoop.

Vanessa Lachey was having a great time on Dancing with the Stars, putting her mommy duties to the side and focusing on having some fun for herself. That was until she suffered a toe injury that dampened her spirits. On Friday in the rehearsal room, Lachey shed some tears as pro partner Maksim Chmerkovskiy bandaged her toe. “That’s going to be so painful,” he said right after it happened. “That hurts my soul.” The pair were in the midst of a stressful start to the season as this week, as the couples must perform two dances: one this past Monday night, and the other on Tuesday (tonight).

Mama tryin to get her groove back… and it feels so good! Last we we did the Cha Cha! I had sooo much FUN! This week is the FoxTrot! I hope you Love it and VOTE! @dancingabc @maksimc #TeamBabiesAndBallroom #DWTS

But is Vanessa Lachey pregnant again? That’s what many are asking after host Bruno Tonioli labeled her a “yummy mummy with a sexy carriage,” after her incredible cha-cha with Chmerkovskiy. “Dance is fun and that’s what I came here to do. And I’m prepared physically and mentally because I have the best coach,” she said.  “I think we’ve set a bar and now we have to keep that bar.” She’s been happy to take a break from the kids and do something for herself. “Mama’s getting her groove back,” she exclaimed during a rehearsal. Nick and Vanessa Lachey have three adorable children: Phoenix Robert, Brooklyn Elisabeth, and Camden John, and maybe the 2017 Vanessa Lachey pregnant rumors are just a way for fans to say they want more!

#tbt Last weekend celebrating our big boy turning 5! He wanted a racing theme so we went ALL out! He's earned it! Sweet, smart, funny and sooooooo Loving! We Love you Camden John! ??❤️?#LacheyRacing I need to blog soon about this party! It was so much fun!

She did post a funny video of her and her coach dancing to “Despacito,” while she rubbed her tummy. The photo was captioned: “FINALLY! A team name! #TeamBabiesAndBallroom! We have babies AND we dance! DONE! Love it! Hope you do, too! Man, @maksimc has got some MOVES! And no, I’m not preggo, haha!… just lots of belly love for my three babies! #DWTS premieres Monday Sept 18th! LIVE!”

Vanessa Lachey on Dancing with the Stars

Hubby Nick Lachey was proud of his wife as she strutted her stuff at the competition. “I thought mama killed it,” he said. “She rocked the whole thing.” Vanessa also raved about her husband’s performance, as the two are competing against each other this season. “You guys are amazing! And I get to come home with that tonight,” she said. Even though the couple are excited to get time away from their parenting duties and have some fun, they are still striving to portray a good example to their kids. Nick said that although dancing makes him feel more uncomfortable than anything else in life, he thinks about what he says to his five-year-old about, “not being afraid to try new things.” He joked about people assuming he could dance because he was in a boy band, but added that 98 Degrees was not a group of dancers by any means.

#TeamBabiesAndBallroom…And BigToe? ? Let's do this Monday Night!!! #Repost @maksimc ・・・ WARNING ⚠️ This video might give y’all the idea that @vanessalachey is one tough chick! I guess after childbirth what’s a little piece of meat and half of toe nail hanging out of off the tip of your big toe while you’re running out of time trying to prepare two dances for Monday and Tuesday on @dancingabc ? [She put on her shoes five minutes later and we kept running the dance ? ] #teamWhoNeedsBigToesToDanceAnyway #MyPartnerIsTougherThanYours #teamBabiesAndBallroom