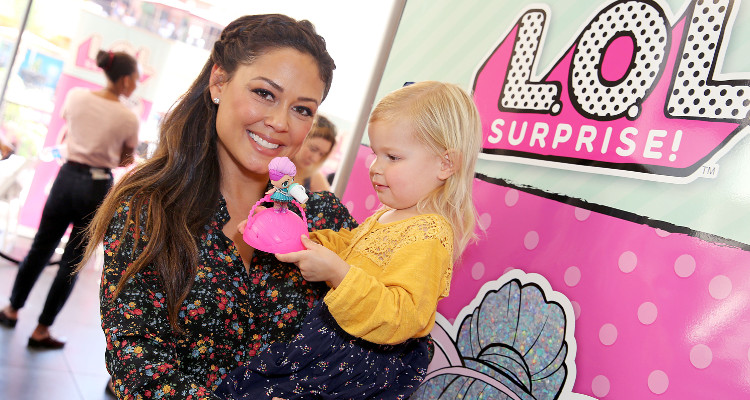 Dancing with the Stars got emotional last night (October 9) with the Most Memorable Year week. Vanessa Lachey’s most memorable year was very recent because it was when her and Nick Lachey’s youngest child was born.

The celebs brought their best to the ballroom last night on Dancing with the Stars along with a few tearjerking moments. The Most Memorable Year night saw Vanessa Lachey back at the top of the leaderboard with her graceful and emotive rumba with Maks Chmerkovskiy. Her most memorable year was the year her youngest child, Phoenix was born. Phoenix Lachey’s premature birth was a difficult time for his parents to go through. Here’s what you need to know about Vanessa Lachey’s kids and her difficult childbirth.

The then Vanessa Minnillo, fresh from her breakup with her MLB boyfriend Derek Jeter, and Nick Lachey, who divorced Jessica Simpson, began dating in 2006 after she appeared on his music video for “What’s Left of Me.” They briefly broke up but rekindled their romance before they got engaged in 2010.

They tied the knot in a super romantic wedding ceremony at Richard Branson’s private island where they often vacationed together. The following year, they welcomed their first child together. Camden John Lachey was born in September 2012 to an overjoyed Nick and Vanessa.

Nick shared how they found out they were expecting on Live! With Kelly at the time. Vanessa was in New York, having wrapped up her appearance on Live!. “Later that night, she started to feel a little different, not quite herself, so she went to the store, got a pregnancy test and it came back positive,” said Nick “So we’re having a baby!”

Camden had the honor of having an entire album dedicated to him by his father. Nick released A Father’s Lullaby with songs composed for his son and even featured little Camden on the album cover.

#tbt Last weekend celebrating our big boy turning 5! He wanted a racing theme so we went ALL out! He's earned it! Sweet, smart, funny and sooooooo Loving! We Love you Camden John! ??❤️?#LacheyRacing I need to blog soon about this party! It was so much fun!

Vanessa and Nick’s second child and only daughter, Brooklyn, was born in January 2015 and Nick was wrapped around his little girl’s finger. Right from her birth, her parents noted that Brooklyn is a firecracker compared to the somewhat reserved Camden.

As for her name, Nick let us in on a secret. “Well, if you must know, she was conceived in New York,” he said adding, “Not in Brooklyn, per se, but we felt the Upper West Side didn’t have a good ring to it and we wanted to pay an homage to New York.”

Sometimes it's more FUN to bring the donut shop to US! Mornings in jammies, on the counter, with donuts & The Original Donut Shop Coffee pods is one of our favorite things! Lots of messes but even more laughs!!! #HaveMoreFun @keurig #sponsor ??❤️

The happy couple welcomed their youngest son, Phoenix on Christmas Eve 2016. The MTV host shared the news on her Instagram with the caption, “It’s a very Merry Christmas indeed! We had our Christmas Miracle. Phoenix Robert Lachey decided to show up early and was born on Christmas Eve. Mommy, Daddy, Camden & Brooklyn LOVE You very much!”

Vanessa and Nick then shared their terrifying experience about Phoenix’s birth. While Camden and Brooklyn were carried to full term and born healthy, Phoenix’s birth wasn’t as smooth. He was born 10 weeks early through a C-section on December 24 though his due date was sometime in the spring of 2017.

“I was in the hospital on bedrest and then my water broke. I was only 29 weeks,” Vanessa told her partner, Maks, whose wife Peta Murgatroyd is Nick’s partner, and had a similar ordeal when their son, Shai had to be rushed to the emergency room shortly after he was born.

Nick and Vanessa broke down in tears sharing their experience with clips of Phoenix in the hospital. At that time, Nick’s song “Godspeed (Sweet Dreams)” helped them “through some really tough times and helped us bond even closer as a family.” For her emotional rumba, the judges gave them a 24/30 which tied her with the other top-scorers of the night.

Watch Vanessa and Maks’ moving dance below, and don’t miss Dancing with the Stars Monday nights at 8:00 p.m. EST on ABC.