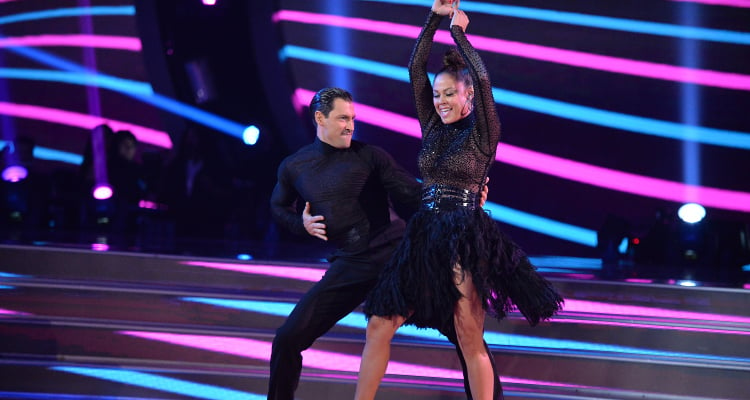 Vanessa Lachey and Maksim Chmerkovskiy gave a brilliant performance last Monday on Dancing with the Stars and earned one of the highest scores of week one. A toe injury Lachey suffered during rehearsals on Friday may cause problems for the couple, as there will be two performances this week. But both are fighters and cannot be ruled out just yet!

It was nothing short of a tragedy for Vanessa Lachey and Maksim Chmerkovskiy, when the former Miss Teen USA injured her toe during rehearsal on Friday, September 22, 2017. In the video of their practice, Lachey is seen wincing, and holding back tears while holding her bleeding toe as Chmerkovskiy wrapped it up. Just seeing his partner in pain had Chmerkovskiy saying, “That is going to be so painful. That hurts my soul.” As Dancing with the Stars will air both Monday and Tuesday night this week, this injury could not come at a worse time for the two. There are a lot of expectations from the pair after Vanessa Lachey and Maksim Chmerkovskiy’s performance last week got them in the top three.

Scoring Better than Her Husband

On Monday, September 18, 2017, Vanessa Lachey and Maksim Chmerkovskiy hit the stage with total enthusiasm to give their first performance of the season. And what a performance it was! The 36-year-old performed the cha-cha with Chmerkovskiy, and they were scored 21 points out of 30. She beat husband Nick Lachey’s score of 18 with his partner, Peta Murgatroyd, Chmerkovskiy’s wife. Though she has bragging rights around the house, Vanessa Lachey still has two other couples in the Dancing with the Stars cast ahead of her. Rather than have a full week of practice between performances, each couple will take the stage twice this week as Dancing with the Stars airs on Monday, September 25, and Tuesday, September 26.

This look wasn't planned, but I caught my reflection and got extra inspired! Today I embark on a crazy journey. Yes it's glitz and glam, but this is also the most vulnerable I have EVER been in my life. Both physically and emotionally I am putting myself out there. I am inspired everyday by strong women and I am grateful to have every opportunity I've been given! I will never take them for granted. Tonight is for US ladies! We each have our individual journey and story and we continue to find ways to make it happen. Be good to YOU! YOU are BEAUTIFUL! #LetsDoThis #TeamBabiesAndBallroom #RosieTheRiveter #DWTS ??❤️??

At the moment, it is not clear whether Lachey and Chmerkovskiy will perform this week, as no statement has been made. Their first performance to “Woman” by Kesha featuring The Dap-Kings Horns, was nothing short of excellent. If they can keep going strong, they are definitely contenders to win this season’s Mirrorball Trophy. Even the judges were impressed with the couple’s first performance, with Bruno Tonioli calling Lachey a “yummy mummy” afterward.

It's true… there's another man in my life! And he's helpin' Mama get her groove back! Dancing With The Stars Season 25 premieres Sept 18th on ABC @maksimc @dancingabc

Lachey herself was thrilled by her performance and told People, “Dance is fun and that’s what I came here to do. And I’m prepared physically and mentally because I have the best coach. I think we’ve set a bar and now we have to keep that bar.” With this kind of confidence and quality performance, it is no surprise that Lachey and Chmerkovskiy are one of the favorites to win this season. The other contestants better watch out as Vanessa Lachey and Maksim Chmerkovskiy are here to win Dancing with the Stars season 25!