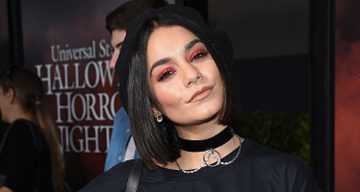 It looks like High School Musical star, Vanessa Hudgens and her gorgeous boyfriend, Austin Butler are still together giving fans everywhere serious relationship goals! Hudgens is known for keeping quiet when it comes to her relationships, and though she has not been linked to too many men, she definitely has good taste. As they say: Quality over quantity! Learn more about her boyfriends as we bring you Vanessa Hudgens’ dating timeline.

If you are wondering who Vanessa Hudges is dating in 2017, then you came to the right place! Fans are loving Vanessa and Austin Butler together and we could not agree more. Though the two remain somewhat quiet on their relationship with each other, fans love seeing these two together! The two simply slay on any red carpet, and though they had to do the long-distance thing earlier this year, they are inseparable when they’re together. But how does he compare to her past boyfriends? Take a look at Vanessa Hudgens’ dating timeline and see for yourself!

A controversial nude photo of the actress leaked a couple years after it was allegedly sent to Nickelodeon star, Drake Bell by a pre-Disney Vanessa Hudgens. She immediately spoke out about the issue in 2007, saying that she regrets taking the pictures, though Bell denied receiving them. In 2006, Hudgens guest starred on Drake and Josh, as Bell’s on-screen girlfriend, before going on to star in High School Musical. Though details about whether or not Hudgens dated Bell before fame are unknown, she was soon linked to another on-screen boyfriend.

The actress rose to fame through High School Musical. The Disney movie gave a big boost to young stars like Zac Efron, Vanessa Hudgens, and Ashley Tisdale. It was after playing teenagers in love that Hudgens and Efron began dating! The on-screen couple became an off-screen couple in no time, with both Disney stars being the talk of the town.

But the couple broke many hearts when they announced their breakup. People who fell in love with the Disney movie franchise were upset that the romance could not last in real life. The relationship that saw many ups and downs for about five years allegedly ended in part because Efron’s many female fans got in the way, and Hudgens was reportedly “fed up.”

Vanessa Hudges dated Josh Hutcherson before falling for Austin Butler. The couple starred in Journey 2: The Mysterious Island, but their romance was short-lived. They broke up in 2011, but remained on good terms, even doing press for the movie together while she was dating Austin Butler.

The dreamy couple has been together for almost six years now, and by the looks of things, they are still as solid as ever! Though they spent some time apart while Butler was in New Zealand filming the second season of MTV’s The Shannara Chronicles, the two managed to make the best of it, and spend as much time together as possible.

Hudgens even posted a picture with Butler on Instagram, captioning it “Missing this guy” while the two stars were on different continents. The couple was spotted last June, with Hudgens wearing Daisy Dukes, showing off her toned legs and her man! More recently, Butler and Hudgens were at Universal Studio’s Halloween Horror Night, taking pictures with fans while checking out the haunted houses.