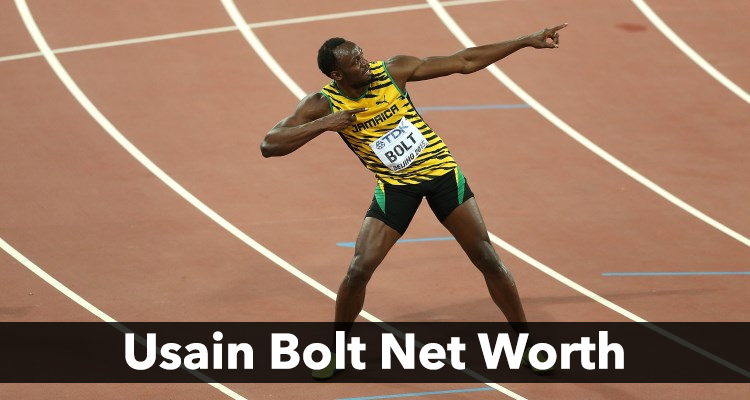 It’s hard to say which one is rising faster; Usain Bolt’s medal count or Usain Bolt’s net worth. But how much is Usain Bolt worth? Well at last check, he was worth upwards of $30.0 million! That’s nothing to speed past. Except that he’s looking to become the first sprinter to win the triple gold at three consecutive Olympic Games. And if he does accomplish this feat, the next question might be; who will be happier? Usain, his family, or his girlfriend? Find out, as we bring you the details on the world’s fastest man now that he’s set to compete in the 2016 Rio Olympics.

Putting in the Work

You don’t just wake up one day and become the world’s fastest man. Even when you’ve been fated with the last name Bolt, it takes a lot of hard work, consistency, and an insane amount of confidence to succeed. Bolt has shown he is capable of all three, the latter of which has endeared him to fans and the media alike. In a recent interview with CNN, Bolt predicted that he would win all three races in which he is competing. He said, “I’m going to win the 100m. I never try to predict times; I avoid that because you never know. I’ll win all three gold [medals], there’s never anything else for me when it comes to a championship.”

He also went on to say that he hopes to break the 200-meter record in a time of 19 seconds flat! That’s ambitious, but it’s that type of attitude that has helped Bolt to become what many experts consider the greatest sprinter of all time.

Bolt was just 15 years old when he became the youngest junior world champion of all time by winning the 200 meters. That was back in 2002, when the World Championships were ironically held in his home island of Jamaica, where is house is still located today. Bolt was just 15 at the time.

He Continues to Make History

2002 was just a glimpse of what was on the horizon for Bolt. He really turned it up at the Beijing Olympics in 2008. Not only did Bolt win three gold medals, but he also set three world records. Bolt beat the current 100 and 200-meter record, and then his 4×100 meter relay team set a record in their respective race. In addition to those astonishing accomplishments, Bolt was the first Olympian ever to win and break records in the 100 and 200 meter events in the same games.

There was no slowing down in 2012’s London Olympics, either. Bolt repeated his triple gold performance, and his relay team broke another record with a time of 36.84 seconds. In addition to that team record, Bolt also set ridiculous standards for his individual sprints, as well.

His time in the 100-meter sprint is a staggering 9.58 seconds. His 200-meter time is just as impressive, clocking in at 19.19 seconds. They certainly don’t call him “Lightning Bolt” for no reason!

The prize money for winning these races and setting all these records isn’t nearly enough for Bolt. He’s worked his way up to become one of the most recognizable athletes on the planet, and with that type of branding comes big dollars.

The most lucrative of all these endorsers has been Puma. Though there has been no official statement confirming the details of the contract, reports from several sources (including Forbes) puts the amount to approximately $10 million per year. For someone who is simply a track star who typically doesn’t get the coverage to warrant this type of salary, this is a considerably large sum!

Forbes also puts Bolt’s previous 12 month earnings at an eye opening $32.5 million. And it took more than Puma for Bolt to rake in that cash. Gatorade nabbed up the world record holder with a new drink called the Gatorade Bolt. So, add 10 more global partners to Bolt’s portfolio, and you can begin to see where the bulk of that $30 mill comes from. And in a show of loyalty, Bolt’s most recent contract with Puma extends to 2025. He’ll be an old man by athlete standards by then, but it goes to show how much of a brand he’s created for himself!

But with his track record (pun intended), no one deserves it more than Bolt. His career has been nothing short of phenomenal and he is looking to add to his legacy at this year’s Rio 2016 Olympics. The 29-year-old has announced that it will be his last go on the Olympic stage. Fittingly, the last day of the Olympics is August 21, Usain Bolt’s birthday! A couple of shiny new gold medals would definitely make the perfect birthday gift!