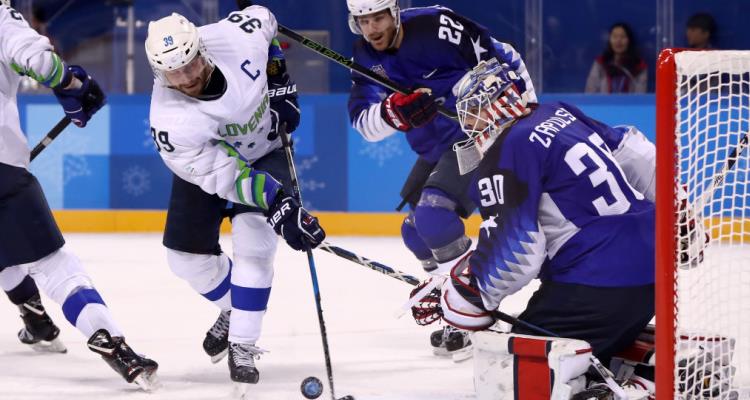 The 2018 Pyeongchang Winter Olympics games are under way, which means that many fans around the world can watch their favourite event, ice hockey! With there only being one game played in the round robin, there is already an upset; team USA was defeated by the Slovenia hockey team, with a score of 3 to 2. Let’s go through what exactly happened and how big of a deal the lost actually is. Let’s also take a look at the USA vs. Slovenia hockey highlights video everyone is buzzing about!

Both the USA and Slovenia teams played their first game within their Group B preliminary round robin and it was a nail-biter! The first to get on the board was team USA with a goal by Brian O’Neill, right before the end of the period. In the second period of the game, team USA expanded their lead with another goal, with approximately half the period remaining. Jordan Greenway scored the second for team USA; his first career Olympic goal!

Less than a minute into overtime, Slovenia scored to complete the unset victory. (And the crowd went wild!)

As expected, people can’t believe the way the game went and are interested to re-watch history unfold. Below are the highlights of the game winning goal scored by Slovenia to upset team USA.


How Are the Results Being Felt by the Sports World?

With the upset victory hockey and sports fans took to twitter to roast team USA. Below are a few examples:

What an awful collapse for USA hockey.

Can Team USA Make It to the Elimination Rounds?

Team USA is in the same group as OAR (which is technically Russia, playing under the Olympic flag), Slovenia, and Slovakia. Team USA must play OAR who are the tournament favourites and Slovakia, the current leader of the round robin group.

For team USA to advance to the next round, they must at least have one victory and have one game go to overtime. Or, if they win both their games, they will automatically make it to the next round! So, here’s hoping! There is still a chance that team USA makes it to the next round. This loss to Slovenia seems more like a game that was played with nervous jitters. (Let’s hope it’s out of their system!)

Regardless of the math behind it, we believe that team USA has their back against the wall and is looking at the next game as a must-win game. They’ve got to prove that they are a contender in the tournament and this can cause fear to their opponents.

With there being no NHL players in the 2018 winter Olympics, it has certainly created a void in the tournament. There isn’t the same enthusiasm as there normally is surrounding the ice hockey tournament.

Teams that tend to be the favourites in the tournament are losing to less skilled teams as a result. The game between team USA and Slovenia was not the only upset, OAR lost to Slovakia. For the countries that are upsetting their opponents, it’s great for the players and their country. However, financially, the countries that are ranked at the top are the ones that bring in the most revenue from merchandise sales and viewership by fans. Therefore, the upsets hurt the bottom line for the Olympics and South Korea (as the host country).

The reason why the NHL is not involved in the 2018 winter Olympics is because there was a disagreement when it came to the revenue split between the Olympics and the NHL. If things on the financial side are not meeting the standards of the Olympic committees, then it may reconsider giving more revenue to the NHL at the 2022 winter Olympic games.