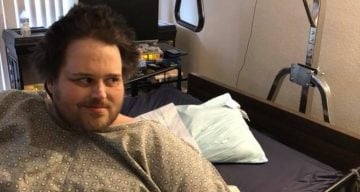 James King was the most difficult case Dr. Younan Nowzaradan had ever encountered on My 600-lb Life. Tipping the scales at almost 800 pounds, he needed life-saving surgery. However, he was rejected by Dr. Now.

My 600-lb Life last saw James King being rejected for surgery by Dr. Nowzaradan. After leaving viewers nervous about his fate outside the show, James returned to My 600-lb Life: Where Are They Now. The latest episode gives an update on James’ current situation since being refused the life-changing surgery.

What Happened to James from My 600-lb Life?

James is one of the heaviest patients to be featured on My 600-lb Life. But his stubborn refusal to lose weight upset Dr. Now and infuriated viewers.

It came as a mild surprise to many that the doctor sent James, his daughter Bailey, and his girlfriend Lisa Raisor, home without treatment. He was the first patient to be refused bariatric surgery on the show.

Since leaving the show, viewers have been looking for updates on his condition. And it was shocking, to say the least.

James’ life after the show has been difficult. He continues to be bedridden and deals with constant pain and discomfort. His situation became extremely serious in January, and he was close to death.

A few months ago, James had a major health crisis. He was hospitalized in Houston with kidney failure. He spent time in the ICU for sepsis and fatty cirrhosis of the liver.

Lisa posted an update about his health on Facebook that worried fans, which read, “James is still in the ICU and yes he has been diagnosed with sepsis and first stage cirrhosis of the liver.”

She said that his condition was “caused from having a fatty liver, which in turn our liver kidney specialist has told us this will make it harder to lose weight and is the reason James has gained fluid in his body.”

His condition was dire as his kidneys were shutting down and his blood pressure dropped. A Reddit user checked on James and confirmed his condition. The person was also afraid that James wouldn’t make it through this alive.

Fortunately, doctors were able to get the sepsis under control, and James was saved. Lisa claimed that James was losing weight again now.

Already morbidly obese, a previous medical accident left him bound to a bed and resulted in uncontrolled weight gain until he was almost 800 pounds.

A Difficult Decision for James

After leaving the show, James attempted to lose weight. Together with a physical therapist named Rudi Pijnnaken, he and Lisa had reportedly made a breakthrough in his stubborn mindset.

Dr. Now told James to come back when he reached a certain weight.

In the latest episode of My 600-lb Life: Where Are They Now, James was determined to get a spot in Dr. Now’s program. He was seen doing various exercises two or three times a day in his bedridden state, and he follows a strict diet of 800 calories a day.

Sticking to the doctor’s regimen has improved his energy levels tremendously. But James’ condition is far from improving. He is struggling with cellulitis and leg infections, and his liver’s health is still not ideal.

Dr. Now’s growing concern is the setback in James’ progress.

In his attempts to get back into the weight-loss program, James has been gaining back whatever weight he lost. He’s obviously sneaking extra calories on the down-low, and it’s showing.

It now comes down to the point where Dr. Now asks James to make a choice. James must either remove Lisa as a primary caregiver and stay under his medical supervision or leave with Lisa, without treatment.

Experts opine that James needs to prove his commitment to weight loss and convince Dr. Now to perform the bariatric surgery on him. If he’s kicked out of the program again, it could mean an early death for James.

James King’s decision will be revealed when My 600-lb Life: Where Are They Now airs Wednesdays at 8:00 p.m. EST on TLC.