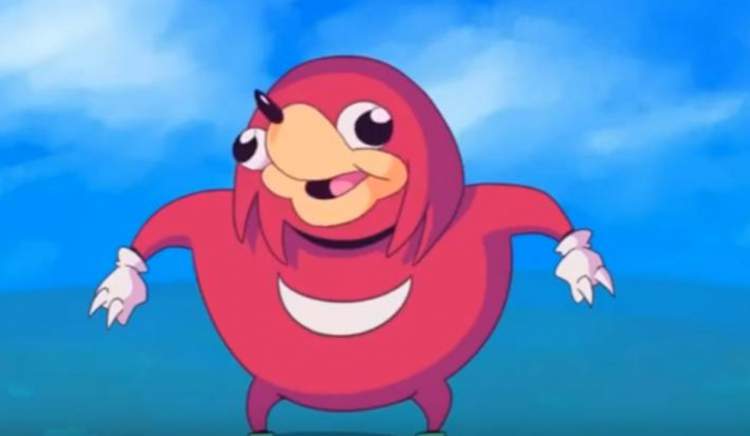 Are you reading “do you know de wey” one too many times on the Internet and have no idea what it’s about? That, dear folks living under a rock, is the catchphrase of the hottest meme on the Internet right now: The Ugandan Knuckles.

By now, you may have seen the distorted version of Knuckles (the Echidna from the Sonic the Hedgehog series) all over the Internet. And why is he asking you for the way? The popular animated red echidna has taken on a whole new persona online and sparked a meme trend. If you’re asking what Ugandan Knuckles is, you’re not alone. We have a primer on the meme to get you up to speed with the meme that’s currently taking over the Internet.

Who Is Ugandan Knuckles?

Many are pretty familiar with Knuckles from Sonic the Hedgehog —even if they never played the popular Sega video game. In a world where Pepe the frog is dead, the red echidna morphed into a meme-tastic presence on the Internet.

The credit for unleashing this meme upon us goes to YouTuber, GregZilla. The animator posted a review of the Sonic Lost World game in February 2017 and added an animated video to go with it. This video featured a shorter and fatter version of Knuckles.

Creative geniuses online took this version of Knuckles and made art and videos. Soon, the Ugandan version surfaced.

The Ugandan Knuckles version is inspired by a low-budget Ugandan movie, Who Killed Captain Alex? The 2010 action-comedy contained lines like “Do you know the way,” but in an African accent. If we were to write it phonetically, it would read something like “do you know de wey?”

The virtual reality social game, VRChat brought the distorted Knuckles and the catchphrase together. It has since sparked a trend where several videos showing avatars of Ugandan Knuckles troll other players.

The Ugandan Knuckles videos use different versions of the “de wey” catchphrase in an African accent, and add clucking sounds in apparent imitation of some African languages. Though a popular meme, this trend has been accused of racial stereotyping.

Even Sega admonished the Ugandan Knuckles trend in a single tweet.

Let us show you the way… to make the world a better place.https://t.co/7x1O3xAvA1 pic.twitter.com/Pt06bB5Zcx

Remember when Pepe the frog went from an innocent comic to a means of making a political statement? The Ugandan Knuckles trend appears to be taking the same route, and it may soon be dead.

Until then, we’ll make the most of it with these Ugandan Knuckles’ memes! Check some of them out below!

#3. Waiting on that collaboration with Lil Pump.

i’d listen to that

#4. Coming soon to a theater near you.

uber is on de wae

#8. The progress is astounding!