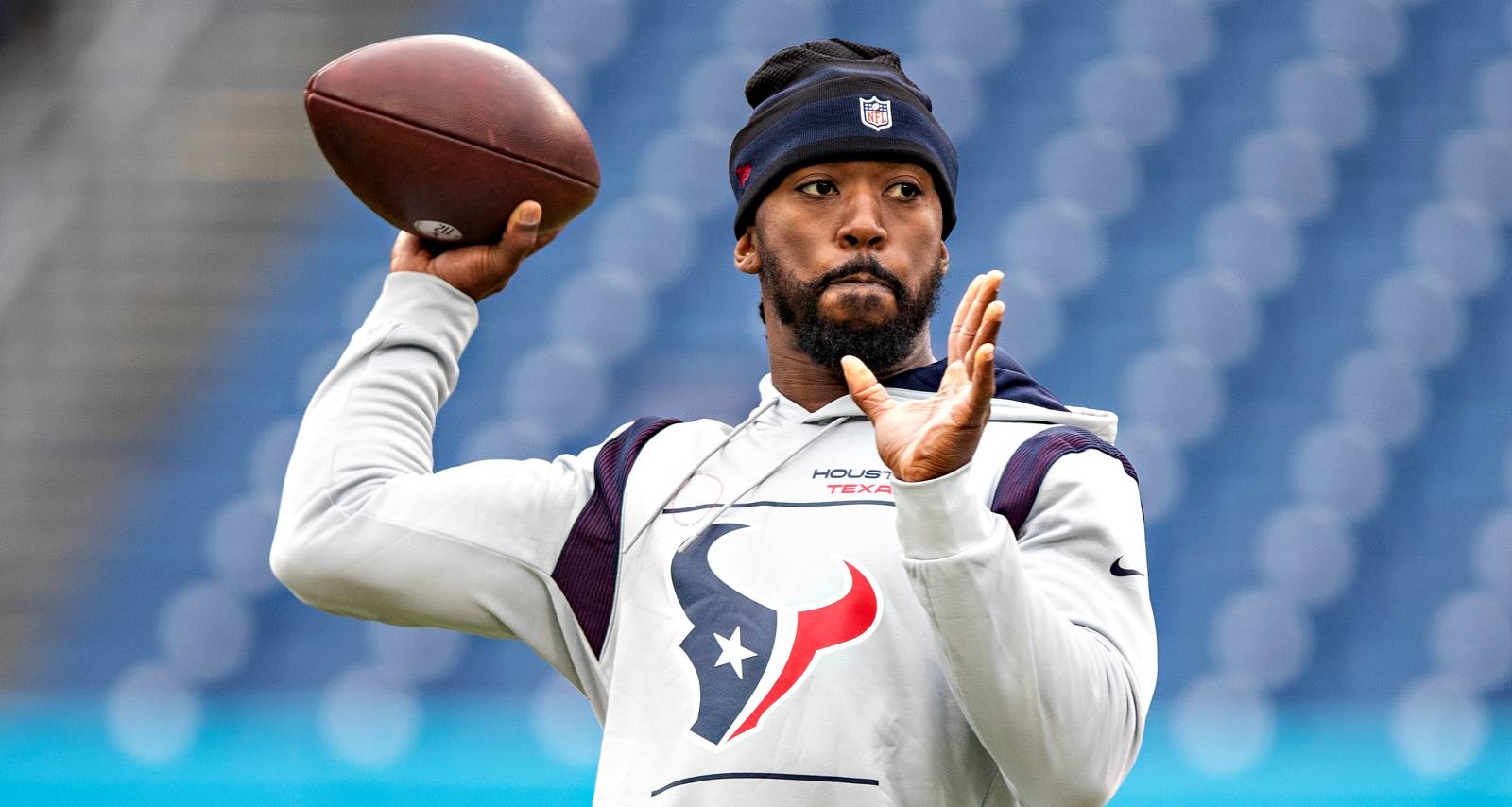 Tyrod Taylor #5 of the Houston Texans warms up before a game against the Tennessee Titans at Nissan Stadium on November 21, 2021 in Nashville, Tennessee. The Texans defeated the Titans 22-13. (Photo by Wesley Hitt/Getty Images)

Injuries are common in the NFL and the League often faces problems when players get injured. The NFL’s Concussion Protocol came into play in the first match when the Carolina Panthers’ quarterback, Cam Newton’s head took some serious abuse. This time, the Protocol had Tyrod Taylor forced off the field after repeated hits to the head. NFL fantasy league lovers curious about the Buffalo Bills quarterback, his wife, contract, net worth, and college career have come to the right place. We have all you need to know about the 6 ft 1 footballer.

The Buffalo Bills quarterback took hits from several line defenders and at one point, even his helmet came off! However, he continued to play unfazed until referee Ed Hochuli approached him in the middle of a huddle, and told him he had to leave the game to get evaluated for a concussion. Taylor resisted but relented when others led him to the sidelines. After speaking to the doctors, he returned to the game.

For those wondering who is Taylor’s wife or who is he dating; the answer is football. The 27-year-old has been playing for so long (since he was in high school to be exact) that he has never even been seen dating! Either he keeps his relationships hidden or he’s very dedicated to football.

The quarterback’s total worth in 2016 is estimated to be a whopping $2.5 million, playing for the Buffalo Bills. That’s a big progress from his $1.6 million net worth when he played for the Baltimore Ravens from 2011 to 2015! He signed a contract with Bills for $3.3 million in 2015.
Last month, the Bills extended his contract by six years, making it worth $92 million! Experts believe he is worth the investment. Just look at his stats for yourself and you’ll see why they dished out the money for him!

Tyrod Di’Allo Taylor was born in Hampton, Virginia to Rodney and Trina Taylor. He played football, basketball and track when he studied at Hampton High School.
When Taylor graduated high school in 2007, Rivals.com rated him as the No. 1 dual-threat quarterback. ESPN.com rated him as the No. 3 overall quarterback, and Scout.com hailed him as the nation’s seventh-best passer! Taylor had his pick of colleges, and he opted for Virigina Tech over University of Florida.

Taylor was a quarterback for the Virginia Tech Hokies, from the 2008 College Football season up to the 2011 Orange Bowl. Taylor was instrumental in earning the Hokies their first victory against Florida State in two decades. Injuries to his ankles inhibited his play during his Freshman and Sophomore years. He had to sit out some games or rotate with other players. Taylor led the Hokies to victory against Cincinnati, Boston College, and Tennessee making a career record of the second most wins of all time for a starting quarterback at Virginia Tech.