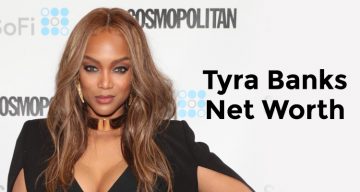 Tyra Banks is a world-renowned former model, American television personality, and businesswoman. It comes as no surprise that her net worth is $90.0 million. With her successful career, Banks is reaching new heights! Let us take a look at Tyra Banks’ net worth.

Tyra Banks is not just a former supermodel, she is also a very successful businesswoman. She has co-created the popular show America’s Next Top Model and has appeared in several movies too. How much is Tyra Banks worth? Keep reading because we will provide you with all the information about Tyra Banks net worth, and more!

How Much Did Tyra Banks Make from Movies?

As both an actress, and appearing as herself, Tyra Banks has made a good chunk of money from her work in films.

Banks was Born in Inglewood, California

Tyra Lynne Banks was born on December 4, 1973, in Inglewood, California, to Carolyn London-Johnson and Donald Banks. Her father is a computer consultant, and her mother is a medical photographer, and the two divorced when Banks was six. She has one older brother named Devin Banks. Tyra Banks disclosed that while in school, she was called “ugly duckling.” However, when she was 11 years old, she grew three inches long and lost 30 pounds in three months.

Banks Started Modeling When She Was 15 years old

She entered the modeling world at the age of 15 and was initially rejected by four modeling agencies. She was later selected by L.A. Models, and eventually signed on with Elite Model Management. Banks has appeared in several editorials such as the French, Spanish, American, and German Elle, the Malaysian, German, and American Harper’s Bazaar, and the Spanish, Italian, American, and French Vogue.

She was also featured on the covers of various magazines such as the French and Spanish Vogue, Elle, Teen Vogue, Harper’s Bazaar, Seventeen, and Cosmopolitan. Additionally, Tyra Banks has walked the runway for major fashion brands such as Chanel, Oscar de la Renta, Yves Saint Laurent, Christian Dior, Donna Karan, Calvin Klein, Valentino, and others.

Banks was the first African-American woman to be featured on the covers of GQ and the Sports Illustrated Swimsuit Issue. She has received several awards and recognition for her work in the 1997 VH1 award for supermodel of the year. In 1997 she was the first African-American woman selected for the cover of Victoria’s Secret Catalog. From 1997 to 2005, she was Victoria’s Secret Angel. Banks is now focusing on her TV shows and movies.

Apart from modeling, Banks has appeared in a couple of TV shows and movies. Her career in the television industry began on The Fresh Prince of Bel-Air. Other TV shows Banks appeared on include Felicity, All That, MADtv, Nick Cannon’s Wild ‘n Out, The Price Is Right, and Space Ghost Coast to Coast. Banks even started a production company known as Bankable Productions. This production company created the shows The Tyra Banks Show, America’s Next Top Model and the movie The Clique. She has appeared in several movies like Higher Learning, Life-Size, Love Stinks, Love & Basketball, Coyote Ugly, and Hannah Montana: The Movie.

Banks is a very talented businesswoman. She has tried her hand in everything from modeling to writing a book. She has also appeared in several music videos like Michael Jackson’s “Black or White,” and Lionel Richie’s “Don’t Wanna Lose You.”

In 1998, Banks co-authored a book Tyra’s Beaut Inside & Out with Vanessa Thomas Bush. She released Modelland in 2011, which she wrote herself, and is based on her experience in the modeling industry. She founded her cosmetic brand Tyra Beauty in 2014.

Who is Tyra Banks’ husband? Though not yet married, Banks has been dating Norwegian photographer Erik Asla since 2013. Their son, York Banks-Asla, was born on January 27, 2016, via surrogacy.

The 42-year-old has made a mark in the modeling industry. Is is due to her diligence and determination that she has come this far in her life and career. She lives in a Pacific Palisades mansion worth $2.0 million and has a swimming pool and an office. Banks drives a Lexus SC430 which is worth $66.000. We can’t wait to see what other ventures Tyra Banks is a part of in the future!