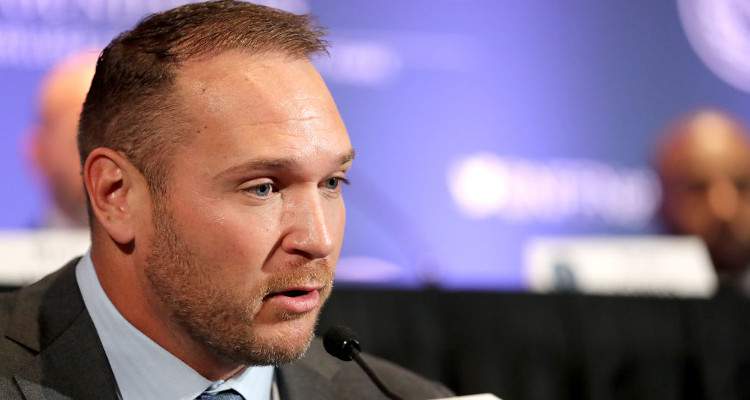 It’s a battle of the exes for Tyna Karageorge and Brian Urlacher! The former NFL pro and his ex already had showdowns in court over their son’s custody. This time, Brian Urlacher’s baby mama has sued him for defamation.

Former Chicago Bears’ linebacker, Brian Urlacher is no stranger to legal battles with his ex, Tyna Karageorge. But this time, their fight just got uglier. Tyna Karageorge and Brian Urlacher’s son, Kennedy has been the subject of a bitter custody battle. After much back and forth between his parents, it was last known that Urlacher sought custody of Kennedy.

But Karageorge now filed a lawsuit against the former footballer that could prove very costly for him. Find out about Brian Urlacher’s ex and her lawsuit in Tyna Karageorge’s wiki here.

She Was in the Public Eye

Before her bitter custody battle with a famous footballer played out in public, Tyna Karageorge was well-known in the media. In 2003, then Tyna Marie Robertson sued dance legend, Michael Flatley of sexual assault.

Flatley, an Irish-American dancer who rose to worldwide acclaim with Riverdance, Lord of the Dance, Feet of Flames, and Celtic Tiger, denied the allegations. According to some reports, Robertson worked as a real estate agent while some reports called her a former stripper.

She alleged that Flatley raped her in a Las Vegas hotel in October 2002. Her attorney, Dean Mauro threatened the dancer to file a sexual assault suit unless he agreed to a “eight figures” settlement, thought to be around $30.0 million.

Flatley refused, claiming that their encounter was consensual. He even added that she was “relaxed and happy” as they had breakfast the morning after the alleged sexual encounter. He countered with allegations of defamation, extortion, and fraud against Robertson and her lawyer.

Karageorge’s $33.0 million civil lawsuit was dismissed in Illinois, and Flatley filed a counter-suit for extortion and defamation. Her claims were proven false and she was ordered to pay the dancer $11.0 million in 2007.

It’s not known when Tyna Marie Robertson began a relationship with Brian Urlacher. Before losing her suit to Flatley, she gave birth to Urlacher’s son, Kennedy in 2005. Urlacher has two daughters, Pam and Riley, with his ex-wife, Laurie.

While his daughters live with him, he shares joint custody of Kennedy with Karageorge. The pro-turned-analyst was engaged in a long legal dispute with his baby mama. Allegations flew between both parties in the fight for their son. In 2005, he filed a paternity suit to establish that he’s Kennedy’s biological father.

Karageorge alleged that Urlacher painted then three-year-old Kennedy’s toenails blue and made him wear a pink Cinderella pull-up. He countered that Karageorge stooped low by talking to the media.

“I don’t [care] what she says about me or what anyone else says about me, but she’s putting my son in the paper again,” he said. “He did get his nails painted. Yes. [My daughters] painted his nails. So what? His sisters were painting their nails, so he was like, ‘I want to paint my nails.’ He’s 3 years old. Who cares? And, yes, he did have a pull-up on of his [sister’s]. But she wears his pull-ups also. His were out, so he put on one of hers. … So what? It’s a pull-up.”

Robertson went on to marry one Ryan Karageorge, who became Kennedy’s stepfather. Their marriage was cut short when Ryan died on December 29, 2016, after an argument with Tyna. Urlacher filed an emergency petition for Kennedy’s temporary custody after the incident.

34-year-old Ryan died of a self-inflicted gunshot wound to the head. According to Tyna, they were arguing after a birthday party when he grabbed her purse, pulled a gun out of it and shot himself. His death was ruled as a suicide.

In court documents filed by Urlacher for Kennedy’s custody, he mentions “suspicious circumstances” around Ryan’s death. Urlacher was awarded temporary custody of Kennedy while the investigation into Karageorge’s death was open.

But now, 45-year-old Tyna Karageorge filed a defamation suit against Urlacher, claiming that he plotted to brand her as “a bad Mother, unfit and a killer.” She’s requesting $125.0 in this suit.

The suit also names the Chicago Tribune and its reporter, David Haugh, saying they conspired to portray her as a “killer.” The Tribune published a piece by Haugh about Urlacher filing for temporary custody of Kennedy.

Urlacher’s side released a statement saying that Karageorge only rehashed false statements, and there is no case of defamation. The Tribune also stated that Haugh’s report was based on court documents and defames no one.