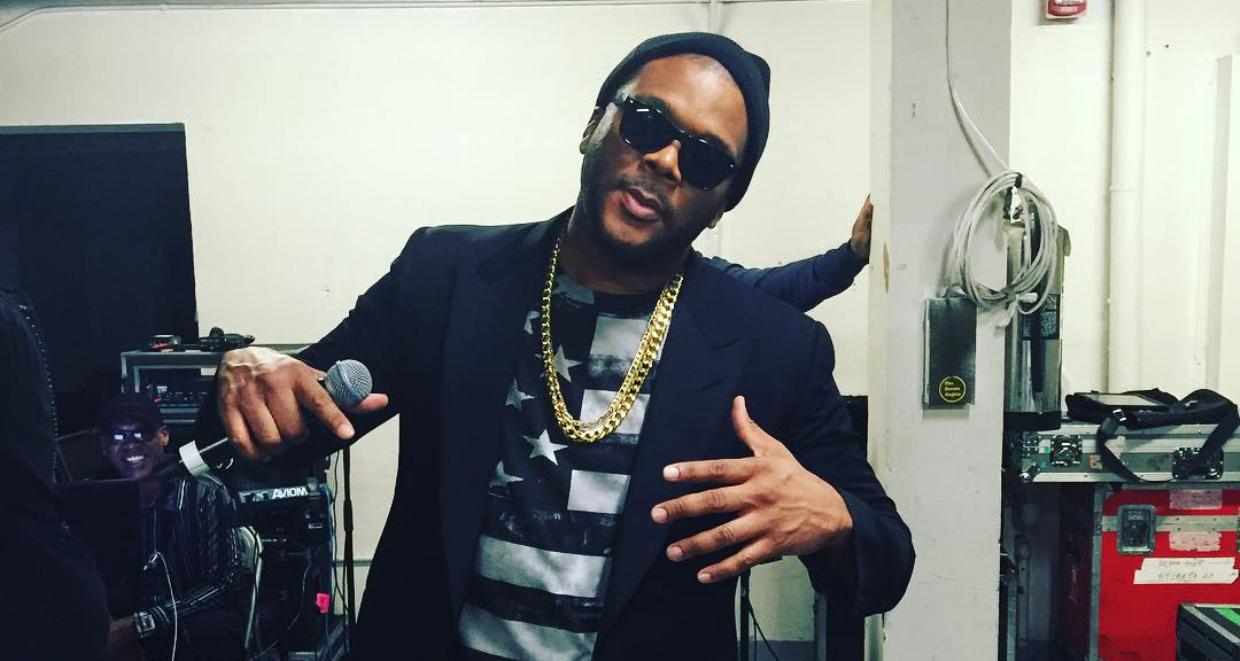 Tyler Perry during the "Madea on the Run" Tour. Credits:Instagram/tylerperry

Madea’s back y’all! One of the best characters of all time is making another Halloween appearance on the big screen, and actor Tyler Perry is more than excited about the Boo 2 release. Keep reading if you want all the details from Tyler Perry’s wiki.

Tyler Perry is all ready for the release of his latest Madea movie. Boo 2 is set to hit the theaters on October 20, 2017, and we can’t wait to watch it! So, mark your calendars and keep your friends and family in the loop because Halloween just got a whole lot funnier!

But before we get into more details about Boo 2, you have to take a look at our Tyler Perry wiki and check out how he made his impressive net worth of $600.0 million!

A Childhood of Fear

Emmitt Perry Jr. was born on September 13, 1969, in New Orleans, Louisiana, to Willie Maxine Perry and Emmitt Perry Sr. His father was very abusive to his son, with the actor once recalling that the elder Perry’s “answer to everything was to beat it out of you.”

Although he could seek solace in his aunt Jerry, he became a victim of sexual assault at a young age. The first, he revealed to Oprah, occurred at the hands of a neighbor when he was five or six.

In other instances, Perry opened up about having a male nurse, a man he knew from church, and a friend’s mother who forced him into sex when he was just 10. It would not be until later that Perry learned that his father was molesting a child.

In 2010, a DNA test revealed that Emmitt Perry Sr. was not Tyler Perry’s biological father. When he was 16, he legally changed his first name to Tyler and continued to find refuge in church with his mother.

Perry did not finish high school but has a GED. While watching The Oprah Winfrey Show in his 20s, he heard someone mention how writing was very therapeutic. It inspired him to try it out, so he took to writing down his thoughts on paper as a letter to himself. He soon began writing more and more, which led to his success today.

Tyler Perry grew into a passionate person. And at 22 years old, he saved $12,000 to move to Atlanta and produce his first play, I Know I’ve Been Changed, about dignity, self-worth, and above all, dysfunctional families. He addressed the serious issue of child abuse, but it did not do well, leaving Perry to work odd jobs and live in his car.

For the next six years, he continued working hard. His redemption came in 1998 through another stage play, where he opted for a more savvy marketing strategy, allowing him to see some success. He then traveled with the urban theater circuit, then called the “Chitlin Circuit,” which had a major African-American following.

Ok! Throwback Thursday. Me in the 80s. LOL #tbt

In 2005, it was estimated that Perry sold over $100.0 million in tickets, bringing about 35,000 people to his audience each week for his 300 live shows. The same year, he managed to raise a whopping $5.5 million to produce his first feature film, Diary of a Mad Black Woman. The movie was a success and garnered $50.6 million domestically.

The next year marked a milestone for Perry, as he produced his first Madea movie, Madea’s Family Reunion, which grossed a staggering $30.3 million.

The franchise was then given a whole line of Madea movies. And in 2009, Madea Goes to Jail was released and made $41.0 million, followed by I Can Do Bad All by Myself.

He was soon approached by David Fincher for Gone Girl. And Perry was cast alongside Ben Affleck and Rosamund Pike.

After branching out with a variety of plays and films, another Madea movie was out. A Madea Christmas proved again to be a success for Perry and his first animated film, Madea’s Tough Love, was released in 2015.

Does Tyler Perry Have a Girlfriend?

Tyler Perry is very private when it comes to his personal life, but we do know that he has been dating Gelila Bekele since 2009. Although there is no news about the couple getting married, they are already a family.

Perry and Bekele welcomed their son, Aman, back in 2014, and the couple has kept him under the radar ever since. Perry said in an interview that he is a very typical father, and does not want to expose his little boy to Hollywood so soon.

My Father's Day surprise this morning. I had no idea the joy this little boy would bring and restore to my heart. Being a father is not just a gift, it's a beautiful responsibility and blessing. Happy Father's Day to all the dads that are doing it right, and to all the ones that aren't, it's never too late to try! God bless.

News of Tyler Perry’s new house broke the Internet, as it was revealed that the actor purchased Alfred E. Mann’s previous home after he died in 2016. The Beverly Hills mansion cost him a skyrocketing $14.5 million, and the home is fully loaded with all the amenities.

The 17,245-square foot home has seven bedrooms and 11 bathrooms, complete with glass-walled architecture, an entrance with a sculpture, and a space for 30 private cars, open-tread stairs, and a family room.

I named this place Revival Bay because every time I'm here I JUST FEEL BETTER!! Arms wide open to be a blessing and receive a blessing!! Thank you God!!

It is estimated that the comical genius is worth a jaw-dropping $600.0 million. Perry worked very hard and endured a lot of challenges to earn every penny of the fortune, and the 48-year-old will continue to do so.

Tyler Perry’s new book, Higher Is Waiting, is also set to come out in November.

Here’s a breakdown of Tyler Perry’s net worth: