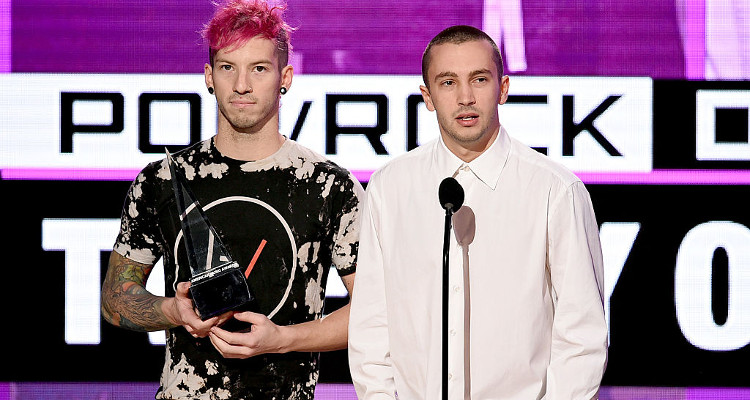 Twenty One Pilots have been making great strides in the music industry in the past year, and there’s no stopping them in 2017 either! The duo is winning awards while preparing new music for their fans.

Fresh off a hugely successful 2016, Twenty One Pilots is striving to return the love they’ve received from their fans, through new songs and remixes of their hits. Last year was immensely successful for Tyler Joseph and Josh Dun. Apart from Billboard chart-topping hits and several award nominations, the group won big at the American Music Awards, Billboard Music Awards, MTV EMA, iHeartRadio Music Awards, and VMAs. The duo has a total of five Grammy nominations for 2017, and it looks like the year ahead is going to be just as busy and rewarding. Twenty One Pilots has also made it to the Forbes’ 30 Under 30 List. In their AMA speech, they have attributed their success to their fans. So, what does Twenty One Pilots have in store for 2017? Find out here.

Twenty One Pilots Collaborate with MuteMath

So far, Twenty One Pilots hasn’t announced any plans to release a new album. The duo is currently busy performing sold-out concerts of their Emotional Roadshow World Tour in support of their 2015 hit album, Blurryface. But that doesn’t mean Tyler Joseph and Josh Dun have taken a hiatus from the studio. The duo recently collaborated with Alt-Rock band MuteMath and recorded new versions of five of their songs, which they want their fans to listen for free.

On December 19, 2016, Twenty One Pilots announced through Twitter that they have recorded five of their hit songs, including chart-toppers like “Heathens” and “Ride” with MuteMath.

Twenty One Pilots are constantly reminding fans that they can only stream their music through social media for free for a limited time. Their collaboration tracks will be available for free until January 18, 2017. If you have not already, check out the tracks while you still can!

our session w/ @MUTEMATH is still available to stream & download for free. https://t.co/kQiSHidzmT

thanks for an unforgettable year. |-/

Twenty One Pilots will surely ride the wave of success from 2016 into 2017. The Emotional Roadshow Tour’s next stop is at Providence, Rhode Island on January 17. Tickets can be purchased on Twenty One Pilots’ web site. Most of their January concerts are already sold out, but tickets for other dates are still available. Take a look at their site to see if tickets are available for a city near you.

The duo, and their fans, have a reason to celebrate this year as Twenty One Pilots is nominated for five Grammy Awards this year. “Stressed Out,” their third single from Blurryface that ranked #2 on the Billboard Hot 100, is up for Record of the Year and Best Pop Duo/Group Performance. “Heathens” written and recorded for the Suicide Squad soundtrack has been nominated for Best Rock Performance, Best Rock Song, and Best Song Written for Visual Media. It will be the duo’s first appearance as nominees at the Grammy Awards.

So far, there’s no word on a new album from Twenty One Pilots, but the Emotional Roadshow World Tour ends in April. Maybe Dun and Joseph will be ready to hit the studio and record some fresh tracks later this year?