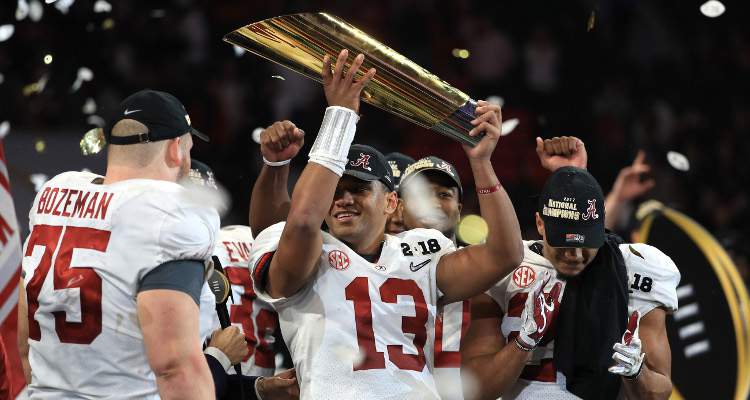 Alabama has a new NFL hero, as his touchdown was so impressive, it will go down in Alabama college football history! We’re talking about Tua Tagovailoa, the quarterback for the Alabama Crimson Tides. With an extremely close 26-23 win over the Georgia Bulldogs, Tagovailoa took home the title—and then some! Keep reading our Tua Tagovailoa wiki for everything you need to know about this talented player.

Alabama has won the national championship for the fifth time since 2009, and their recent overtime victory proves why they deserve the title. The Crimson Tides were behind in the first half at 13-0, but the tables turned in the second half of the game.

Tua Tagovailoa took over, and nobody could stop the Crimson Tides after that. Then, DeVonta Smith ran 41 yards for the winning touchdown to connect with Tua Tagovailoa’s throw and it was absolutely epic!

Tagovailoa was born and raised in Honolulu, Hawaii, and has been playing football since his early childhood. Friends who can’t say his name right simply call him Tua T.

Tagovailoa moved 4,300 miles from Hawaii because of his love for football, and he’s shown time and again how valuable he has become for his team. He was even offered a position on other illustrious teams like Arizona, LSU, Louisville, Oregon State, and UCLA (to name a few) before Tagovailoa signed on to Alabama.

But according to Tua Tagovailoa, Alabama was the team for him, as he felt that they were on top. He was a five-star recruit, and the freshman immediately came across as a success on the field.

The six-foot-one quarterback took over Jalen Hurts in the recent game, after which the Crimson Tides won the national championship game against the Georgia Bulldogs. Hurts was the only scholarship passer for the Crimson Tides before Tagovailoa.

If Jalen leave next year will he start.. I think he will be he can throw the ball and he’s mobile! #tuatagovailoa #alabamacrimsontide #alabamafootball #rtr

Monday’s game showed the football world what a switch in players could do! Alabama was 13-0 halftime, and when all hope was lost, Tua Tagovailoa arrived on the field to save the day!

Nick Saban, the coach for the Crimson Tides, made a quick decision to try and save the game. Alabama quarterback Jalen Hurts was benched after the game took a hit and he was replaced with freshman, Tua T.

Tagovailoa completed 13 passes of 23 for 125 yards, ran 27 yards, and even scored two touchdowns! The Crimson Tides were just about to take home the trophy when the 36-yard field goal attempt by Andy Pappanastos missed wide left, putting the game in overtime.

The Bulldogs were 23-20 after Rodrigo Blankenship’s 51-yard field goal was a success. But, the score didn’t stay in favor of the Bulldogs for long.

Although Tagovailoa was sacked down by Davin Bellamy and Jonathan Ledbetter, he saw Smith sprinting forward, leaving the Bulldog’s secondary behind. He took the chance for a perfect touchdown.

Learn more about Tua Tagovailoa career and stats below.