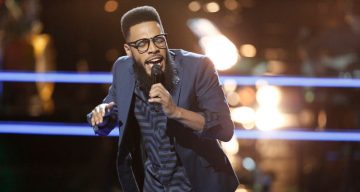 TSoul has a unique voice that is full of soul and emotion and all four judges were impressed with both of TSoul’s performances so far on The Voice. This 29-year old gospel singer from Richmond, Virginia has what it takes to win The Voice 2017.

TSoul is a singer who has made everybody on The Voice 2017 sit up and take notice. Each of the four judges have complimented TSoul on his voice, passion for singing, and the natural ease with which he belts out the toughest of songs. Coach Blake Shelton even said that he was a fan of TSoul’s speaking voice. For the aspiring singer, The Voice has become a platform for him to show his talent —and he is doing it well! People are eager to know more about him, so we have some details from TSoul’s wiki.

What a week!! All the love is truely amazing! Thanks to #TSouldiers New and Old hopping on the #TSoulTrain @TeamTsoul & #TeamBlake ??????????? Can take it allll the way!! @nbcthevoice comes on AGAIN tonight!! #TheVoice #TSoul

TSoul picked out a classic song for his Blind Audition performance. He sang Al Green’s “Take Me to the River” and made it his own. It was obvious that TSoul has a natural feel for soul music and this made both Adam Levine and Blake Shelton turn around. His gospel-inspired version of this song got all the coaches to encourage him and they praised his stage presence. When it came time to picking his coach, TSoul happily joined Team Blake.

Also Read: Hunter Plake Wiki: Everything You Need to Know about “The Voice” Contestant

Taking it Way Back

The Battle Rounds pitted TSoul and Josh Hoyer against each other. They sang another classic, “In the Midnight Hour,” originally sung by Wilson Pickett in 1966. It was a fascinating duel between two fantastic singers, as they sang seamlessly throughout the performance. It was a very difficult decision for Shelton, but in the end, he chose TSoul as the winner, allowing the soft-spoken singer to move on to the Knockout Rounds.

Singing Connects Him to People

TSoul started studying music at a very early age. He was barely five years old when he learned to play the piano. He graduated from high school in Northumberland County and was in the Virginia State University Gospel Chorale. TSoul’s age is just 29, and the choir has given him lots of opportunities that he would not have otherwise had saying, “That choir travels all over the world, so I was able to get the experience of a lifetime with them, but it also showed me the ins and outs of traveling on the road and having a band and a group of people.” As a member of his school’s gospel choir, TSoul has performed all over Europe, including performing for the Pope at the Vatican.

Also Read: Jack Cassidy Wiki: Everything You Need to Know about “The Voice” Contestant

Happy to Be on Team Blake

" When it starts raining it pours, still I'm countin it a blessin…" #BrokenWings @TSoulMusic ? x @malonali

When TSoul is not singing or writing music, he helps his family with their catering business. TSoul likes to share his passion for music with his family and friends, which is obvious when you see the photos on his Instagram account. When asked about his choosing a country singer as his coach, TSoul said, “I’m a country boy from Virginia and those country roots their gonna always be instilled in me. Blake has a knowledge of this show that allowed him to win five or six times now and hopefully, number seven will be happening pretty soon.”

Right now, TSoul is preparing hard for his Knockout Round performance. He will be pit against another good singer on Team Blake, giving one of them the chance to be one step closer to winning The Voice season 12. TSoul has already proved that he is a contender who can make it to the end.