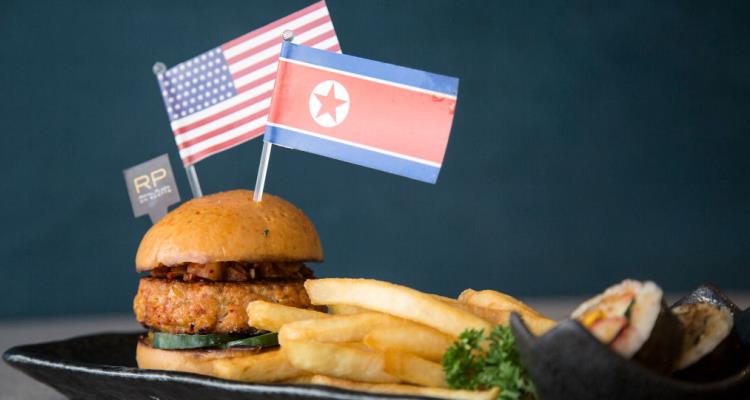 American corporations are salivating now that the Trump-Kim summit has been confirmed for June 12. And why wouldn’t they be? It’s an opportunity like no other, and one that hasn’t been made available until now! The “Peace Summit” (as it is being referred to) is already igniting huge interest from businesses on both sides, as it is the first-ever meeting between a sitting U.S. President and a North Korean leader. Naturally, those from the corporate sector are seeing this as a huge opportunity for growth.

In fact, Stew Leonard’s is already dubbing it the “Trump-Kim Peace Burger Summit.”

And it’s not just Stew Leonard’s’ burger idea that’s making waves! The Donald Trump-Kim Jong-un meeting, which will take place in Singapore on June 12, already has other U.S. companies inspired to launch their own products in unique and imaginative ways. Stew Leonard’s idea is to have Kim Jong-Un “bite into a little piece of America” with a new signature burger made just for the summit. The 10,000 burgers they plan to donate will be hand-made with a new recipe from their Butcher Shoppe’s finest cuts of meat, which will include a mix of their famous filet mignon, short rib, and ground chuck. That’s not all; the burgers will each be stamped with “USA” in the middle of them!

“Fillet mignon is America’s favorite and would be a great way to kick off the country’s new relationship with North Korea,” the company announced.

Known for their boy-and-cow logo, Stew Leonard’s sells over 30 million pounds of beef annually in the tri-state area. The family-owned business was founded in 1923 and has seen the likes of many great American celebrities pass through its doors, including Jerry Seinfeld, Martha Stewart, and even the Late First Lady Barbara Bush.

Nothing says America like a good ol’ fashioned barbecued hamburger, so Stew Leonard’s feels there’s no better way to introduce it to the North Korean market. The question is, what other interesting ways will U.S. businesses be launching their products in North Korea? This “Burger Peace” summit could certainly open many doors for both economies—and this is just the beginning!