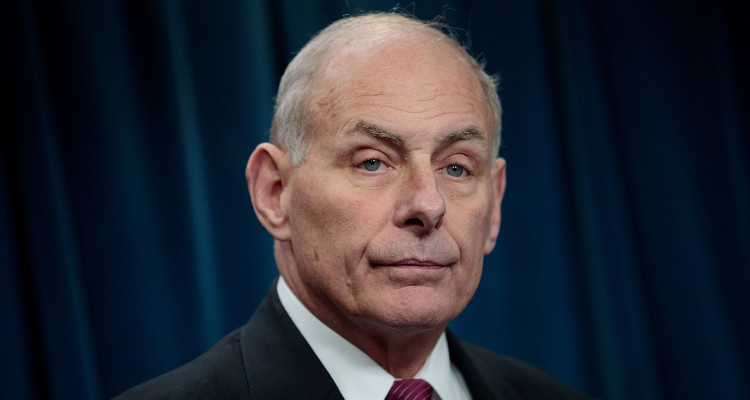 After the sudden dismissal of Anthony Scaramucci, President Donald Trump has appointed retired general, John Kelly to take over as White House Chief of Staff. Who is John Kelly? He succeeds Reince Priebus, who was dragged into a heated tirade by newly-appointed, freshly-ousted Communications Director, Anthony Scaramucci. We’ve got all the details.

There’s never a dull day in the Trump administration! After the resignation of Reince Priebus as White House Chief of Staff last week, the president has tapped in Secretary of Homeland Security, John Kelly to replace him. And Kelly’s first order of business is dealing with Anthony Scaramucci. “The Mooch” created some serious chaos in less than 10 days after being appointed Communications Director, and has already been replaced by John Kelly. The man means business! Political analysts are anticipating what Kelly will do next. Take a look at our John Kelly wiki to know more about the new White House Chief of Staff.

President Trump has always been vocal about appointing military generals to his cabinet, and he’s been doing just that. Boston native John Kelly served in the U.S. Merchant Marine, where his first overseas assignment was taking a freight of 10,000 tons of beer to Vietnam. When his draft number was coming up, he was enlisted in the U.S. Marine Corps in 1970.

Two years later, he was discharged from active duty as a sergeant, and he returned to his studies. He was later commissioned as a second lieutenant after he graduated from the University of Massachusetts and earned a Masters degree in National Security Studies from Georgetown School of Foreign Service.

During his time in the Marines, he also instructed young officers at Quantico. During Operation Desert Storm, he served in the Persian Gulf War. He was promoted to Brigadier General and deployed to Iraq during the war. His last role in the military was overseeing Guantanamo Bay as commander of the U.S. Southern Command until his retirement in 2016. The U.S. Secretary of Defense, James Mattis, and Kelly served in Iraq together. With four decades in the military and a government pension, John Kelly has a net worth of $4.0 million.

His Lost His Son in Combat

Kelly and his wife, Karen Hernest, are parents to three children: Robert, John Jr., and Kathleen. Robert and John followed in their father’s footsteps to the U.S. Marines. Robert was a First Lieutenant when he died while on duty in Afghanistan.

His death made Kelly the highest-ranking military officer to lose a child in Iraq or Afghanistan. John Kelly Jr. is a Marine Corps Major. Kathleen Kelly always wanted to help others and worked with the American Red Cross.

His Wife Honored Her Son’s Memory

Karen Hernest is the daughter of a World War II Marine, who later worked as a policeman. After marrying John Kelly in 1976, she did her bit in helping military families with wounded or deceased soldiers. She also serves as a board member of the Marine Corps Scholarship Foundation.

After her son’s death, the grieving mother set up the First Lieutenant Robert Kelly Memorial Scholarship through the foundation in his honor. “Some people choose to wallow in self-pity,” Karen said, “I chose to do something positive, because I think my son would be very disappointed in me if I didn’t.”

The 67-year-old retired Marine has some strong opinions about administrative policies. While he was the commander of the Southern Command, he has been critical of Barack Obama’s decisions to open combat jobs to women and closing down Guantanamo. He swatted away criticism of inhumane practices in Guantanamo. He also said that the military would be under pressure to “lower standards” for women in combat duty.

He has some political experience as Military Liaison to the U.S. House of Representatives. He was also Senior Military Assistant to the Secretary of Defense in 2011. Kelly is also one of the many supporters of Trump’s hardline immigration policy. Not only is he keen on the travel ban, but he also wants that U.S.-Mexico wall.

There has been some contention over Kelly taking over as White House Chief of Staff. But many believe he’s the firm hand that is needed to bring back order in the White House that has been chaotic recently. Right after he was sworn-in, he got rid of Anthony Scaramucci, who was recently appointed Communications Director.

Since his appointment, Scaramucci went on scandalous expletive-laden tirades against fellow officials and claimed he only answers to President Trump. It is reported that Trump gave Kelly extensive authority and his officials can’t circumvent the Chief of Staff like before. On Kelly’s advice, Scaramucci was fired not only from his position in the White House, but from the administration entirely. Kelly’s new appointment to the West Wing has met with great response from Ivanka Trump and Jared Kushner.