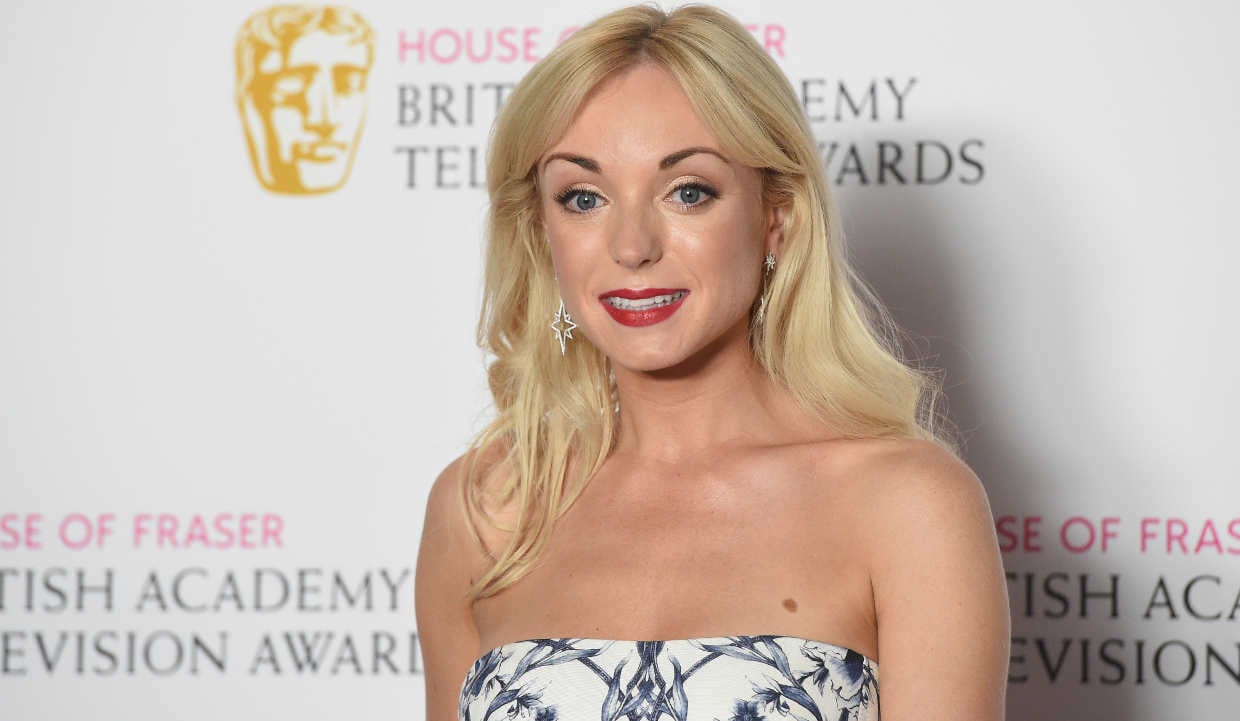 BBC drama Call the Midwife returned to PBS March 25, 2018, and if you’re a fan, we’ve got some exciting news for you. Helen George, who plays the role of Trixie Franklin, has some real-life baby news of her own in this series. Is Helen George pregnant? Don’t continue reading if spoilers are not your thing!

Helen George’s character, Trixie Franklin, is a nurse from BBC One’s period drama, Call the Midwife. She has stolen our hearts with her perfectly coiffed hair and bright red lipstick. Her romance with the town’s handsome vicar also won her many fans.

On the show, Trixie has been busy helping deliver babies. And now, she finally gets to have one of her own! What?

We know what you’re thinking. So, is Trixie from Call the Midwife pregnant?  Is Trixie going to have a baby?

One of the most glamorous nurses on the show, Trixie is a delight to watch. She is outgoing, loves music and dancing, and almost married the town’s vicar!

Trixie loves playing matchmaker, too, and George said, “She relishes trying to set up her fellow midwives with other guys and push them into relationships and get them married off but with a twinkle in her eye. Fundamentally though she’s a midwife, and that’s what she’s there to do.”

Although Trixie has a sunny disposition, the series has also explored her struggle with alcoholism.

In this season, Trixie is seen seeking help in her fight against alcoholism as she tries to get her life back. And that’s where the storyline will be heading in the next few episodes, according to sources.

Our friends across the pond are already privy to the details. But yes, Helen George was pregnant during the filming of the new series.

The producers and cast kept George’s pregnancy a secret for a long time. But they had to tweak the storyline when Helen George’s baby bump couldn’t be hidden anymore.

“I was pregnant in the series, so you just kind of see me walk across the screen sometimes with odd fashions, or I’d sit down a lot, or I’m wearing lots of capes,” George said.

The actress added, “It wasn’t a correct storyline to choose for the character, as well. It wasn’t right for Trixie to be pregnant. So, we just did our best to cover it up.”

The show’s creator, Heidi Thomas, explained that George only took a short break from filming and said, “Helen was able to graciously retire – she just had a couple of episodes off.”

Call the Midwife Baby Is Here

Helen George, along with her partner and Call the Midwife co-star, Jack Ashton (who plays the vicar), welcomed their baby girl, Wren Ivy, in September 2017. The cast members have already nicknamed her the “Call the Midwife baby.”

George and Ashton began dating in April 2016 when they went to South Africa to film the show’s Christmas special.

The actress posted this adorable picture of the family celebrating her baby shower with her new baby girl, who had arrived earlier than expected.

When your baby turns up early for her own baby shower, welcome to the world little one. What an amazing day, we have the best friends ???

There was a Twitter storm back in January 2018. A user commented about George’s weight gain in the series, calling her “massive.”

Sorry if my chins offended you, I chose to feed my baby healthily and not starve myself in a selfish act to look good on tv. Would you say this to a pregnant lady’s face? You should look on pregnant ladies multiple chins with love, they are busy making the future x https://t.co/pWe6T0i6mf

Watch Helen George and the other incredible cast members of Call the Midwife Sundays on PBS.