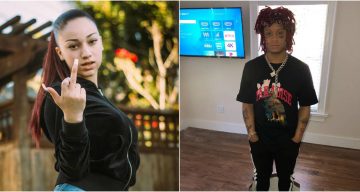 6ix9ine claims Bhad Bhabie and Trippie Redd had sex when she was 13. Credits: Instagram

Rapper Trippie Redd has been taunting his rival Tekashi69 aka Tekashi 6ix9ine for a while, and has now called him a rapist. Tekashi69 has accused Trippie Redd and Danielle Bregoli of having sex when she was just a 13-year-old. Redd denies it, but the whole episode is leaving a bad taste in our mouth. Get the scoop on Trippie Redd’s rape accusations!

The ongoing beef between rappers Trippie Redd and Tekashi 6ix9ine just got nastier. As everybody knows by now, Trippie Redd has been accusing Tekashi69 of being a pedophile for a while now. He has repeatedly mentioned the incident where Tekashi69 was charged with the “Use of a Child in a Sexual Performance”, which reportedly occurred on the night of February 21, 2015.

But Trippie Redd never tires of taunting Tekashi69 with what he has supposedly done with that 13-year-old minor, and just keeps rubbing it in.

The rapper has made rape accusations against Tekashi69 because the girl in question was a minor at that time and having sexual contact with her amounted to a crime. Tekashi69 has always been defensive against this accusation from Trippie Redd.

Tekashi69 Goes for the Jugular

Now, after all this time, it is Tekashi69 who is on the offensive, and Trippie Redd is defending and explaining his position to everybody.

Tekashi69 has now accused Trippie Redd and then-13-year-old Danielle Bregoli aka Bhad Bhabie of hooking up and having sex!

Tekashi69 also posted a video on his Instagram account. He repeated his accusation that Redd and Bregoli had sex when she was just 13 years old, which makes it a criminal offense.

Obviously, it wasn’t long before Redd leaped to his own defense and said that the accusation made by Tekashi69 was totally false. He claims that he did not have sex with Bregoli at all.

Then, Redd went off again with his accusation about how Tekashi69 “raped” a minor, got convicted for it, and there are papers in the legal system that prove it.

Redd said about his supposed affair with Bhad Bhabie, “Me and Danielle was in the studio. She pulled up to the studio. She always been a big fan of me. Saying that we f****d is weird, I don’t know where you got that from.”

Supposed Source of the Accusation

Redd posted another clip where he told everyone where the story of he and Bregoli having sex supposedly came from.

The rapper said, “X [XXXTentacion] told a nigga that weird a** shit, and I know that because the n***a threatened me with a phone call in my DM.”

All in Bad Taste

All this back and forth between these two young and talented emerging rappers is providing great entertainment for those watching it all unfold, but perhaps no one has thought of what it might be doing to Bregoli.

It is indecent and totally uncalled for. Reputations are destroyed, and people get hurt when wild accusations are made about them in such crude manner.

For the sake of decency, we hope that Tekashi69 and Trippie Redd settle their beef in a more dignified manner.

To see Tekashi69 making his accusations against Trippie Redd check out the video below:

Also Read: Tekashi69’s Wiki: A Troubled Rapper on a Meteoric Rise from Obscurity