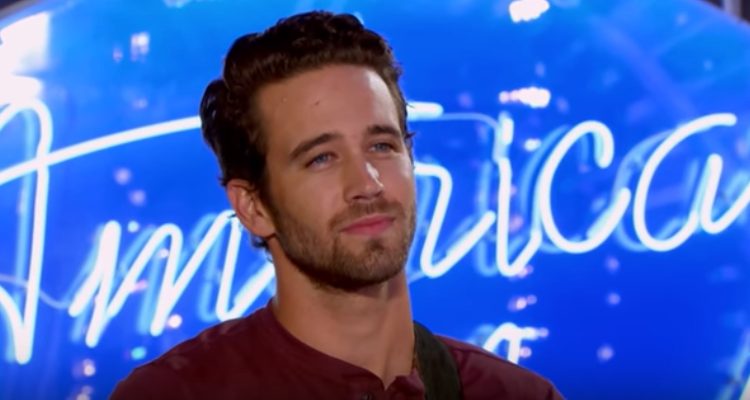 We’re only in the audition phase of the new American Idol and judge Katy Perry, 33, is already crushing hard! Could she really have feelings for a certain guitar-playing contestant?

Here’s what you need to know, along with details from Trevor Holmes’ wiki.

(For the most recent surprising news on AI’s Trevor Holmes, as of April 3, stay tuned to the end of this article!)

Who Is Trevor Holmes?

Trevor Holmes’ age is 27, and he lives in Thousand Oaks, California, according to his American Idol audition.

Like many of the contestants in the past, Holmes has a backstory, and it will either make you cry or warm your heart. While being a musician is his passion, Holmes works in construction as his main source of income. Why?

The American Idol contestant does it so that he can help support his mother, who has been diagnosed with lupus. Are you sobbing yet?

Nothing is more important to Trevor Holmes than family. And, he’s willing to do whatever it takes to look after the most important woman in his life.

According to Holmes, his music is a bit of a blend of the singer/songwriter type of music. He pointed out that if you like Ed Sheeran or John Mayer, then you might like his stuff.

When asked if he put much thought into what he was going to wear to his audition, Holmes quipped, “Well, I was gonna wear my speedo, but I changed my mind last minute.”

In all seriousness, Holmes said that he didn’t want to go in there pretending to be something he’s not, and said, “I just wanted to be me and dress like me.”

Well, being himself certainly caught out attention—and clearly, Katy Perry’s, too!

Also Read: Lionel Richie’s Net Worth in 2018: Just How Rich is the “Richie Rich” of R&B and Soul Music?

Was there a love connection between the “California Girls” singer and the California native?

Well, that’s what it looked like. And co-judges Lionel Richie and Luke Bryan couldn’t help but laugh at her blushing!

We can’t blame them either! Watching one of the most popular singers in the world crush on a contestant is actually pretty funny!

Perry called Holmes “hot” from the moment he started talking. He’s absolutely gorgeous, he sings like an angel, and to top things off, he loves his mom.

The songstress was eating up every single word he spoke, and it was hard not to see past the hearts in her eyes! She also pointed out that “only hot guys are typically named Trevor,” as she giggled and blushed when she repeated his name.

Holmes’ name was hot, his side job was hot, and it was making Katy Perry hot! He called her “Ma’am” out of respect, but Perry wasn’t having it and demanded that he not respect her.

You’re not the only one confused, but it was the pheromones, and they clearly took over. It was even more hilarious to see Perry look up to the sky and say, “Oh, thank you, God!!” (Clearly, for creating such a beautiful man!)

Luke Bryan and Lionel Richie couldn’t help but poke fun at her!

Aside from being hella thirsty for this California dreamboat, Perry did ask Holmes to sing a song (because that’s why he’s really there). Aside from a few pointers, he was given a golden ticket!

Then again, Holmes was always golden as far as Perry was concerned.

Who Is Trevor Holmes’ Girlfriend?

If Katy Perry wasn’t over Orlando Bloom before, she certainly is now. While she was picturing herself as the future Mrs. Katy Holmes, she was caught off guard when he revealed that he had a girlfriend! Plot twist!

So, what does Perry do when she goes to congratulate her newest crush on his audition? She runs the other way when his girlfriend of two years, Sierra Nielsen, comes over! Awkward, right? (Yes, hilariously awkward!)

How does Holmes’ girlfriend feel about the attention of a megastar? She’s surprisingly cool with it!

“I was fully supportive of it. We all have celebrity crushes but it was really funny because when they asked me to run in I was just beelining towards him and I had no idea I cut Katy off,” Nielsen told Good Morning America, describing the moment Holmes found out that he was cleared for the next stage of the competition. “We even laughed about it and I told her we could share him [sic].”

American Idol airs on Mondays and Sundays at 8:00 p.m. EST on ABC.

You can check out the full clip of Katy Perry’s crush below! Hopefully (for our sake and hers), we get to see much more of Trevor Holmes in the competition!

It’s true, Trevor fans. It’s the end of the Idol road for this smooth-talking crooner who stole our hearts (especially Katy Perry’s).

Last night (April 2), the judges had to make the tough decision of narrowing it down to the top 24, and apparently, Trevor just didn’t make the cut. Cue the gasps!

It was a cut fans didn’t see coming, especially since Holmes has been developing himself as an artist for years, sharing his music on social media outlets like Instagram and YouTube. And no one was more upset than Katy Perry, who tearfully (and comically) had to say her final farewell to her Idol man-crush.

But it’s not all bad for this blue-eyed hottie! Since his stint on American Idol, his fan base has immensely increased and the exposure he’s received from appearing on AI has certainly increased his popularity!

So, just because it was a “no” from the judges, doesn’t mean his music career is over! In fact, it may be just the opposite. From Katy Perry fawning over him to thousands of others taking notice of his work, Holmes is already bouncing back from the disappointment of not making it and launching his career all on his own!

Hopefully (for our sake and Katy Perry’s), we get to see much more of Trevor Holmes in the future! (And if he doesn’t have a future in music, we’ll be the first to say he could certainly have a career in modeling!)

Check out this Trevor Holmes original, which has now garnered more than 200K views!