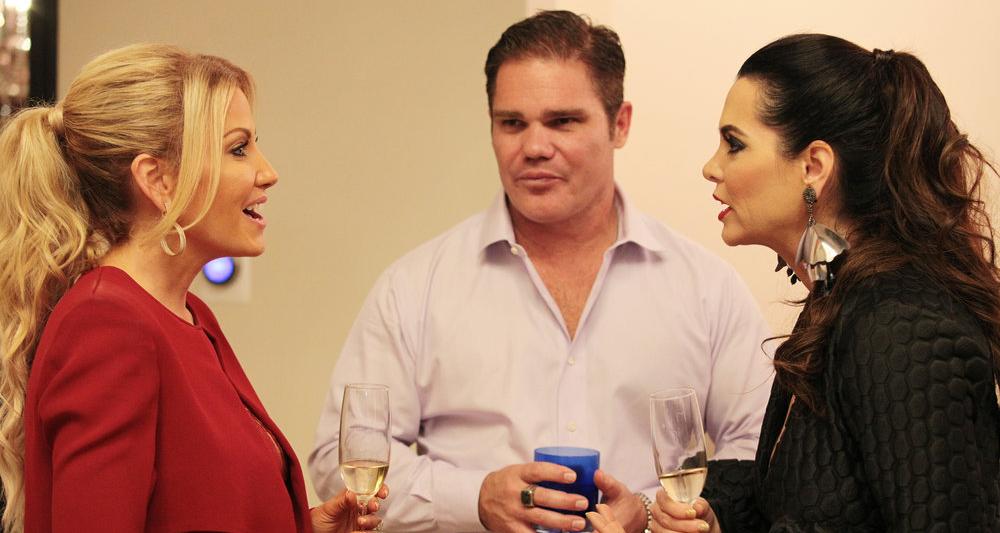 Travis Hollman is the husband of The Real Housewives of Dallas star Stephanie Hollman and the chairman of his company, Hollman, Inc. The company makes fitness lockers, playing courts, and glass walls for games like squash and racquetball, and has innovative policies for its employees and their families. Stephanie Hollman’s husband’s net worth is estimated to be around $18.0 million, and he has ambitious plans to take his company’s sales to over $100.0 million within the next three years! Read on to know more about this rising business tycoon.

The Real Housewives of Dallas, an American reality television series on Bravo TV, is making viewers curious about the spouses of the women who appear in it. One such housewife is Stephanie Hollman, and as she is one of the wealthiest women on the show.

Many want to know more about her wealthy husband, Travis Hollman, as he is often seen on the reality show giving expensive gifts to his wife, so his net worth must be substantial. They specifically want to know about his net worth and how he earned his wealth.

Born on May 4, 1969, in the United States, Travis Hollman’s age is 49. He graduated from Jesuit High School in Portland, Oregon, before completing a degree in business and management from the University of San Diego in California.

He Inherited His Company from His Father

According to sources, Travis Hollman’s net worth is estimated to be around $18.0 million and growing.

Most of the money comes from the business activities of his company, Hollman, Inc., which was founded by his father, Joe Hollman, way back in 1976.

Travis Hollman’s Net Worth Compared to Other Real Housewives Husbands

What Does Travis Hollman Do?

Hollman, Inc. manufactures fitness lockers and creates racquetball and squash courts for clients. The firm makes tournament-tested courts recognized by the American Amateur Racquetball Association and World Squash Federation. These playing courts have been made for colleges and recreational facilities around the world.

The company has a division called Altempco Glass, which creates structural glass wall systems for clients like LA Fitness and Planet Fitness. It specializes in making “view walls” for handball, racquetball, and squash courts.

Hollman, Inc. is making a killing with its glass wall systems because they own a patent that prevents other companies and manufacturers from using similar technology.

Some years ago, Travis Hollman bought an expensive Rolls Royce for his wife. It was the same car that they had rented for their wedding, and he gave it to her as an anniversary present.

He’s also giving Stephanie expensive gifts on a regular basis. He has been known to gift her with presents in the $70,000 range, like it’s just pocket change for him.

The Company Dominates the Market

According to their website, Hollman, Inc. is “the world’s largest manufacturer of wood and laminate lockers” and is the only AWI (Architectural Woodwork Institute)-certified locker company in America.

The company has provided lockers to well over 500 colleges and designed locker rooms for big stadiums like Wrigley Field in Chicago, Illinois.

Enjoying our new boat with the family! Living up these last few weeks of summer with my boys. #RHOD #ProudDad

Hollman, Inc. has built more than two million lockers since starting its operations in 1976. The company’s lockers can be found at nearly all major golf courses in the U.S., as well as in hospitals, corporate centers, and neighborhood gyms.

Some of its clients include Apple, Google, The New York Times, and Goldman Sachs.

Hollman, Inc. is self-funded and has no debt. The company is currently doing $50 million in sales annually, and Hollman plans to double that figure within three years.

Travis Hollman has been overseeing the company since March 2015 and has implemented several positive changes at Hollman, Inc. after his father’s retirement.

For instance, Hollman, Inc. now has a new initiative in which his company will pay for its employees, their spouses, and other dependents to attend North Lake College in Dallas, Texas. This employee benefit program is part of the Hollman HELPs program.

Hollman spoke to the media about this new company initiative and said, “I have people who’ve been working here for 25 years…their kids deserve something, their families deserve this…they’re earning this.”

He Is a Creative Entrepreneur

Before he took charge of Hollman, Inc., Hollman had founded a company called ViB back in 2008. One of its first products was an innovative relaxation drink as opposed to the many energy drinks available in the market. The product struck gold, and the company grew by 252% in 2009 and by 400% in 2011.

ViB, which is an acronym for Vacation in a Bottle, was available in over 4,500 convenience and grocery store retailers in 2011 and 2012.

Hollman made big money with his product and earned a lot of respect for his business acumen and creativity.

Travis Hollman’s Mansion Is Fit for a King

It’s not surprising that Hollman lives in a big mansion in Dallas, Texas, with his wife, Stephanie, and their two sons, Cruz and Chance Hollman.

Hollman recently spent over $1.7 million to make some major renovations to his beautiful and spacious 8,631-square-foot home.

He bought the property at an auction for well below the asking price of $8.2 million and had an indoor swimming pool located right in the middle of their living room. He has now converted the pool into a cozy sitting area for his family to hang out in.

Hollman’s house boasts four bedrooms, six bathrooms, an elevator, a big fireplace, a family room with a wet bar, and a swimming pool in the lakeside backyard. It also has a basketball court, a trampoline, a jacuzzi, a swing, a patio, a steam room, and a hot tub.

The mansion also has a large garage where Hollman keeps his vintage cars collection, which he is very proud of.

A couple cool cars at the house. #rollsroyce #continental #classiccars

He Has Ambitious Plans for the Future

Hollman is an ambitious man and has big plans for his company’s future. He has the responsibility of giving a good life to his immediate family and the many people who work at his company.

With a passion for growth, a mind filled with innovative ideas, and the support of his loving wife and family, Travis Hollman has set his tall sights on an exciting future.