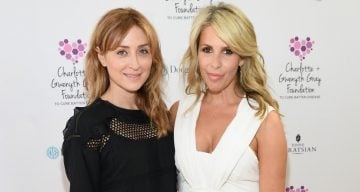 Tracy Tutor Maltas’ casting in Million Dollar Listing: LA season 10 was hailed as long overdue, as she’s the first female realtor to appear on the Bravo show. In her debut season, Tracy struggled to balance work with her marriage life. It all broke down at the end of the season, and Tracy opened up about her divorce from husband, Jason Maltas, in the MDLLA season 11 premiere. Our Tracy Tutor Maltas wiki has everything on this boss babe, from her family to her divorce.

Her Father Is a Millionaire

Tracy Tutor was born on August 11, 1975 and is 43 years old. While Million Dollar Listings has helped raise the profile of her castmates, Tracy already had a thriving career as a real estate broker long before the show.

One of the top brokers at Douglas Elliman, she is able to close deals because she knows the lay of the land from being born and raised in Los Angeles. She also has the real estate business know-how, having been introduced to it when she was young by her father, Ronald Tutor.

Ronald Tutor is a multi-millionaire investor and entrepreneur with an estimated net worth of $790.0 million, according to the latest estimates. He’s the CEO of Tutor-Perini, one of the largest general building contractors in the U.S., and the president of Tutor-Saliba, a heavy civil works construction company.

His father, A.G. Tutor, also worked in real estate. He was the founder of A.G. Tutor Co., a real estate development company established in 1949.

Ronald has been married three times and has a son and three daughters, including Tracy, from his first two marriages. He’s currently married to Alia Tutor, with whom he has no children. Tracy and her siblings have Armenian heritage from their father.

She Graduated from USC

Tracy graduated from the University of Southern California in 1997, with a bachelor’s degree in theater arts. She was also a member of the Kappa Alpha Theta sorority and served as a mentor.

A year after she graduated, Ronald Tutor was elected to the USC board of trustees. He also graduated from USC, with a degree in finance, and had had a long association with his alma mater. He has donated millions to USC and has received multiple honors for his contributions.

She Works for Douglas Elliman

After graduating from USC, Tracy learned the ropes of the real estate industry from her father. After acquiring experience at Tutor-Perini, she joined Sotheby’s International Realty in 2001.

After nine years at Sotheby’s, she worked at brokerages Partners Trust and The Agency in Beverly Hills. She joined Douglas Elliman in 2014 and rose to become one of the top brokers in the real estate brokerage firm.

She mostly specializes in properties in West L.A., like Brentwood, Beverly Hills, and Bel Air. “I am really interested to see where the values go in Brentwood, Santa Monica, and the Palisades. We’ve seen big numbers in the Hollywood Hills and Beverly Hills. I think the next big numbers will be Brentwood,” she said.

Tracy also consulted on the sales of some $400.0 million worth of branded real estate for the Amangiri at Canyon Point, a luxury hotel and resort in Utah. Her network also boasts some of the biggest names in architecture and design.

Several of Tracy’s clients are associated with the entertainment industry. Some of her clients include Edward Norton and Channing Tatum. Rizzoli and Isles star Angie Harmon is one of her closest friends.

Also Read: What Is Josh Flagg’s Net Worth?

She Has Two Daughters

Tracy Tutor was married to Jason Maltas for 13 years and they were together for a total of 17 years. Jason is an L.A.-based residential contractor and president of Gordon Gibson Construction.

They are parents to two girls, Juliet Maltas and Scarlett Maltas. Juliet and Scarlett don’t appear on MDLLA, but Tutor has a few pictures of her girls on her Instagram. Jason has made a few appearances on the show and the girls also get a few mentions.

Deep in #vacation mode…at dinner with my girls ??☀️#dominicanrepublic #springbreak 18

Tracy’s debut season saw her trying to balance a demanding career with her home life. But it wasn’t easy. At one point, she’s on a lunch date with Jason and breaks down in tears when he has to correct her that their daughter is in third grade and not in second.

Tutor has been open in saying that being a working mom can be challenging. “Every career woman who is a mother and a wife struggles with it. It’s in the forefront and it’s what people are talking about in the workforce right now,” she says. “I certainly haven’t mastered it and if someone has, please write the book and show me! If I’m giving 100% to my client on that given day I’m giving, you know, 70% to my family. It’s a constant struggle between the two.”

She and Her Husband Have Divorced

Shortly after giving viewers a peak into her struggles on MDLLA, Tracy announced that she her husband were getting a divorce after 13 years of marriage. They cited irreconcilable differences in the court documents, while many believe their divorce is due to their demanding careers.

Their split appears to be amicable with no drama. Tutor and Maltas have agreed on joint custody for their daughters and are on good terms in the spirit of coparenting. They also agreed not to let their kids appear on MDLLA.

They had signed a prenuptial agreement that divided their assets equally, and neither requested spousal or child support. According to the divorce settlement, Tracy got to keep their $18.0 million home, the Cadillac Escalade, and the Range Rover. She will also have to pay for their daughter’s equestrian classes and the nanny’s expenses.

In the season 11 premiere, Tracy confessed that the hardest part of the divorce is not getting enough time with her kids. “It’s been a difficult time, but the hardest part is that I don’t see my girls every day because we share custody,” she said, adding, “When I don’t have my kids, I try to focus much more on work and friends. And when my kids are with me, I’m laser-focused on them.”

Tracy is also hopeful for her future, both professionally and personally. Check out how Tracy Tutor navigates through her newly single life and work on Million Dollar Listings: Los Angeles, Thursdays at 9:00 p.m. EST, only on Bravo.