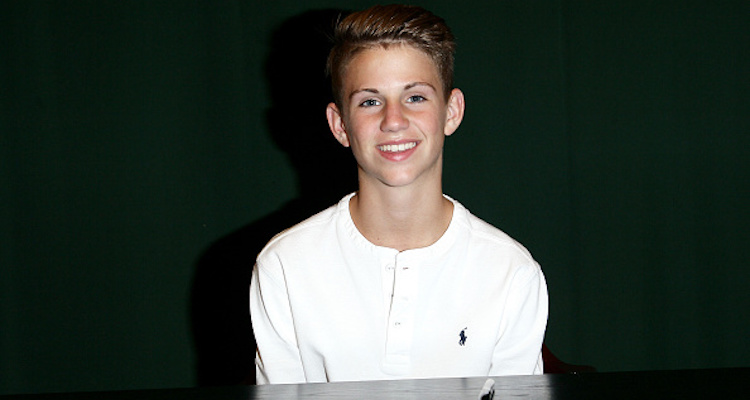 Have you earned the necklace yet? You may not have this week, but don’t worry because there’s always next week to get the must-have badge of honor! This week, the best YouTubers were young men we chose for their best YouTube videos, and obviously their ability to wow us with their talent. Matty B., Tanner Fox, and Brent Rivera were the top three and we are going to explain why they are the best YouTubers in 2017, so far.

Stars today aren’t found on the streets or in auditions anymore, they’re found on the Internet. With nothing more than an idea and a phone, anyone can become the next sensation, reaching millions of people and building a large fan following. Everyone wishes they could do it and now everyone is trying to, but it’s harder than it looks. For one, you have to be comfortable on camera and, once you’ve mastered that, you have to give people a reason to follow you on a daily to weekly basis, and get them to subscribe! Media has changed drastically over the years and now it’s possible for anyone of any age to be an Internet star. The most watched YouTube video could be as simple as your cat playing with you! Once you’re consistent, you start to gain a loyal following, and if you’re lucky, people start to take notice.

It wasn’t easy choosing our top picks this week, but that doesn’t mean you can’t win next time. With multiple categories, anyone can earn their necklace and share the news with their friends. The great thing about being a social media personality is that it opens you up to more opportunities and allows you to meet other stars, including the same ones that walk the best red carpets in the world. We’re giving you the top three, starting backwards from third to first place.

At just 19 years old, the talented comedian is taking Los Angeles by storm and has already seen more celebrities at his age than most regular people get to in a lifetime! He’s barely legal, but he’s old enough to turn his talent into a job, with some of the best perks. With 2.7 million YouTube subscribers, Rivera is able to reach the equivalent of a major city, and that reach has allowed him to make the right connections. Last year, Rivera partnered with clothing brand, Hollister as part of their anti-bullying “All Equal” campaign.

“This partnership with Hollister allows me the opportunity to help spread much needed awareness around bullying and cyber bullying, something I have actually dealt with on my personal social channels,” Rivera, who goes by MrBrent98, tells Stylish exclusively. “I am hopeful that the content I have created in collaboration with Hollister will resonate with my fans and teens around the world.”

He added: “For me, when I started making videos online, I was getting a lot of comments in person and online about being weird, and that’s being bullied,” Rivera said. “But I stayed strong and stayed positive, and over time, my videos caught on.”

He’s already starred in Alexander IRL with Black-ish star, Marcus Scribner and has made appearances on red carpets such as the Kids’ Choice Awards.

Reunited with my brother @eljuanpazurita ?????

Is it just us or are the stars getting younger by the minute? Fox, a professional scooter rider and entrepreneur, may only be 17 years old, but he’s managed to gain himself 4.4 million followers on YouTube! He’s made some of the best YouTube videos in 2017 and they year isn’t even half way over yet! He even has his own brand and web site called “TFox,” where he sells clothing, swag and scooter-related products. Did we mention that some of the best stuff is sold out already? He’s not only young but ambitious, and the right people have started to take notice.

Earlier this month, Fox revealed a secret he had been keeping from his fans: he has a girlfriend named Taylor! Expect to see more of her on his Instagram account and in his videos.

In first place is Matthew Morris, commonly known as MattyB, and he has a whopping 8.2 million subscribers! He’s an artist known for posting remix videos of popular music on YouTube, and fans simply can’t get enough. The 14-year-old Georgia native has made appearances on The Wendy Williams Show, Today, Dr.Phil, and more. He could very well be the next Justin Bieber, who also got on his road to fame the same way! His covers are some the highest rated and most watched videos on YouTube, and we can see why. It won’t be long before he finds himself featured on tour with some of the biggest stars, or headlining his very own someday! Keep an eye out for this one!