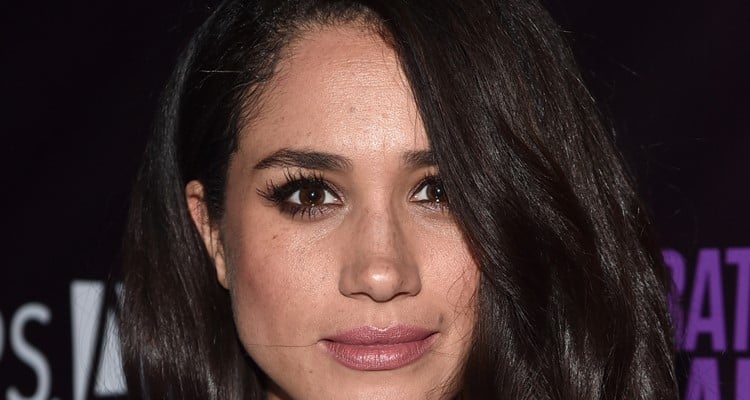 Meghan Markle is reportedly Prince Harry’s new girlfriend, though, neither party has confirmed their relationship as of yet. Since then, people want to know more about the celebrity who might be connected to the royal family.

Meghan Markle is an actress, model, humanitarian, and most recently, Prince Harry’s rumored girlfriend! Ever since news reports surfaced on October 30 that the Suits star is possibly dating the British Royal, people are dying to know more about Meghan Markle! The two reportedly bonded over their shared interests in humanitarian causes, with Markle making numerous trips to the United Kingdom in the past few months. Since the news broke, people can’t enough of Markle! They want to see the beauty that might have captivated Prince Harry. Here are the top 10 photos of the beautiful Meghan Markle.

Markle flaunted her toned legs in tailored shorts with a matching suit jacket and black heels, at the 25 year celebration of P.S. ARTS. She looks absolutely divine against the angel wings painting in the gallery. 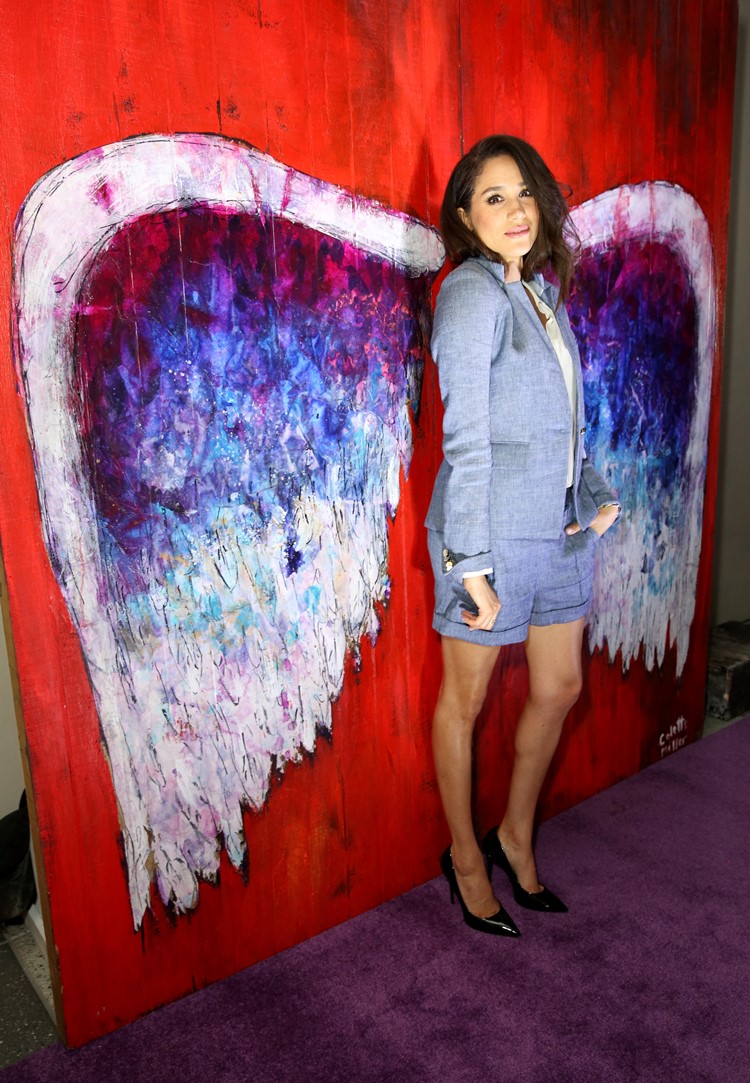 #2. College Women of The Year

The 35-year-old rocked the bohemian-chic look in a pale blue lace dress with a black belt at the Glamour and L’Oreal Paris event to celebrate 2016’s College Women of the Year. 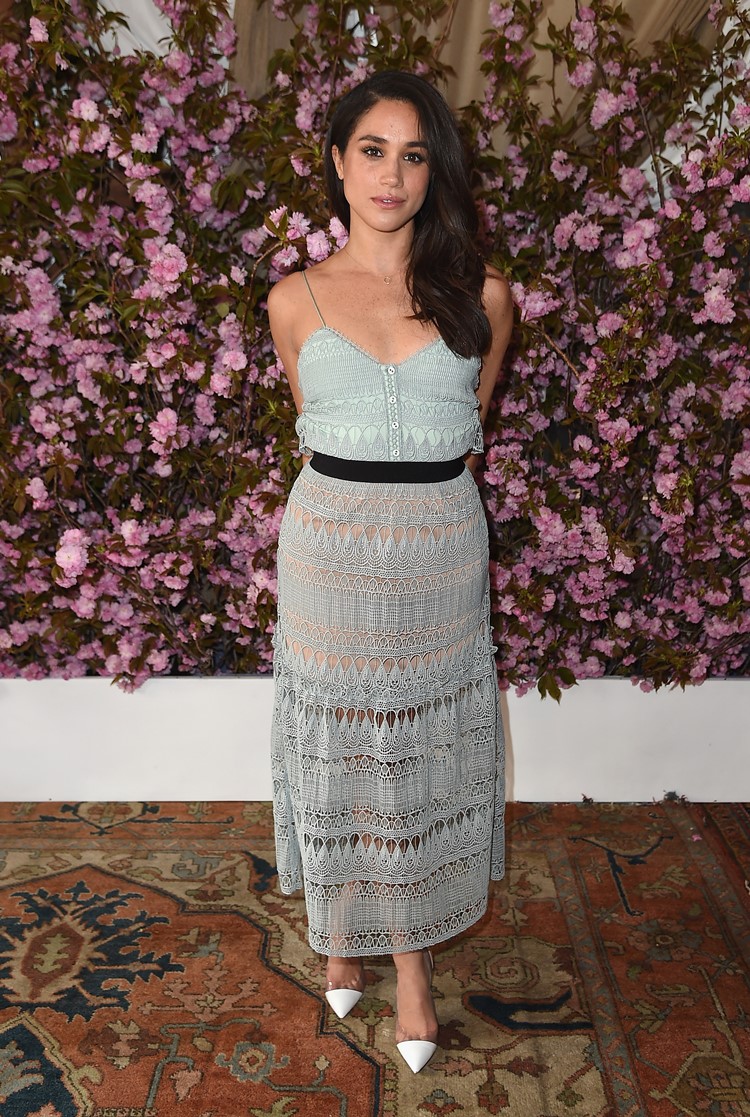 Markle was a captivating lady in red at the ELLE’s 6th Annual Women in Television Dinner. The velvety wine-colored dress was accessorized with a metallic clutch and a pair of black tie-up pumps. 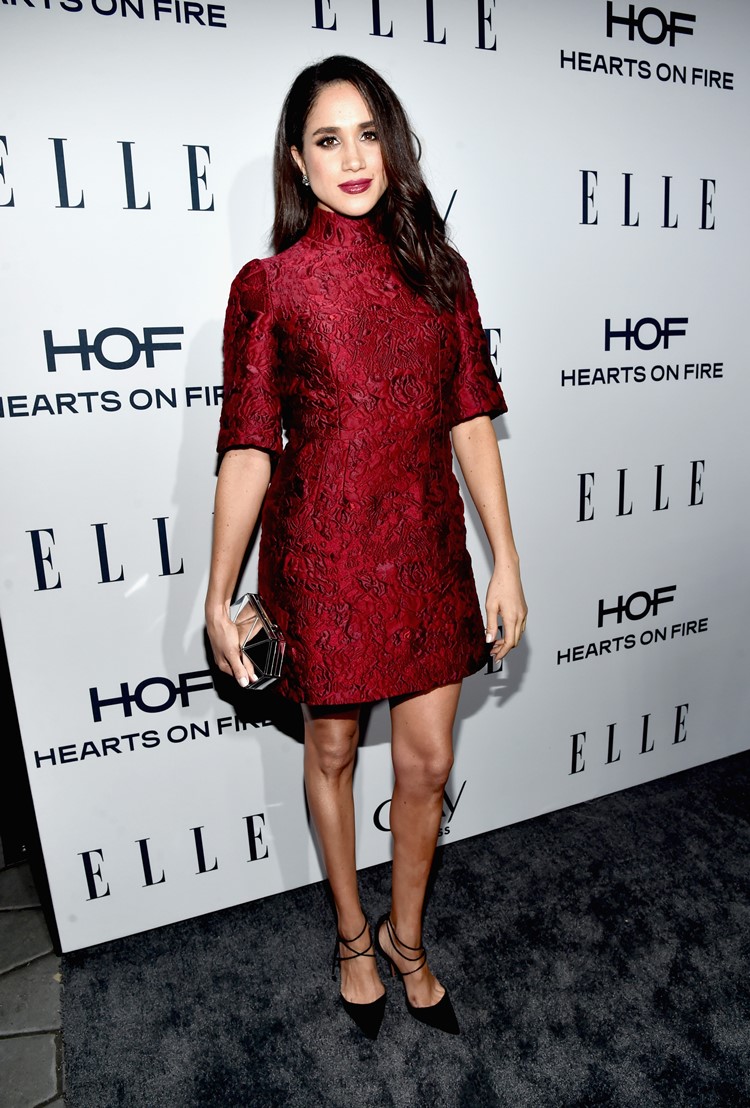 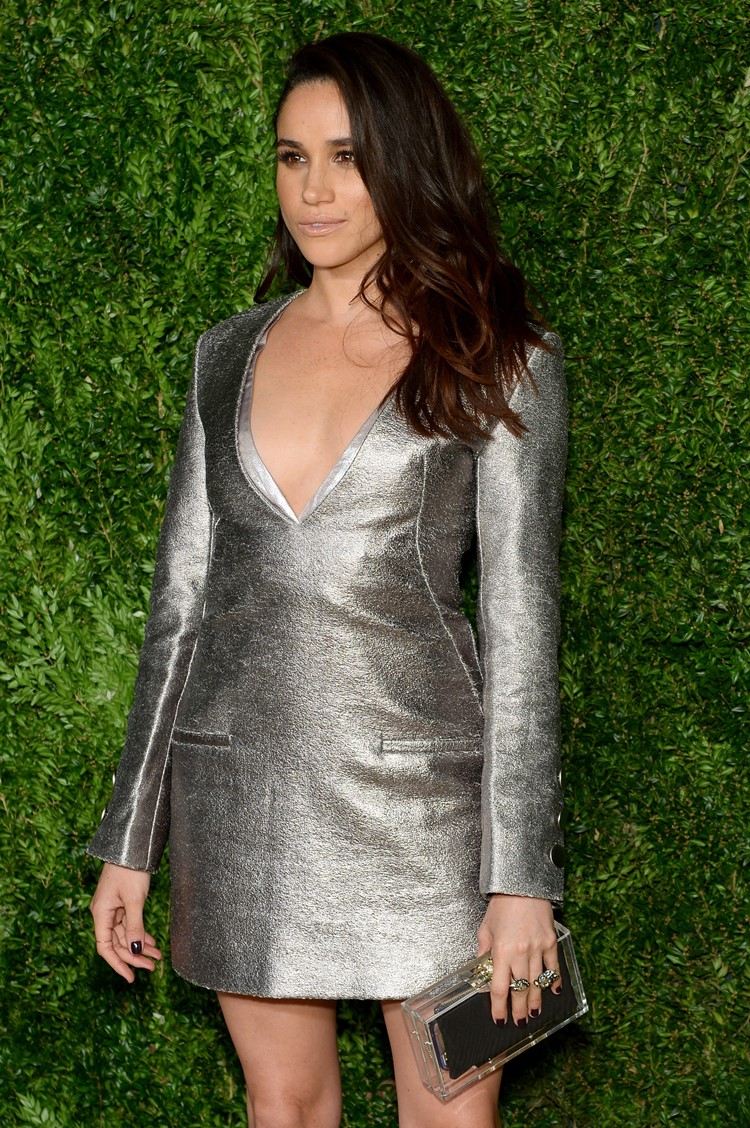 Meghan Markle was a vision in white at NBC’s New York Summer Press Day! The sheer white top was complemented with long loose trousers with a draped waistline.

You can never go wrong with a Little Black Dress! Markle’s figure-hugging black number at the UJA-Federation of New York’s Entertainment Division Signature Gala had an added pop of color with embellished teal pumps.

Markle looked stylish at the NBC Universal Cable Entertainment Group Upfront party in a black and pink strapless ensemble, complimented with a black flowered pattern under the pink net fabric. 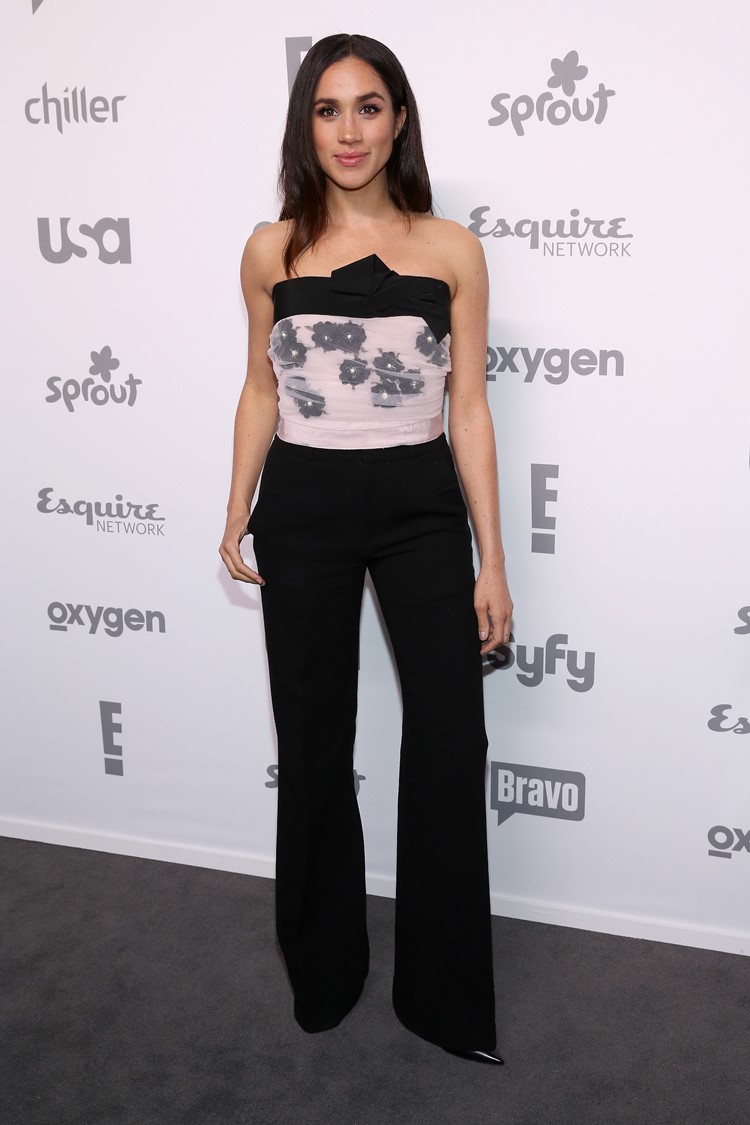 Markle was front row in a black crop top and sheer black skirt at the Misha Nonoo show during Mercedes-Benz Fashion Week. 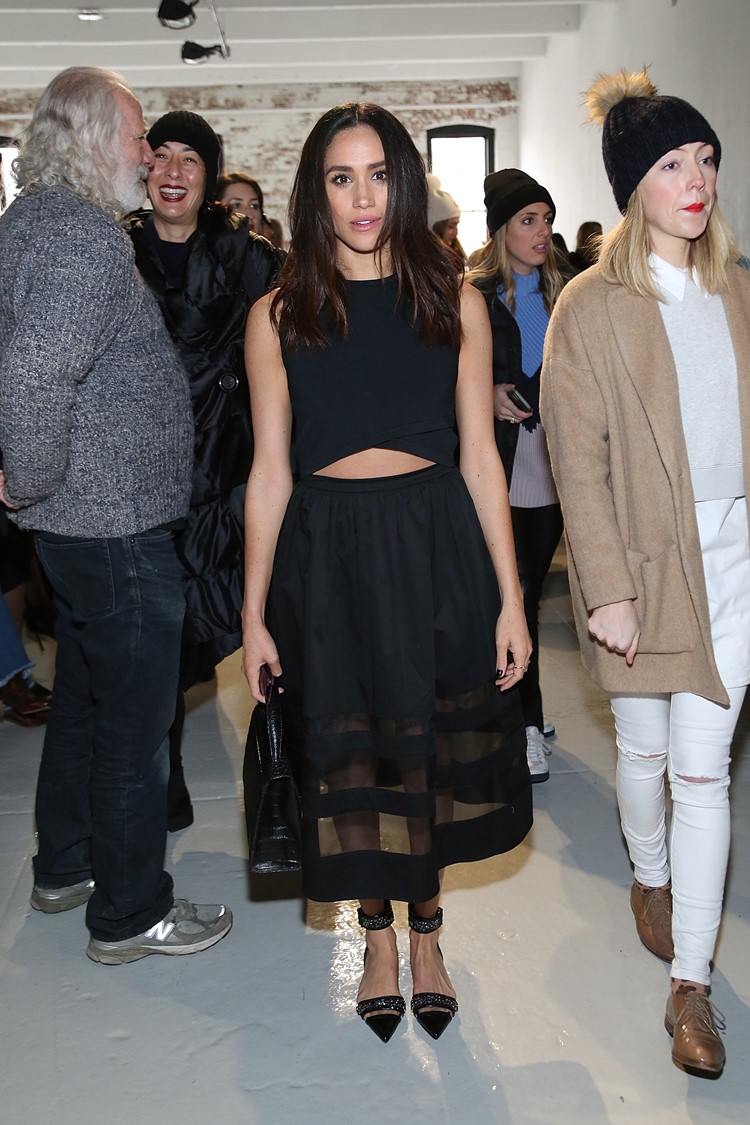 The World Vision Global Ambassador was a statuesque beauty at the Elton John AIDS Foundation’s Enduring Vision Benefit. She stunned in a blue mermaid dress that hugged her curves in all the right places! 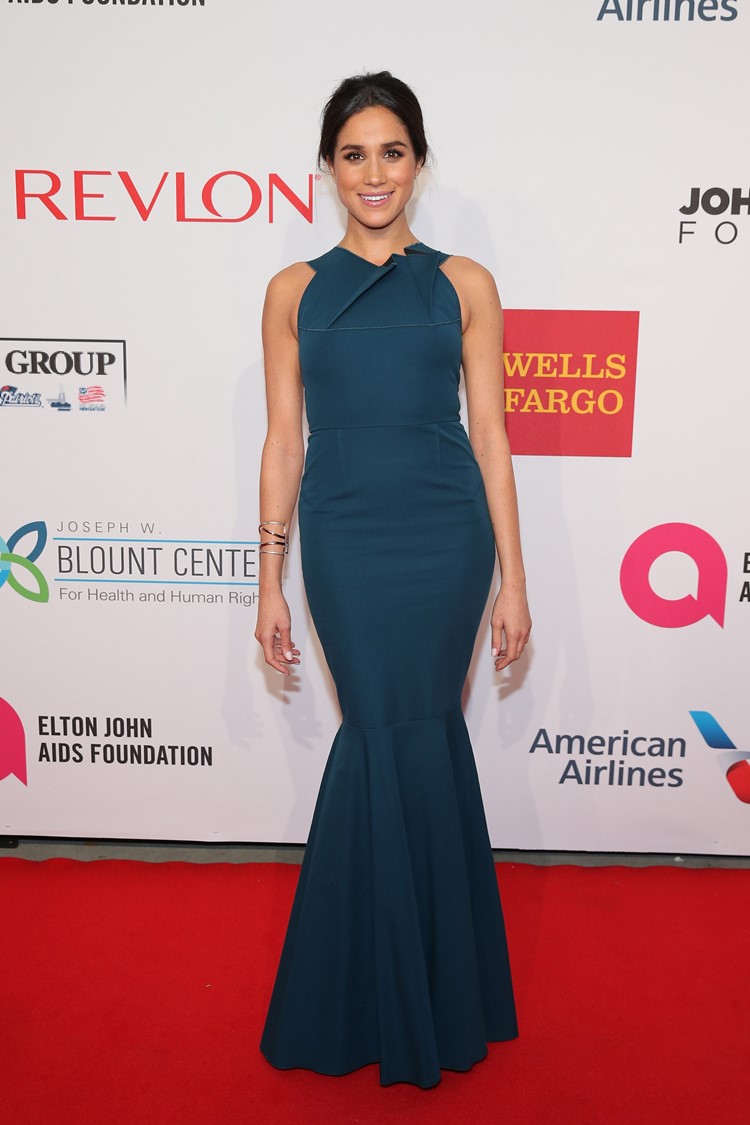 The actress channeled an understated look at the Peter Som show during MADE Fashion Week. she rocked a silky striped crop top with a black flowing skirt, accessorized with a white clutch and beige pumps.