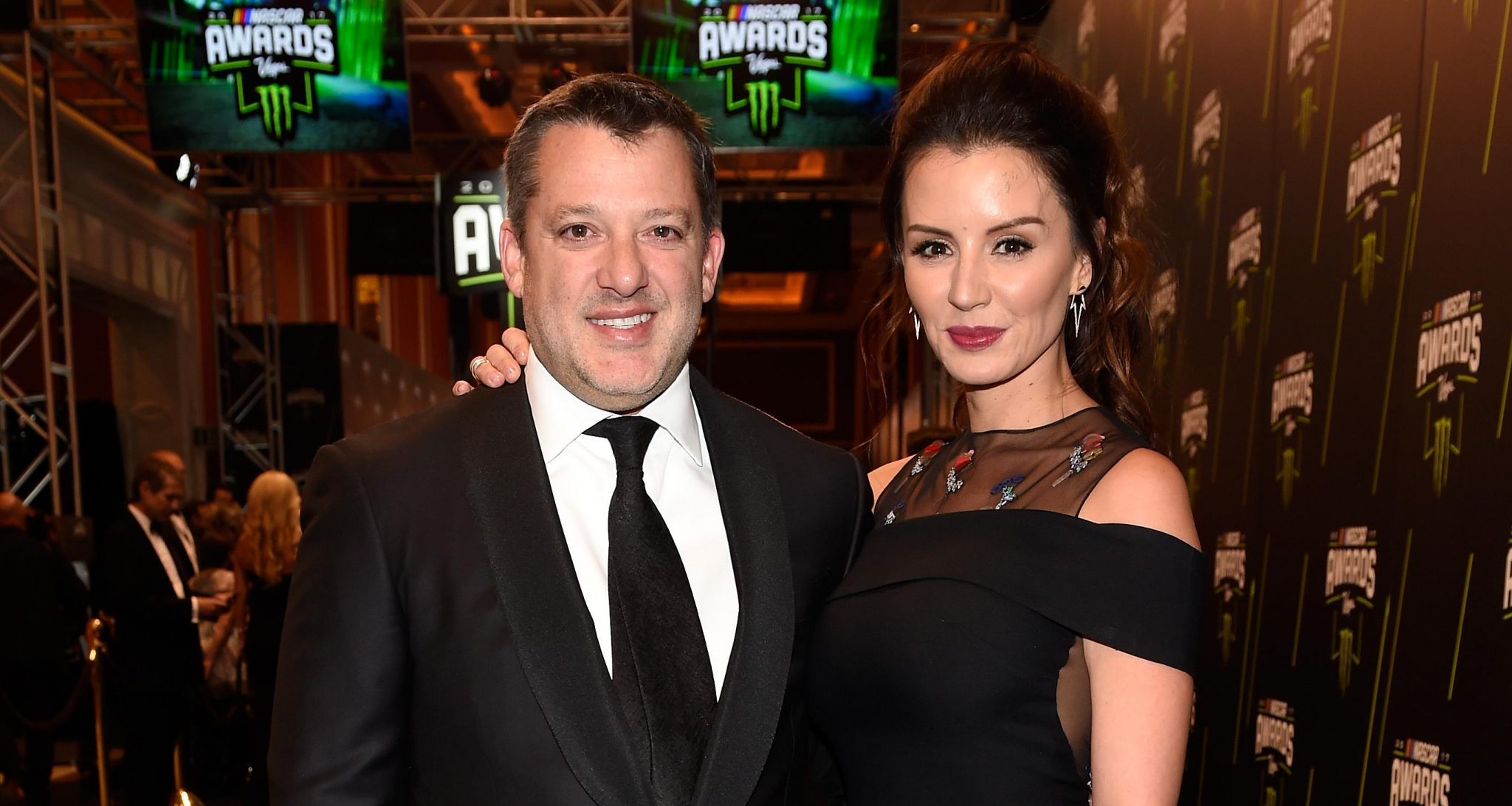 NASCAR racer Tony “Smoke” Stewart notoriously claimed he’d never get married but has since waved the green flag on wedding preparations! Stewart got engaged on Thanksgiving Day 2017. We turn the spotlight on Tony Stewart’s girlfriend with details from Pennelope Jimenez’s wiki.

Tony Stewart no longer sits behind the wheel but, instead, leads a racing team as co-owner of Stewart-Haas Racing. He recently took up cycling and has visibly shed a few pounds. But these aren’t the only changes in Stewart’s life.

He once appeared on The Dan Patrick Show where the host asked him if he was ever going to get married.

Stewart gave a clear answer and said, “No! Who told you that? I’ve made it 46 years!”

But in 2016, Stewart met Jimenez, and they got engaged on Thanksgiving 2017! He announced the engagement by sharing a picture of the massive sparkler he proposed with on his Instagram.

Even Dale Earnhardt Jr. couldn’t contain his surprise that Stewart is settling down.

The couple doesn’t have a wedding date in sight, but it appears the wedding preparations are on for a grand celebration.

Her Family Moved from Mexico to California

Born in San Diego on July 26, 1978, Pennelope Jimenez turns 40 this month. She is of Mexican descent and has spent the better part of her childhood in different places. Her family is primarily from Ensenada, Mexico.

“I lived there for a few years and then moved to Mexico City just before the big earthquake. I lived in Garden Grove, California, for three years and then went to junior high and high school in Corona before settling in Huntington Beach,” said Jimenez.

She’s currently bristling in the heat wave in California and made a trip to the pool to escape.
Not only has Jimenez lived in different locations, but she also has an exquisitely mixed heritage, which confuses even her.

“My father’s family is Spanish, but they moved to Baja to create a new family. My mom’s mom is French, and we think her father is a true Mexican. My dad thinks he has a little Filipino in him, but he’s not his dad, so what does my father know? It confuses the hell out of me.”

Nonetheless, she gushed on Instagram that Stewart adores her family and she can’t wait to share her heritage with him.

Nothing makes me happier than being with my family…. No matter what he says they love ME more!!!! @tsrsmoke #family

She Was a Playboy Playmate in 2003

After graduating from high school in Corona, California, Jimenez settled in Huntington Beach. There, she got a jump start in her modeling career by appearing in the controversial “Cheerleader” TV commercials for XFL football league.

Playboy models Karen McDougal and Rachel Sterling were the stars of the XFL commercial. McDougal encouraged Jimenez to try out for the magazine, and it was the best advice she got.

Not only did Jimenez become a Playboy model, but she was also named “Playmate of the Month” in March 2003. She appeared in a series of Playboy videos and featured in a calendar.

In 2007, she even teamed up with Deanna Brooks and Serria Tawan to publish a book, The Bunny Book: How to Walk, Talk, Tease, and Please Like a Playboy Bunny.

Like many other Playmates, Jimenez expressed her grief when Playboy mogul Hugh Hefner passed away in September 2017.

In a Playboy interview, Jimenez listed the specifics of what she wanted in her dream man. It’s your everyday “tall, fit, caring, and likes to cuddle” type.

But she also wants someone who wears sweats at home, orders a pizza with ranch dressing, and watches a movie on a Friday night. We hope Stewart took note.

She Had an Acting Career

During her modeling days, Jimenez appeared in an episode of The Bold and The Beautiful and modeled for Drew Carey’s game show, The Price Is Right. She played a character for a UFC Xbox game, modeled for Jose Cuervo, and did a commercial for a James Bond video game where a laser blasts off her skirt.

“For some reason they always want me to take off my clothes,” Jimenez quipped.

And, it wasn’t far from the truth. Jimenez did several skits on Spy TV. And one, in particular, had her stripping one too many times.

“In one scene, I was on a boat taking off my clothes and asking married couples to take my picture. The wives got mad of course, but it was all supposed to be funny. I really love comedy,” said Jimenez.

Jimenez’s stint for Spy TV made her realize her ambition to work in movies and said, “I wouldn’t mind being a big movie star. Then I could buy a house by the water. I just don’t know where I want to live yet.”

With her former manager’s encouragement, Jimenez tried out for The Scorpion King, the movie that launched Dwayne Johnson’s acting career. She got the opportunity to get up close and personal with The Rock as a harem girl who promises to make all his dreams come true. But, her nerves got the better of her while filming.
“Unfortunately, I didn’t get to follow through on that. It was my first movie, and I thought I was going to throw up on the set. When I get nervous, I yawn a lot because it keeps me from freaking out. So the director talked to me and asked, ‘Am I boring you?’ I had to run to the bathroom and give myself a pep talk. I said, ‘What am I doing? I have four lines in this movie and I’m freaking out!’”

These days, the former Playmate is doing her bit for underprivileged kids through the Tony Stewart Foundation.