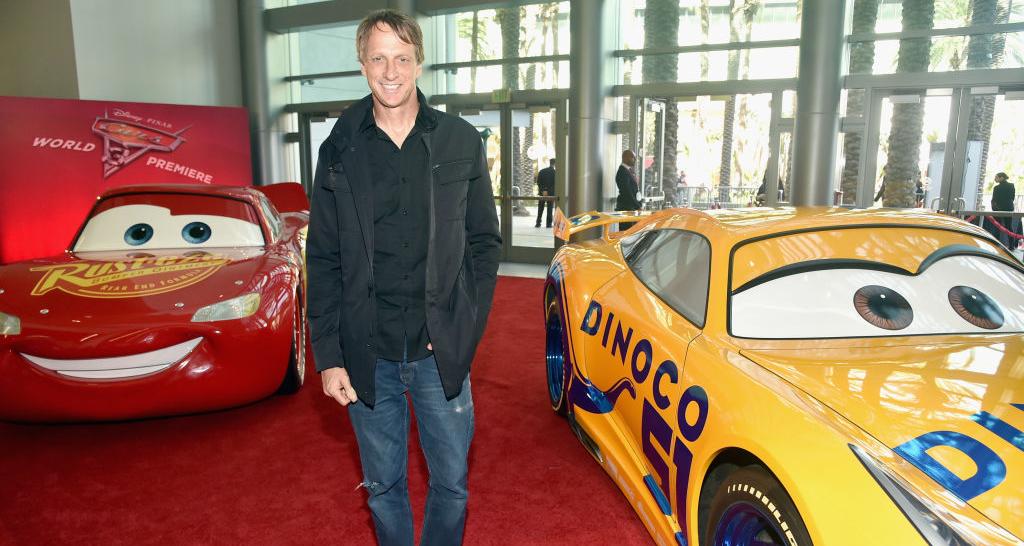 Simply put, Tony Hawk is one of the greatest skateboarders ever. He is an inspiration to several generations of kids as they try their best to emulate him and his mind-boggling stunts on the skateboard. Hawk also has a sharp nose for business and has his own company called Birdhouse. Tony Hawk’s estimated net worth in 2018 is estimated around $140.0 million. He is using a big part of that money to popularize the sport of skateboarding all over the world.

Any kid who ever rode a skateboard had dreams of becoming as good as Tony Hawk. He is a legendary American professional skateboarder, who is also the owner of his own skateboard company called Birdhouse.

Even though his real name is Anthony Frank Hawk, he is popularly known by his nickname, The Birdman. He is widely respected and admired as one of the most influential and successful innovators of modern vertical skateboarding.

Over the years, Hawk has built a fortune for himself thanks to his undisputed expertise in skateboarding. His money comes from his many championships wins, the earnings of his company Birdhouse, his licensed video games titles, his skateboarding exhibitions and tours, and his numerous appearances in films and other media.

It’s no wonder that Tony Hawk’s estimated net worth is a grand $140.0 million and growing, as he continues to push the envelope with his skateboarding and business ventures.

A Passion for Skateboarding

Hawk was born on May 12, 1968, in Carlsbad, California to his parents Nancy and Frank Hawk, which makes Tony Hawk’s age 49. As a child, Hawk was hyperactive and when he was tested, it turned out that he had a high IQ of 144!

Tony Hawk was just nine years old when his older brother handed him a used blue fiberglass skateboard on which Hawk stepped and rolled down an alley behind the family’s home in San Diego.

Nobody knew back then that this little kid would go on to become the most famous skateboarder of all time. Hawk practiced regularly and soon developed a passion for skateboarding.

Hawk’s parents were glad when he took up skateboarding seriously, as it became an outlet for his excessive energy. Turns out, he was really good at it! So good, that Hawk became a professional skateboarder at the young age of 14!

At the age of 12 years he had won amateur contests all across California, and by the time he was 16 years old he was regarded as the best competitive skateboarder in the world! 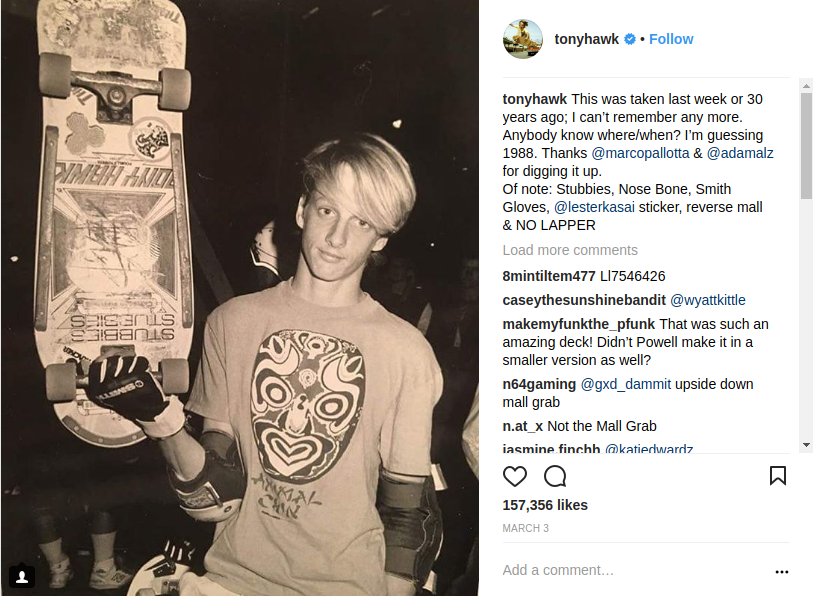 Tony Hawk Holding a Skateboard When He Was Young Credits: Instagram/tonyhawk

So, his lifelong passion for skateboarding continued. And not surprisingly, Hawk became the National Skateboard Association world champion for 12 consecutive years.

Hawk became well known for his daredevilry in skateboarding. He tried doing stunts that had never been done before, including becoming the first skater ever to complete a “900.”

It is a stunt in which the skater completes two-and-a-half mid-air revolutions on a skateboard and lands successfully.

Starting His Own Company

Being exceptionally smart, Hawk soon realized that there were many commercial opportunities in the field of skateboarding to also put his brains to good use. To tap those opportunities, he and a partner started a skateboard company called Birdhouse Skateboards in 1992. 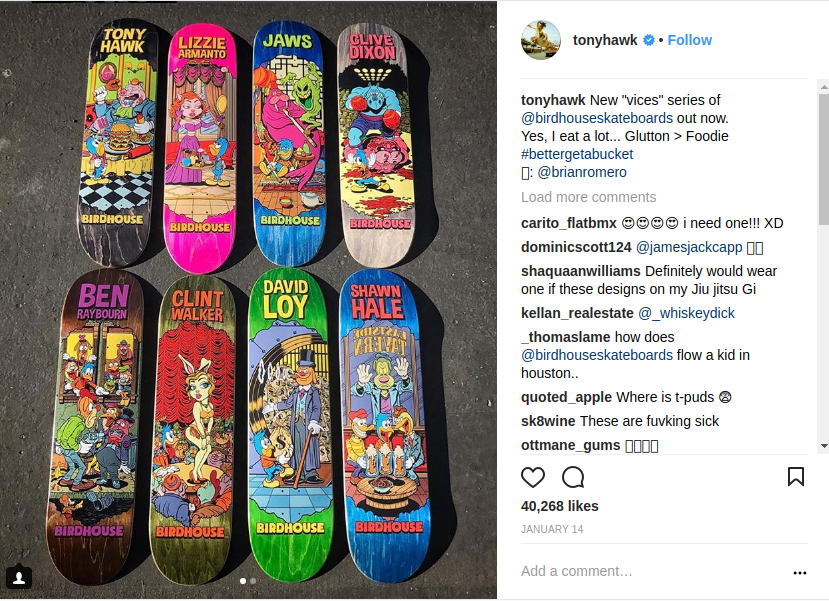 The company makes skateboard decks and wheels, T-shirts, sweatshirts, hoodies, DVDs, and accessories. Their products are reasonably priced to make sure that even kids and adults from low-income families can buy their gear from Birdhouse.

Once Hawk established himself as the leading pioneer in skateboarding, he also became obsessed with the idea of popularizing the sport all over the world.

To that end, Hawk started a show tour called Boom Boom HuckJam in 2002, which featured freestyle motocross, skateboarding, and BMX.

This extreme sports exhibition and tour was launched in Las Vegas, Nevada. It later expanded to cover 31 cities around the U.S. and in Six Flags amusement parks.

Given his increasing popularity, the move to create skateboarding video games endorsed by Hawk was a logical step.

Activision developed and launched the first game of the series titled Tony Hawk’s Pro Skater in 1999. It was met with great success. 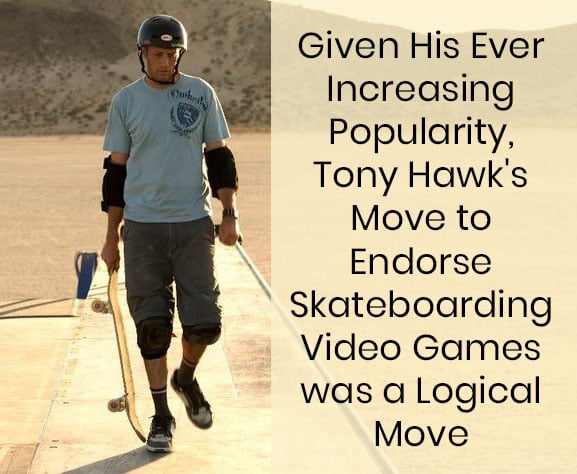 They later launched more titles in this franchise like Pro Skater 1, 2, 3, and 4, American Wasteland, and Underground 1 and 2.

Tony Hawk’s video series became one of the best-selling video game franchises of the 2000s. And there were subsequent releases of games like Project 8 and Proving Ground and has grossed over $1.2 billion in sales since it’s launch.

He appears in some of these games in this franchise, as well.

Welcome to the Tony Hawk Experience

To take advantage of Hawk’s popularity, a series of amusement park rides called Tony Hawk’s Big Spin were built in three Six Flags parks in 2007 and 2008.

It was initially called the “Tony Hawk Experience” and was made to look like a big red-and-black skate park. It gave the riders an “extreme sports” experience, with monitors and a big spinning Tony Hawk figure topping the ride.

In January 2012, Tony Hawk’s YouTube channel called the RIDE Channel was launched. It showcases several successful musicians, artists, and people from different backgrounds who have been inspired by skating.

It includes a program called Tony’s Strange Life in which Hawk interviews people from all walks of life, appears in skits, and skateboards in unlikely places like the floor of the New York Stock Exchange (NYSE).

A Sharp Eye for Profit

Hawk started out by investing in mutual funds and stocks, but later became more ambitious and started investing in start-ups. He knows a good idea when he sees one, which is why he has invested his own money in several companies. 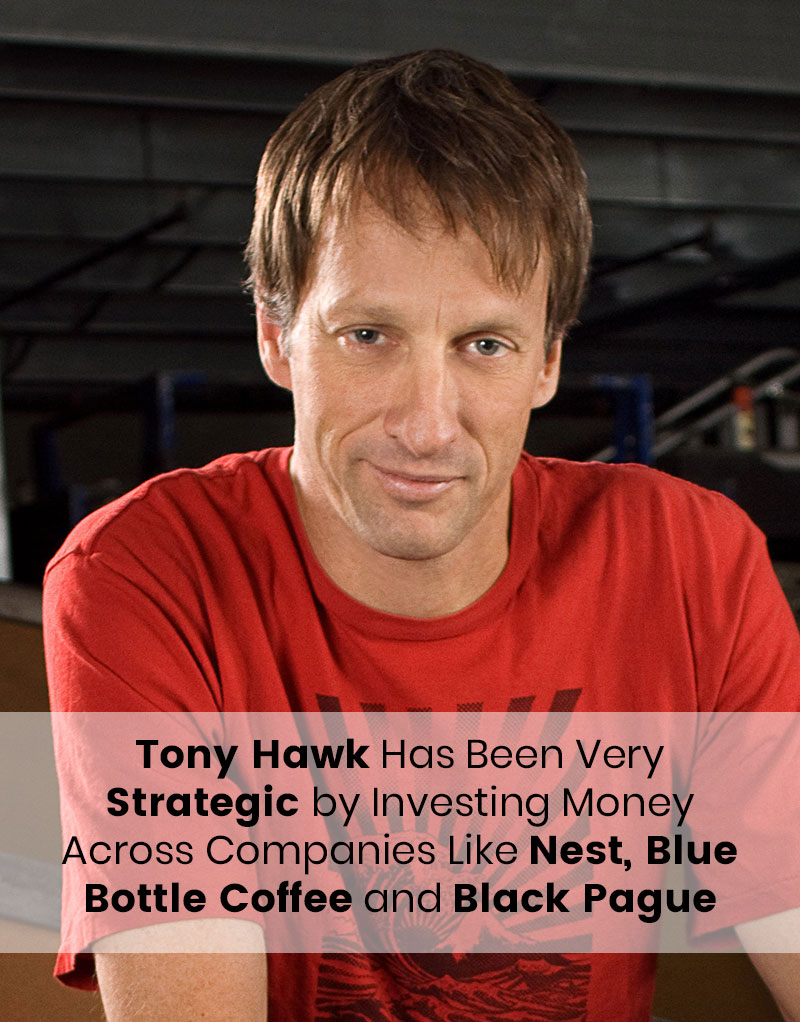 He invested early on in Nest (the Internet-enabled thermostat maker), which was later bought by Google for $3.2 billion in 2014.

The entrepreneur has invested in Blue Bottle Coffee and a brewery called Black Plague in San Diego, California. He has also invested in tech companies like DocuSign.

When Hawk was just a 17-year-old high school senior, his annual income was more than that of his teachers. This was mainly because of royalties from his primary sponsor, Powell Peralta skateboards. It was a glimpse of things to come when he would be an adult.

Hawk has been sponsored by several brands like Theeve, Lakai Footwear, Bones, Independent, and Nixon. He has also partnered with companies like Activision, Quiksilver, Sirius, and T-Mobile, and has endorsed their products. 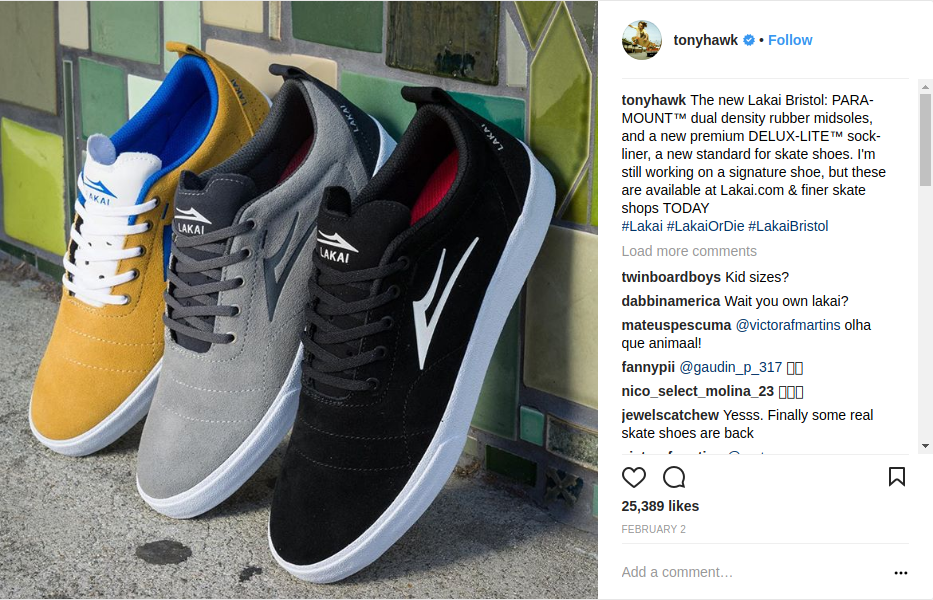 His street credibility, his American wholesomeness, his undeniable genius for skateboarding, and his integrity make him a favorite with teens, the biggest consumers in the skateboarding market.

Some of his corporate sponsors have been world famous brands like Jeep, McDonald’s, Hershey’s chocolate milk, and Frito Lay snacks. He had reportedly signed deals with them for $1.0 million each.

Hawk has become so famous that he has entered the pop culture of the times. He has earned a considerable amount of money by appearing in movies since the mid-1980s including:

Hawk has also appeared in TV series such as:

The pro skateboarder has his own home in Southern California, where he lives with his wife and children. Even though he’s pushing 50, he still practices his skateboarding as much as he can.

Tony Hawk’s house covers an area of 3,800 square feet and has four bedrooms, three bathrooms, a family room containing an entertainment center, a swimming pool, a Jacuzzi, a barbecue place, a big driveway to house his cars, a guest house, and of course, a full skate park. (After all, Hawk’s son Riley followed in his dad’s footsteps and became an avid skateboarder himself!)

Even though Hawk lives in California, he bought a house in Detroit, Michigan in 2016, because his wife hails from there and they wanted to be able to visit relatives occasionally.

The property is a three-unit apartment building in the Woodbridge neighborhood in Detroit and is about 120 years old.

Whenever Hawk and his family go to Detroit, they stay in one of the 1,200-square-foot units while the other two have been leased. He also chose this building because he wanted to invest in Detroit.

Tony Hawk’s wife is named Kathy Goodman, and she is his fourth wife. They were married in a ceremony on June 28, 2015, in Limerick, Ireland. 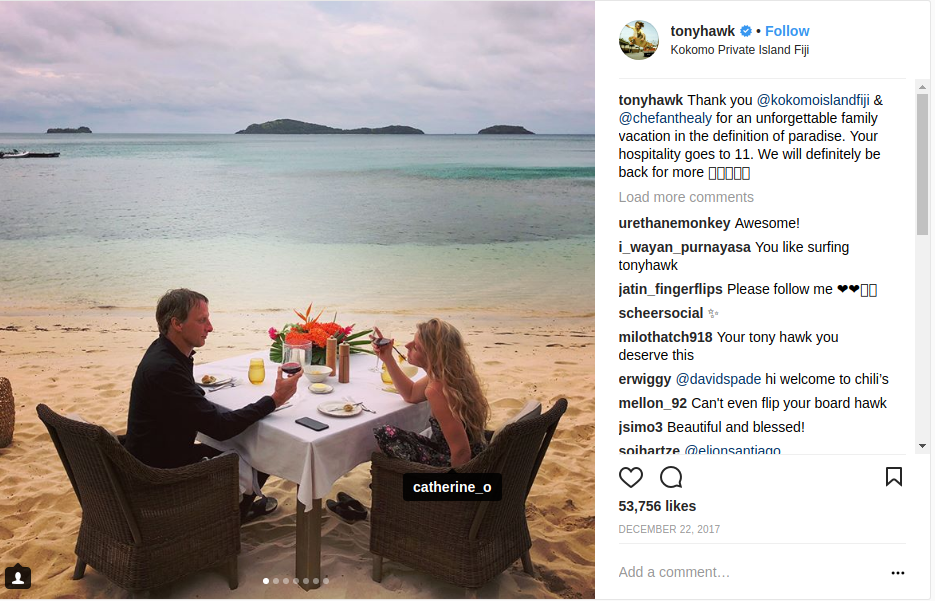 Hawk has four children from his previous three marriages, which all ended in divorce. He has three sons named Riley (25), Spencer (19), and Keegan (16), as well as a daughter named Kadence Clover (9).

Although Hawk’s car collection is modest, he owns the very best that money can buy.

Hawk launched the Tony Hawk Foundation in America to promote skateboarding. So far, he has given away more than $5.2 million to help build more than 550 skateparks all across the U.S.

The foundation especially focuses on projects in low-income areas in all 50 states. It helps poor kids so that they can engage in sports to have a clean and healthy lifestyle.

In 2015, the Tony Hawk Foundation was the proud recipient of the Robert Wood Johnson Sports Award. It was honored for it’s innovative and effective approach to utilize sports to build a culture of good health in communities.

A Beacon of Hope

These days, Hawk continues to be an ambassador for skateboarding, a sport which is growing in popularity all over the world. Since buying skateboarding equipment is relatively cheaper than in other sports, it is easier for underprivileged and disadvantaged kids to take up this sport.

Hawk is trying to educate people and kids that skateboarding is a healthy sport both for the mind and body and could be a ticket to a better life. He is giving hope and direction to kids using his own rich experience as fodder.

As long as there are caring sportsmen like Tony Hawk out there, the kids are all right!

Tony Hawk’s Net Worth Compared to Other Skateboarders