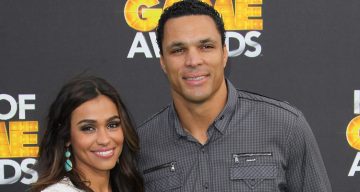 Tony Gonzalez may be the best tight end in NFL history, but his family tends to steal the show outside the gridiron. We’re talking about the former pro’s gorgeous wife, October Gonzalez.

He might be out of the game now, but many NFL analysts believe that Tony Gonzalez is the greatest tight end the NFL has ever seen. But outside the gridiron, he’s happy to let his beautiful wife grab all the attention. He revels in the compliments showered on his wife, October Gonzalez. She’s a regular face on TV, which prompts some fans to message the former footballer letting him know that he’s one lucky guy! If you haven’t seen Tony Gonzalez’s wife or want to know more about her, check out our October Gonzalez wiki right here.

Playing Hard to Get

Tony Gonzalez met October Calinda Vegas-Russell when she was a 21-year-old cocktail waitress at a bar, owned by Dennis Rodman. At the time, Gonzalez was at the prime of his football career. However, she didn’t know who he was. In fact, she brushed off playing football as a hobby! She had a boyfriend then, but he still invited her to a party with her beau.

She rejected his advances for a year, until he asked her out again when she was single. They hit it off, and then dated for four year, until Gonzalez got down on one knee and asked her to be his wife. The proposal was slightly awkward as Tony had a bout of Bell’s Palsy (a temporary facial paralysis) at the time. “He could only smile with one side of his face,” October said. It’s the thought that mattered, and she said yes!

The Fox analyst showed that they are in it for the long haul through a commitment ceremony. Former Kansas City Chief’s fullback, Tony Richardson oversaw the ceremony, which took place in 2007. Gonzalez didn’t have to sign a prenup since they are not legally married, but the two don’t consider each other any less husband and wife.

They have two children together: Malia and River. Gonzalez has a 16-year-old son, Nikko, from his previous relationship with Lauren Sanchez. Nikko was the one who persuaded his father to put off retirement a little longer. Tony Gonzalez went on to make his 14th and final Pro Bowl appearance in 2013.

Happy 10 year Anniversary to my better half. You are the best adventure I’ve ever had and I’m so happy I get to do life with you by my side. Cheers to US. #onedayatatime #bestfriends

The 36-year-old is a professional TV personality, and we’re not just talking about the E! documentary style show on football wives! She’s hosted episodes of Entertainment Tonight and Rachel Ray. She also appeared on The Fab Life and Play it Forward. She currently plays DJ on Fox’s Beat Shazam.

The new show, which is produced and hosted by Jamie Foxx, has teams compete to identify songs played by DJ October. Since the show premiered, Tony Gonzalez’s Twitter has been flooded with compliments for his beautiful wife.

A few years ago, October was competing for a coveted spot on TV. When Jenny McCarthy and Sherri Shepherd left The View, auditions for candidates to fill their spots were held. Not only was October shortlisted, Lauren Sanchez (Tony’s ex and mother of his eldest child) was also up for the spot. They were co-hosts for an episode each as an audition, but neither were selected.

October’s entertainment experience is still lacking as far as calculating her net worth goes. But with Tony Gonzalez’s net worth of $20.0 million, we’re guessing she’s doing just fine.

When Tony was playing for the Atlanta Falcons, the family split time between their home in California and his work in Atlanta. Their kids and October took some to adapt, but they didn’t mind. “We were both born and raised in southern California, so we definitely have more friends and family out there, but we love Atlanta because it’s an opportunity for us to grow closer as a family,” said October.

Tony went from the field to the studio, but it doesn’t mean his schedule is any less hectic. Nevertheless, he squeezes some time in to Skype with the family. The couple has put their relationship on top priority by going on a date once a week. As Tony put it, “With three kids, we made a vow to keep each other first. If you don’t have a strong relationship with each other, the kids can see that. If we take care of each other emotionally, we can take better care of our kids emotionally.”

Part of spending time together also involves philanthropic work for this couple. October and Tony Gonzalez stripped down for a PETA campaign ad and also support other charities.