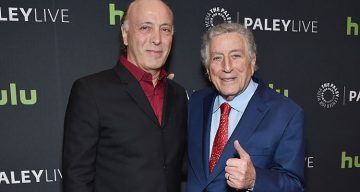 Some voices in music never go out of fashion. They’re timeless and people just get reminded about how great they are. Al Jolson, Bing Crosby, Frank Sinatra, Aretha Franklin, BB King…the list goes on and on. And it wouldn’t be complete without Tony Bennett. With Tony Bennett’s birthday last August, the singer reached the milestone of turning 90 years old! With such a great history of singing and performing, a Tony Bennett wiki is in order to examine the life of this great American singing talent.

#1 His Stage Name—Even some die-hard fans don’t know that “Tony Bennett” is not in fact his real name! It’s Anthony Benedetto, and he was born in Astoria, Queens, New York on August 3 1926.

#2 Family Background—Some fans have speculated about Tony Bennett’s family background, asking “Is Tony Bennett Jewish?” or “Maybe he’s mixed Irish and Itatian…?” In fact, Tony Bennett is the son of one Italian immigrant and one second generation Italian American. His father, John Bennedetto, came from near Reggio Calabria in the south of Italy, while his mother Anna was born in the U.S. to parents originally from Calabria themselves.

While Tony’s father was in the grocery business, his frequent illnesses coupled with the family’s raising during the Great Depression of the 1930’s resulted in his family, including two older siblings, growing up poor in New York. He studied music and painting at the famous School of Industrial Art, where other renowned creative types like Wizards animator Ralph Bakshi, Spiderman comic artist John Romita, and Clueless director Amy Heckerling, also studied. However, due to the poor financial conditions of his family, Tony Bennett left school at 16 to help support his family.

#3 He’s a War Vet—Many people can appreciate Tony Bennett’s songs, but they might also wish to appreciate his service record, as well. An army draftee back in 1944, Bennett underwent hard basic training and then partook in extreme infantry campaigns across Europe during World War II. While he survived, Tony Bennett was nearly killed several times and it has since made him a die-hard pacifist and vocal opponent to the United States’ involvement in global conflicts ever since.

#4 Rags to Riches—After leaving the army, Tony Bennett studied at the American Theater Wing, while waiting tables to help earn extra income. He’s credited the bel canto singing style he studied and regularly used throughout his career to help keep his voice in shape. As he slowly gained fame, he scored hits with “Because of You”, “Blue Velvet”, and “Stranger in Paradise.” Over time, Tony Bennett has become identified with signature tunes such as “Rags to Riches”, “The Best is Yet to Come”, and “Chicago,” many of which he features in his stage acts to this very day.

#5 He’s Earned a Lot—With over 55 albums to his name and umpteen awards on his mantle, it is no surprise that Tony Bennett’s net worth has been placed at $110 million!

#6 He’s No Stranger to Struggle—Despite his success, Tony Bennett’s professional life has not been without hardship. Other forms of music, including early rock and roll, psychedelic rock and even rival adult contemporary singers have all done their share to partially eclipse Tony Bennett’s musical success. He tried his hand at acting in 1966’s The Oscar. The film that was colossal critical and commercial flop that it turned both Bennett and the film’s scriptwriter, acclaimed science-fiction/fantasy scribe Harlan Ellison, off future film work entirely. Despite his fame in the post war years, he found himself divorced, out of fashion with modern listeners, and struggling with a hard addiction to cocaine by the 1970’s.

#7 The Tony Bennett Family—Tony Bennett has been married 3 times. He and his first wife, Patricia were married for over a decade until they separated as result of his constant touring, plus her accusations of his infidelity. He later married actress, Sandra Grant and started a family. Tony Bennett’s kids include daughters Joanna and Antonia, the latter being a singer herself. He also had sons, Danny and Dae. Danny Bennett assisted his father in dealing with his struggles with drugs, gaining control of his dwindling finances, and helping his father revitalize his music career. Dae Bennett is a recording engineer, and he’s recorded his father amongst others. Currently, Tony Bennett is married to Susan Crow, a teacher from New York that he’d been involved with since the mid-1980’s. Together, they opened the Frank Sinatra School of the Arts in Queens in 2001, a specialty high school focused on teaching arts and related programs.

#8 He Likes Collaborations—Tony Bennett’s Christmas Special and recent duets with popular modern performers like Lady Gaga and the late Amy Winehouse have brought him popularity with younger crowds. But he’s actually been collaborating with other great peers for decades. Performers as varied as Elvis Costello, KD Lang, Billy Joel, Queen Latifah, Willie Nelson, Stevie Wonder, Vicente Fernández and Art Blakely, not to mention his use of songs by classic writers such as Hank Williams and Cole Porter have all been put to good use by Tony Bennett. He was the first male vocalist to sing with the famous Count Basie Band and has recorded frequently with the best in jazz. Overall, Tony Bennett’s appreciation of various music styles (including everything from pop to blues to country) make him stand out from other solo performers like no other.