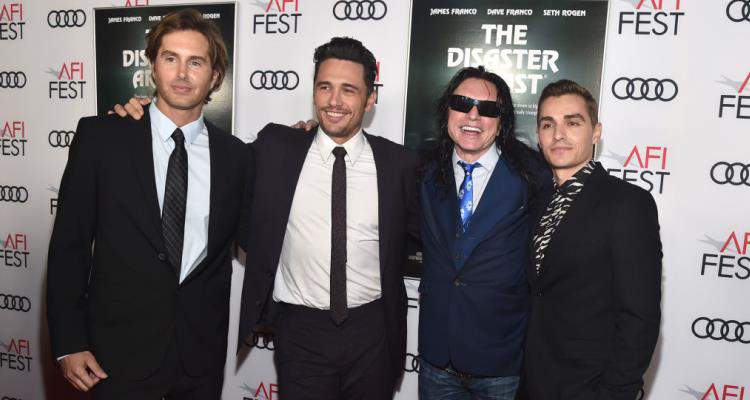 With the release of The Disaster Artist this week, a lot of attention is once again being focused on the writer, director, and star of The Room, Tommy Wiseau. For those who are just being introduced to the weird world of The Room, Wiseau is an interesting figure. He sounds like Dracula, he dresses like a teenage grunge fan, and he is always quiet about his past and personal life. So, how did this guy get a movie made about him? By making one of the worst movies ever made, that’s how! How much money does Tommy Wiseau make? You will be amazed. In this article, we’re going to take a look at Tommy Wiseau’s net worth for 2017 and try to explain how the worst movie in the world became a phenomenon that has Wiseau laughing all of the way to the bank!

Okay, the first thing you need to know about Tommy Wiseau is that his life (up until the point that The Room began shooting) is shrouded in mystery. What we know about Wiseau is very little. We do know that “Tommy Wiseau” is not his original name and that he took his last name as an ode to bird toys he once sold, using the French word for bird, oiseau, then adding “W” to it which is allegedly the first letter of his birth name. His current full name is Thomas Pierre Wiseau. After years of speculation, Wiseau confirmed on Jimmy Kimmel Live that he is originally from Europe, after years of ignoring the question. As to where in Europe, it’s hard to say but some people claim that they’ve tracked Wiseau’s origins to Poland. But he claims to have grown up in (and have family in) New Orleans. Trying to get more out of him beyond that usually ends up with a non-answer or an abrupt “next question.” As mysterious as Tommy Wiseau’s life is, pinpointing where Tommy Wiseau’s money came from is just as cryptic.

How big is Tommy Wiseau’s house? It’s unclear if he even lives in one, although there is a story where Wiseau may have made his fortune from real estate, including possibly owning an apartment building. As for Tommy Wiseau’s wife and kids? It looks like Wiseau is unmarried with no children but rumors do persist that The Room was inspired by a love affair gone bad.

Wait… How Much Did The Room Cost?!

The Room was an independent film made by someone who clearly did not know how to make a film. For example, when you watch The Room, you will notice that most scenes are not centered properly and the quality (of both the acting and filming) is horrible. That’s because Wiseau couldn’t decide whether to shoot it in HD or film, so he shot it on both at the same time by creating a camera rig with the cameras sitting side by side. That is how bad this movie is! Knowing this, you should also know that this film reportedly cost an astounding $6.0 million to make! For those have seen the movie, this seems absolutely insane as it has also been dubbed ‘the worst film of all time.’ So, where did the money come from? The truth is, no one knows! We know that Wiseau was independently wealthy at the time, but as to how that money was earned is up for debate. Reportedly, much of the money was made from his clothing company, Street Fashions USA, that sold irregular blue jeans at discounted prices. Greg Sestero, who was an actor and producer on The Room, related a story on the podcast How Did This Get Made? He said Tommy may have received some of the money from his supposed ESL teacher, but that’s never been outright been confirmed. According to reports, during filming, many of The Room’s actor’s even wondered if the movie was some sort of tax dodge or money laundering scheme! Independently financed, independently released, The Room promptly bombed… for a while, that is. (If you can sit through the original 2003 trailer for The Room starring Tommy Wiseau, check it out below!)

Bad Movie, But Not Bad for the Bank!

As of this writing, Tommy Wiseau’s net worth is reported $500,000 by many sources but if we had to guess, that may be kind of short—unless he’s still trying to recoup the money from The Room’s production! The Room didn’t do much in the way of box office in the beginning, as it was only released in one theater in California. But slowly, word got out and the film actually became a cult phenomenon! Wiseau has sold thousands, maybe millions of copies of the film through his website and as of this writing, that’s the only way you can get a copy of the film, as it is not available on services like iTunes. He also sells t-shirts, watches, and hats. After the film became famous for being so bad, Tommy Wiseau’s merchandise, like backpacks and even Tommy Wiseau underwear, have been made and are sold online on his website. Wiseau has also turned this into an opportunity to continue acting. Tommy Wiseau’s movie credits have increased with films like The House That Drips Blood and Samurai Cop 2: Deadly Vengeance, as well as a cameo in The Disaster Artist. Tommy Wiseau’s TV shows include The Neighbours and The Pet Squad Files.

With talk of The Disaster Artist possibly getting Oscar nominations, Wiseau may have made one of the worst movies in history, but at the end of the day, it might be Tommy Wiseau laughing all the way to the bank! The Disaster Artist hit theatres today and fans have high hopes for this James Franco-directed film. It is an American biographical comedy-drama film centered around the life of Tommy Wiseau and his making of the cult classic, The Room. Oh, and as an added bonus, James Franco stars as Wiseau, alongside his own brother Dave Franco, who plays Greg/’Mark.’ Be sure to check it out this weekend, and before you do, check out the trailer below!